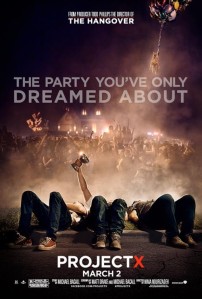 Synopsis: 3 high school seniors throw a birthday party to make a name for themselves. As the night progresses, things spiral out of control as word of the party spreads.

Thoughts: Even though I’ve seen this trailer several times every time I hear the title I think it’s going to be a remake of the 1987 Matthew Broderick/Helen Hunt film of the same name.  While clearly not about a secret government project using chimps as simulated test pilots, this Project X looks like a movie that was made by chimps.  I’m not using quotes from advanced screenings saying it’s the “best party movie of all time” and that it “makes Superbad look like s**t” is a ringing endorsement of the Next Big Thing.  No matter, in the slim pickings that movegoers will have over the next few months you can expect this one to make a decent pile of money opening weekend.