(*) are next to the categories I predicted correctly and for the ones I missed, the winner is included in {}

*Actress in a Leading Role Meryl Streep in “The Iron Lady”

*Actor in a Supporting Role  Christopher Plummer in “Beginners”

*Actress in a Supporting Role Octavia Spencer in “The Help”

That makes a grand total of 15 out of 24…not my best but I was actually happy I was wrong about a few of them!

Overall it was a good telecast with Crystal reminding us why he is such a damn fine host.  It didn’t feel overlong and the show was reservedly flashy without being over the top or dull.  The witty banter was kept to a minimum and no one went too crazy.  Good speeches and good looks capped off a night that was very “Old Hollywood”.

Is it wrong that I’m already looking forward to next year?

What did you think?  Feel free to comment away!

Oh…and don’t forget to vote in my poll! 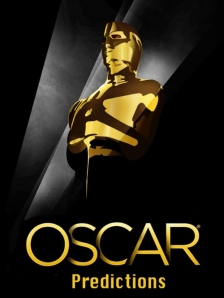 There comes a time in every movie lovers life (OK…once every year) where you have to buckle down and stick by your predictions for the Oscar winners.  What follows is who I think will be taking home the gold this year…it’s not to say it’s who I necessarily think SHOULD win but who I think will win.  Some of them are so close (Best Actor and Best Actress) for instance that I’m not going to beat up on myself if I make the wrong selection. There were so many great movies/performances/acheivements this year that I’m not overly concerned with having the most right.  After all, I’ve seen the majority of movies nominated so some of it is purely opinion based.

Take a read…and let’s see how many are on the money.

Actor in a Leading Role George Clooney in “The Descendants”

Actress in a Leading Role Meryl Streep in “The Iron Lady”

Actor in a Supporting Role  Christopher Plummer in “Beginners”

Actress in a Supporting Role Octavia Spencer in “The Help”

Sound Editing  “The Girl with the Dragon Tattoo” Ren Klyce “ 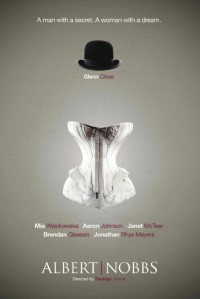 Synopsis: A woman is passing as a man in order to work and survive in 19th century Ireland. Some thirty years after donning men’s clothing, she finds herself trapped in a prison of her own making.

Review: Much like our title character, Albert Nobbs is a quiet and strange little film.  It’s a film where everyone speaks in a mannered, even tone barely loud enough to hear.  It is, after all, the final years of the 1800’s where manners and status were paramount.  Set in Ireland, our tale is a delicate one that is handled with care and respect.  At the end of the day I think it may have been a bit too quiet, mannered, and delicate to remember the movie as a whole, though the performance of Close is one to look upon with praise.

Albert Nobbs works in a hotel run by uppity Mrs. Baker (Collins) as a butler and has a secret.  He’s actually a she…more comfortable in a suit than a dress Nobbs has lived his life fully as a man.  Close originally performed this role onstage back in the early 80’s and she has worked for the following decades to bring Nobbs from stage to screen.  I think this Nobbs works better than it would have if Close had gotten this made when she was younger.  Now, Nobbs has some more life lived in him and the whole feelings of wanting to share his life with someone resonates more.  Close fills each look and gesture with feeling – bringing you with her as Nobbs reaches out for companionship first out of necessity and then out of love.

McTeer shines in a supporting role as Hubert Page, another female masquerading as a male.  What works so well in this movie is that the whole deception is not used as a plot device where women have to dress up like men for advancement.  Close and McTeer play women who simply live their lives as men because that is what they feel deep in their core.  Page is a handyman of sorts and when he is put up with Nobbs for the night he discovers the secret.  When Nobbs learns that Page has lived a life parallel to his, you can see the dawning on his face that he is no longer alone in this secret life.  When Nobbs sees the normal life that Page has set-up (a wife, house, job) he begins to desire that for himself too and starts to pursue young Helen (Wasikowska) who herself is in love with a rough lad that is wrong for her (Johnson).

The movie makes for a pleasant but at times frustrating examination of the lives of these people.  Nobbs is so used to being invisible that when he finally reaches out for love it’s to Helen who we see is undeserving.  It doesn’t help that Wasikowska makes for a bland love interest.  Aside from Jane Eyre where her blank face-edness worked in her favor, I’ve not been on her bandwagon.  Her line readings seem rote and her subtlety lulls you into slumber.  Would the role have been played by a different actress some of what happens later in the film may have landed better.  McTeer has a tough role here but ultimately is a winning presence and a bonus for the film (though I still wouldn’t have nominated her for an Oscar over Shailene Woodley from The Descendants).  Johnson and Collins are both strong in their roles as is Gleeson as a kindly doctor.

Director García puts a nice touch on the Irish setting and has good attention to framing his shots, he wisely lets the story unfold on its own terms and doesn’t push the audience into an uncomfortable narrative.  I enjoyed the score by Brian Byrne and Close adds lyrics to a lovely closing credit song sung by Sinead O’Connor.

Speaking of Close, in any other year her performance may have netted her that elusive Academy Award.  I find myself never bored while watching her whether she is playing characters like Nobbs, unhinged women, or supportive wives/mothers.  It’s still a mystery why she hasn’t taken home the Oscar but I feel her time is coming…most likely in a supporting role within the next five years.  This movie was clearly a labor of love and it was not all for naught.  Albert Nobbs is a strong picture with performances to recommend…even if the movie itself may be too formal on the whole.