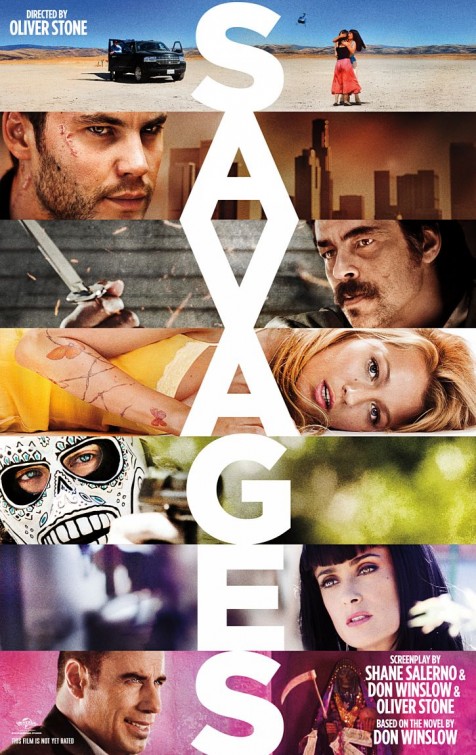 Synopsis: Pot growers Ben and Chon face off against the Mexican drug cartel who kidnapped their shared girlfriend.

Thoughts:  Trouble-making director Oliver Stone has been a bit under the radar of late.  He appears to be bursting back onto the scene with the gritty new trailer for Savages.  Boasting some hot young talent, Stone has always been successful at taking squeaky clean stars and roughing them up a bit.  Taylor Kitsch and Aaron Johnson are seeing their Hollywood status rise and Blake Lively (taking over for Jennifer Lawrence who chose The Hunger Games over this) has already proven she’s more than a Gossip Girl in 2010’s The Town.  The only thing that gives me pause is the presence of Benicio del Toro – an actor with an appeal I still don’t get.  Two interesting hairstyles are also front and center in the preview…Salma Hayek’s extreme bangs and blunt cut mirror her blunt line delivery and its nice to see John Travolta finally embrace his receding hairline (are you taking notes, Nicholas Cage?)  While the film looks to be fairly hard nosed I’m happy Stone is back in a zone he works well in.