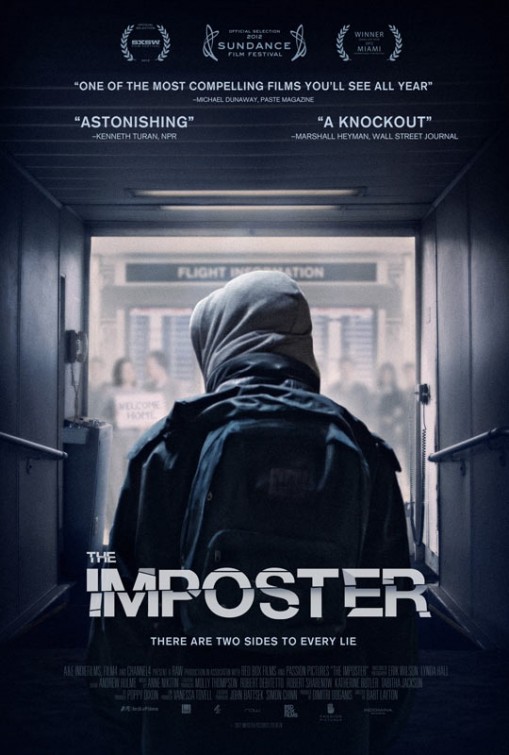 Synopsis:  A documentary centered on a young Frenchman who convinces a grieving Texas family that he is their 16-year-old son who went missing for 3 years.

Thoughts: I love a good true crime documentary and one glance at the trailer for The Imposter and you know a gripping ride awaits you.  With elements of a real life Changeling, this doc looks to be a slickly produced and dangerously dark journey that…well…you can read the description for yourself.  What excites me about this is that The Imposter is produced in association with A&E Indie films who also gave us some of the better documentaries of the last decade (Client 9, The Tillman Story, The September Issue, American Teen, Jesus Camp to name a few).  I get the feeling there is a layer of dramatic reinterpretation employed so here’s hoping the doc doesn’t come off as an episode of “Unsolved Mysteries”

Synopsis: In a twist to the fairy tale, the Huntsman ordered to find Snow White in the woods and kill her winds up becoming her protector and mentor in a quest to vanquish the Evil Queen.

Review:  The second film this year to focus on the Snow White fairy tale is a huge improvement over the tragedy that was Mirror Mirror.  Where Mirror Mirror failed so triumphantly was messing around too much with the source material and focusing wasted efforts on sumptuously ordinary visuals.  It didn’t help that Mirror Mirror was across the board miscast.  Snow White and The Huntsman rights a lot of wrongs from Mirror Mirror by staying close to the original Brothers Grimm cautionary tale of vanity vs. beauty and gathering a cast that’s up to the challenge of the material.  While still not the fairest Snow White of them all, it’s a nice distraction of escapist entertainment.

You can blame Stewart for the first problem with the film – by casting her as the star the movie has to get to her fast and that means bolting through a prologue that could have been developed a bit more.  While a decent back-story to how Snow White comes to be imprisoned in a tower cell by order of her evil queen stepmother (Theron) is on display, I still craved a bit more time with the younger Snow White to see what her life was like from her young days to the late teenager that is taken on by Stewart.

It’s a good thing, then, that Theron plays such a big part in this opening prologue because once Stewart is on hand Theron is relegated to a smaller role than the film advertises.  Once Theron is told by her albino brother that she can be beautiful forever by eating the heart of young Snow White, it’s clear that the displaced Princess needs to get outta dodge by any means necessary.  Escaping to the Black Forest is no safe haven and the titular huntsman (Hemsworth) is deployed to bring her back for dinner.

So what happens in the Black Forest you may ask… Well, a little magic, some solid if unremarkable special effects, and a meeting with seven little men that are played by an assortment of digitally shrunken familiar character actors.   It’s all very standard stuff and if it’s not totally the fault of the actors onscreen, one does wish that someone would do something of note to make a lasting impression.  As it is, the movie feels like a mash-up of The Lord of the Rings, Willow, and (not surprisingly) Twilight.

Yes, Stewart gets caught in yet another long triangle between The Huntsman and a boy (Claflin) she has grown up with and has been reunited with by chance.  Neither seem totally right for her…or maybe she doesn’t seem right for them as Stewart’s take on the role is decidedly glum.  An obvious comparison to the Twilight series aside, the romantic subplot is thankfully not given a lot of screen time which helps the movie considerably.

Theron makes the best of a role that gets more underwritten as the movie progresses.  It’s as if screenwriters Evan Daugherty, John Lee Hancock, and Hossein Amini started off by writing a movie centering on the queen but gradually caved to studio pressure and changed direction.  The movie is even less about the Huntsman, so much so that you keep wondering where all of Hemsworth’s good scenes went.  Hemsworth isn’t a bad actor…and he’s having a good year with Cabin in the Woods, The Avengers, and now this…but he disappears from memory as soon as he’s off-screen and that’s not what you want in a title character.

Ok…back to Theron because she was the reason I was most interested in the movie to begin with.  Sad to say that her best scenes have been spoiled in the trailer — some scenes from the preview don’t even appear in the movie at all. (The scene with her screaming as glass shatters around her?  Doesn’t happen in this cut.)  The film practically forces her to go over the top and she rises to the challenge with varied results.  Theron is a proven talent and I believe she’s smart enough to have done all she could with admittedly weak material.  That being said, she looks amazing even when she grows old and starts to wither…it helps she’s the showpiece in Colleen Atwood’s incredible costume design.

While the film has cast (mostly) interesting performers, it does have some major drawbacks that can’t be ignored.  There are serious gaps to the logic of the piece and the continuity of magic.  I’m not saying that a fantasy fairy tale has to make perfect sense but if the film is going to set boundaries it needs to play fair and stick to it…I think there were a few scenes that contradict what happens earlier but to be sure I’d have to see the movie again.

Another big gripe of mine is accents.  Why does every movie that takes place in a far far away land have to have an English accent?  And if you are going to have an English accent, for the love of Lassie make sure your actors are consistent.  Theron and Stewart switch out of their accents more than Theron switches costumes.  Why couldn’t they just use their own accents (I would have loved to hear Theron use her native South African accent…but evidentially she is reluctant to do so) and why does the Huntsman have a totally different accent than the rest of them?  It’s one of those things that drives me crazy in movies and it’s true here as well.

It’s a bit of a miracle that Universal trusted their 170 million dollar picture to a first time director but it’s clear that Sanders knew what he was getting himself into.  He’s put together a perfectly fine movie with a perfectly fine cast and perfectly fine visual effects.  What would it have taken to make the movie really take off, though?  It could be that this source material has already been done the best it could be in Disney’s uber classic animated film from 1937…or perhaps it’s a film that needs to buck 20th century wisdom and play up the quaintness that has made Snow White endure for so long.  Until then, we’ll have this film as a nice twist to the tale and Mirror Mirror as a prime example of how NOT to update a childhood favorite.