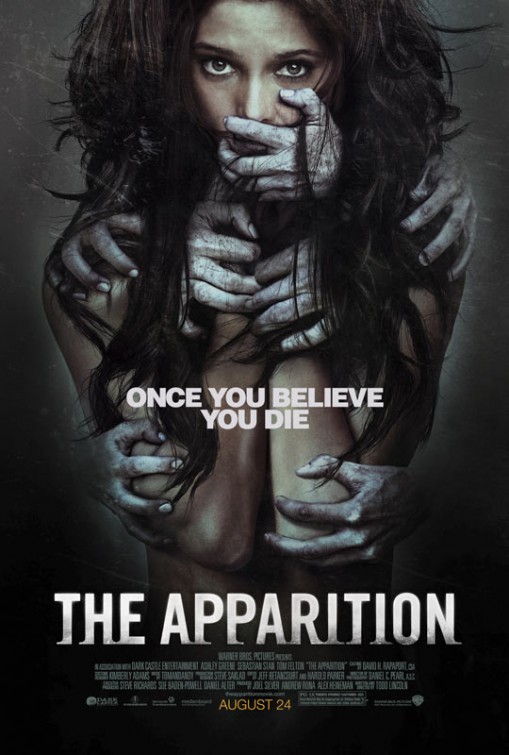 Synopsis:  A couple are haunted by a supernatural presence that is unleashed during a college experiment.

Thoughts: Today’s preview is for a late summer horror film that hopes to snag audiences hungry for outright scares.  The overlong trailer may wind up giving too much away and it’s a shame that it starts off as another found footage creeper which could send audiences the wrong message.  I was a bit bored until the final shot that delivers a nice dose of goosebumps.  Dark Castle Entertainment is producing this one and their success rate is about 50/50.  I enjoyed the schlocky remakes of House on Haunted Hill and House of Wax and their original thriller Orphan provided superior thrills.  On the other hand, I was decidedly non-plussed with The Reaping and Thir13een Ghosts.  A huge horror fan, I can’t imagine I’ll pass this one up in the theaters but my expectation bar is at ground level.

Synopsis: A look at the lives and relationships among girls at an elite British boarding school.

Review:   One of the nice benefits to being a movie nerd is occasionally running across a movie you’ve never heard of before, seeing it, and feeling as if you’ve found a hidden gem.  While reading reviews of Dark Shadows (admittedly to see how many times Michelle Pfeiffer was referred to) one reviewer mentioned Green and this indie UK film of hers from 2009.  Describing the wacky witch she played in Dark Shadows as running parallel with the “unhinged” Miss G of Cracks my interest was piqued.  Well, one InterLibrary Loan later (seriously, have you visited your library lately?) I had the movie at my disposal.  I had originally planned to start it late at night and see how far I got…and 104 minutes later I turned it off as the credits ended.  Cracks is one of those movies that has the potential to get under your skin and may require a few viewings to appreciate.  Even seeing it once I don’t feel I caught everything that was presented…but what I did see I liked.

Set in the woodsy countryside of the mid 20th century England, Cracks is the debut feature film for Scott (daughter of Prometheus director Ridley Scott and niece of Top Gun director Tony Scott).  Daughter Scott evidentially has paid close attention to the work of her famous father and uncle (who also, incidentally are producers of this film) and turned in a visually strong and nuanced tale of misplaced intentions and the dark side of innocent obsession.

Obsession is clearly the theme of the picture.  Pecking order obsessed students are transfixed with teachers and vice versa, so much so that at one point nearly all of the parties involved are blindly following the object of their desires.

The film opens with our introduction into the hierarchy of the boarding school, showing Di (Temple) clearly the alpha female of our group.  She seems to be the classic teacher’s pet to the fascinating Miss G (Green) and the girls idolize her.  There’s not much history of how the girls came to fall under her spell or why at a school that values obedience Miss G and her girls get a lot of leeway but it’s no matter.  The audience is quickly invited into this inner group of privilege to witness what happens when a stranger is introduced into their mix.

Fiamma (Valverde) is a Spanish immigrant of status that shows up halfway through the term and instantly becomes an adversary of Di.  Without even trying, Fiamma catches the eye of Miss G and soon Di is yesterday’s news and plotting revenge on the lonely girl.  Fiamma is no slouch, though, and challenges many of the accepted behaviors at the school, to the increasing chagrin of the group of mean girls.  How it all plays out and the consequences that befall those involved is not totally unexpected but it’s one crisp journey that gave me a few shivers.

Cracks is not a horror, thriller, or Fatal Attraction-esque film…it’s too refined for that.  It’s a psychological drama that chooses to spend its running time showing us these characters rather than simply have them speak everything they’re feeling.  More is conveyed with lighting, music, and directional force than in expositional dialogue.

It helps that the movie is stacked with a fine ensemble of females (with hardly a male figure in sight) who each carve out a place in the film that feels right.  Heading the cast is Green, an actress that has made some interesting choices in her career.  From Casino Royale Bond girl to previously mentioned Dark Shadows witch she is clearly attracted to women with a dark side that she can plumb the depths of.  Miss G might be her darkest yet and an entire movie could have been made out of Green’s interpretation of the role.

In a movie without any true heroines, you have to settle for the next best thing.  Temple and Valverde both play flawed young ladies that have hefty baggage that colors everything they do.  Temple could easily have turned Di into a one-note jealous rage-r but wisely gives her a softness when you least expect it.  Equally thoughtful is Valverde’s effort as a not-so-helpless outsider that realizes too late that she’s treaded into a hornet’s nest.

Cracks is one of those movies that most people will miss or skip and that’s a crime.  While far from Oscar worthy, it’s a very fine first effort from a new generation of Scott filmmakers.  I look forward to her future efforts – if they are all made as clever and engaging as this she’ll be making her own name for herself in Hollywood quite soon.