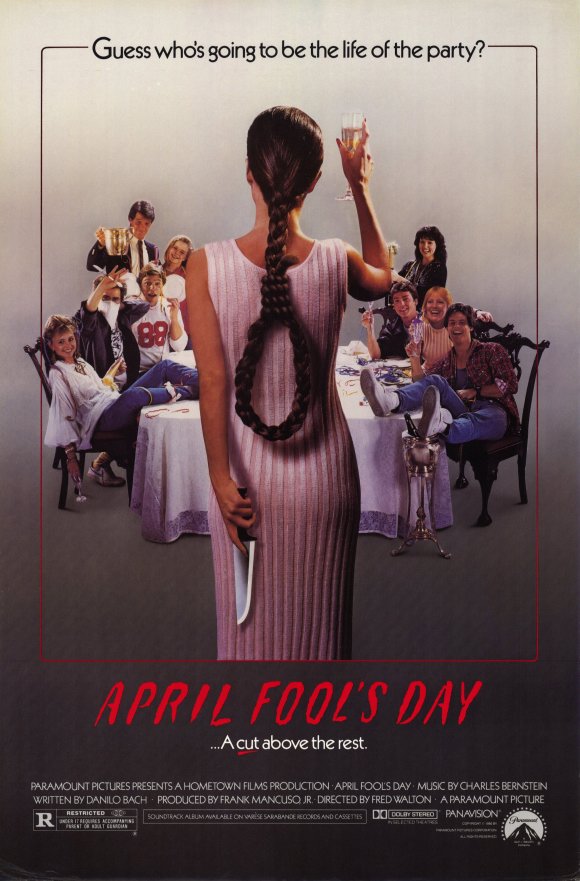 Synopsis: A group of nine college students staying at a friend’s remote island mansion begin to fall victim to an unseen murderer over the April Fool’s day weekend.

Review:  Back in 1986, Hollywood was neck deep in the teen slasher genre.  Classics like Halloween, Friday the 13th, and A Nightmare on Elm Street had already spawned sequels and a number of inferior imitations all set up to cash in on the horror craze that proved to be box office gold.  Though by the late eighties the masked madman set-up was played out it would find resurgence a decade later when Scream kickstarted a new wave of the next generation of slasher film.

In between the sequels and cheap-o knockoffs, there were a few respectable entries that fell victim to guilt by association and weren’t given their fair shot in their initial release.  I feel like April Fool’s Day is one of those films – though no classic it’s a well-made and well-acted horror with a nice smattering of comedy heaped in on top.  It’s genial fun that knowingly places itself a few rungs down from its blood and boob soaked cousins, favoring atmosphere to shocks.

That’s one of the main reasons I feel that the film was ignored by many when it was released and only caught on later when it was broadcast endlessly on cable.  There’s not a huge amount of yuck-o payoff that most blood starved teen audiences were craving.  I was first attracted to it by the clever cover and simple set-up that is quite reminiscent of an Agatha Christie yarn.  Updating Christie’s And Then There Were None to the 80’s and throwing in some comedy along the lines of Porky’s, April Fool’s Day works on several enjoyable levels.

The first success is in its casting with fresh faced members of 1986 young Hollywood, none of which went on to do much on the big screen.  There’s an easy-going quality about the acting that doesn’t scream Acting 101, making it easier to tolerate some of the cliché dialogue and workmanlike pacing.  It’s trim running time works to its advantage, though, by forcing the film to break out of the gate quickly…there are several sequences that are nicely set-up, especially the final half when it really kicks into gear.

Atmosphere is too often dismissed in films of this nature just so we can get to the gory stuff.  April Fool’s Day is surprisingly light on gore and blood…it insinuates more than it shows.  That restraint works perfectly for the story that is unfolding so the mystery is a bit more interesting to solve and the twists less obvious.  That’s not to say it won’t be difficult for the casual movie-goer to catch on where the film is heading…but you may be surprised on how it gets to the final reel.

Director Walton helmed the nail-biter When a Stranger Calls (the original, not the dreadful remake) so he knows how to create dread from everyday circumstances.  He keeps the camera moving when it’s appropriate and leaves things just out of our eyesight to keep us guessing.  Foreman was always my favorite underrated 80’s actress (see her work in Valley Girl to get my point) and here she’s a delight as the hostess with a few tricks up her sleeves and skeletons in her closet.  Steel was no stranger to horror having starred in Friday the 13th: Part 2 and she brings that same heroine pluck-ishness to this film.

So maybe you’ve seen this and think I’m totally crazy for liking it the way I do.  Having rewatched it again recently I still was struck by how nice it looks and how strong the technical elements are.  Though it may weaken a bit with each viewing, there’s something to be said for your first time.  Like the tagline says, this one is “a cut above the rest” and is a harmlessly enjoyable gem that deserves a look-see.