Synopsis: Follow National Geographic photographer James Balog across the Arctic as he deploys time-lapse cameras designed for one purpose: to capture a multi-year record of the world’s changing glaciers

Review:  With a hot button issue like global warming sometimes the old adage seeing is believing is the most apropos statement to use.  There are many who dispute some significant scientific facts that our climate has changed massively over the last several hundred years – these are the people that should be lining up to see Chasing Ice which aside from being a stunning documentary is yet another cautionary tale about how the world population is contributing to the greenhouse effect.

Though these discussions are decades old, global warming was brought to the attention of the worldwide media with the release of 2006’s An Inconvenient Truth, an Oscar winning documentary featuring former presidential candidate Al Gore walking us through a spruced up lecture on the looming crisis facing our environment.  That was a movie filled with lots of facts and numbers, all convincing evidence but when I watched that film I felt like I was doing homework all over again.

Chasing Ice is in a similar vein but it strips away heavy political overtones in favor of photographic evidence to support scientists’ theories that the large glaciers in places like Canada, Greenland, Antarctica were shrinking at an alarming rate.  Following three years of study by respected nature photographer James Balog, the film takes you along as Balog identifies a concern and figures out a way to elevate that concern to a national level.

Instead of the film being just another “wake up!” documentary, the angle taken here is to follow the man looking for answers rather than simply following the question itself.  It’s clear that Balog invests himself fully in the project (we seem him undergoing painful knee surgery and weeping when one of his cameras fails to work like he hoped it would) and it’s his determination that keeps the film moving along.

Working closely with Balog helps director Orlowski fashion a rhythm to the film, though even at 75 minutes it does strain to make it past the finish line…resulting in an overall experience that felt akin to seeing a film at the OmniTheater.

It’s hard to argue though that the evidence Balog and his team gather isn’t both breathtaking and heartbreaking at the same time.  What the future holds for the next generation is anyone’s guess but it’s clear that the problem is real and isn’t going away without some serious changes in how we treat our world.

It’s interesting to note that this was one of the first films I’ve seen in a long time where every single audience member remained in their seat until the final frame.  Though the credits are short (and set to the Oscar nominated original song “Before My Time” performed by Scarlett Johansson), it’s seemed that the audience was riveted enough to stay until the very end. 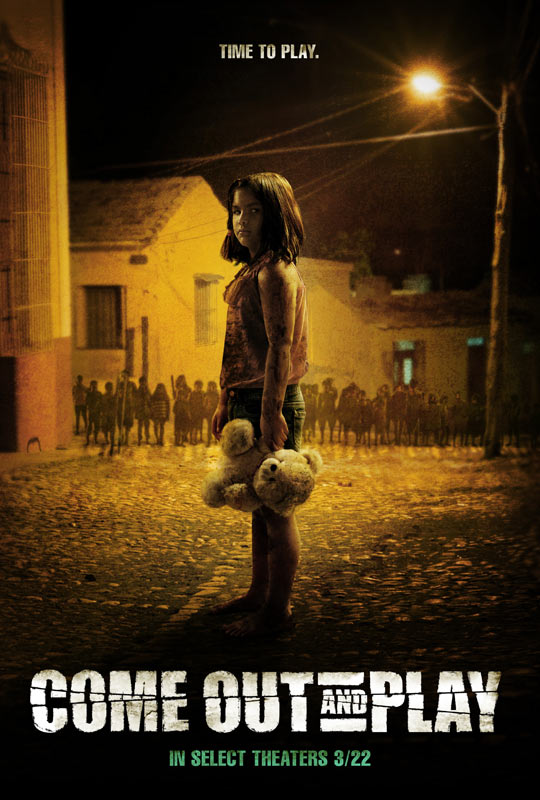 Synopsis:  A young married couple are on a holiday together when they venture to a beautiful, but highly remote, island. When they arrive, they notice that while there are plenty of children present, the adults all seem to be missing.

Thoughts: Though it looks like a straight-up remake of the messy 80’s creep-fest Children of the Corn, Come Out and Play is actually an update on a 1976 Spanish film.  This sinister looking film has a trailer that gave me the willies…children are scary enough but make them emotion-less psychos and you’ve got a nightmare waiting to happen.  I like that most of this seems to take place in the daylight…it’s so easy to play off of our fears of the dark to scare us so keeping it brightly lit always tells me you are working with a confident production.  Even with so-so actress Vinessa Shaw (Hocus Pocus, Side Effects), this could end up being an effective horror film if done right so here’s hoping that everything falls into place for a nicely done spook out experience.