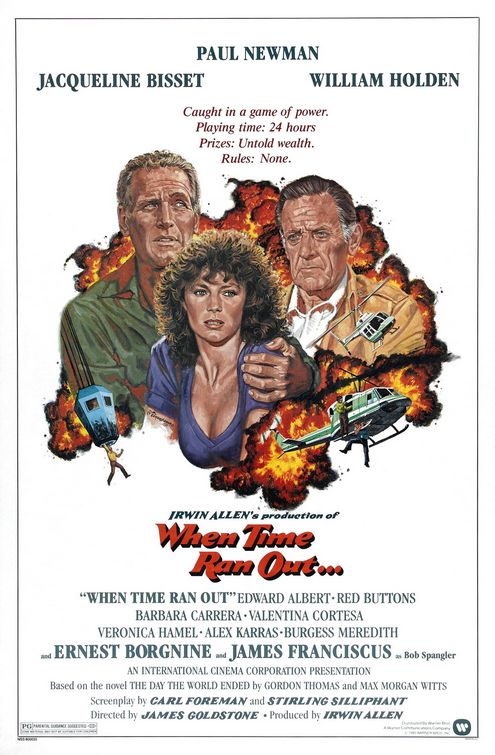 Synopsis: An active volcano threatens a south Pacific island resort and its guests as a power struggle ensues between the property’s developer and a drilling foreman.

Review:  You’ve probably never heard of this movie and that’s not a bad thing. This 1980 disaster flick arrived on the tail end of nearly a decade’s worth of films that covered all sorts of natural disasters and featuring a cavalcade of stars ripe for the offing.  Our three leads here even headlined some of the more popular offerings of the genre with Newman and Holden starring in The Towering Inferno and Bisset appearing in the granddaddy of them all…Airport.

Long before Volcano and Dante’s Peak made volcanoes fashionable again, When Time Ran Out…’s explosion spewed its lava over an island in the pacific.  This was the final nail in the coffin of this particular era of film and rightfully so…the effects are laughable and the forced romantic tensions even worse.  It plays more like an episode of The Love Boat than any kind of movie with a sizable budget.  You may find yourself asking when time will run out on your patience as it unspools at a mind-numbing 121 minutes…even worse is that the film takes forever to get going and once it does it sputters along until the conclusion.  There are so many better films to explore, it’s best to leave this one alone.