Synopsis: A man awakens from a coma to discover he has a psychic detective ability.

Review: I find it difficult to think back to a time when films made from Stephen King novels weren’t saturating the cineplexes.  For a while, the author’s novels were brought to the screen with frightening regularity…even if more than a few of the books and short stories didn’t exactly lend themselves well to the big screen treatment.  Still, for every turkey like The Lawnmower Man and Thinner audiences struggled through there were a healthy dose of winners.  Even though it’s not exactly what you’d expect from a King novel, The Dead Zone remains a qualified success thirty years after it opened.

Released in 1983 (the same year as Cujo and Christine), The Dead Zone is more thriller than horror with a strangely episodic nature for a genre film.  It’s no wonder the source material was turned into a successful Canadian television series for several years because it’s easy to see how King’s general set-up (man wakes from a coma to discover he has psychic powers) could lend itself well to weekly self-contained storylines.

Opening with Michael Kamen’s haunting score over picturesque views of the small New England town the film takes place in, it’s not long before quiet schoolteacher John Smith (Christopher Walken, A View to a Kill) meets the business end of a runaway semi and winds up in a five year coma.  Awakening to a changed world, he has to adjust to a life that’s moved on from him.  His girlfriend (an underused Brooke Adams, Invasion of the Body Snatchers) has married and had a child so there’s not a lot John has to live for or look forward to even though he now possesses a powerful gift of second sight.

It’s in these first forty-five minutes that The Dead Zone really makes its mark on the audience.  There are several chilling scenes of John foreseeing danger coupled with his sadness knowing what awful things await his loved ones.  Director David Cronenberg (A Dangerous Method) isn’t afraid to take time with our introduction to the characters, only to rush through the final hour of the film with several storylines that feel like a mash-up of scripts intended for sequels.

These storylines involve John helping a local sheriff catch a rather benign serial killer, his tutoring of a young boy with a sinister father, and his crossing paths with a rising political candidate (Martin Sheen) John knows has dangerous ulterior motives.  Screenwriter Jeffrey Boam manages to overlap these threads believably but none of them wind up feeling fully thought out or adequately resolved.

Though it may not have the true horror aspects associated with King, The Dead Zone does manage to maintain its momentum, however fractured the narrative continues to become as the film progresses.  It’s not concerned with the blood and guts that make up the flashier later adaptations but wants to look more into the psyche of the characters.  For that, I find it one of the best adaptations of King’s work to date featuring fine performances and appealing production values.  Worth revisiting. 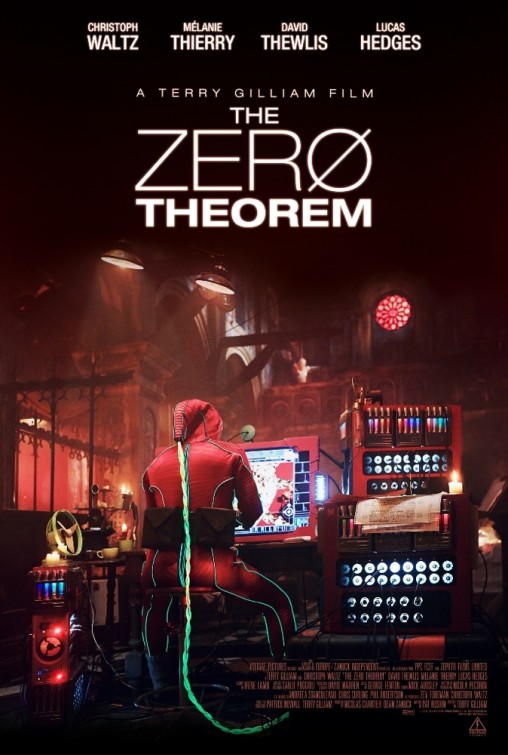 Synopsis: A computer hacker’s goal to discover the reason for human existence continually finds his work interrupted thanks to the Management; this time, they send a teenager and lusty love interest to distract him.

Thoughts: Say what you will about the deeper meaning of many of Terry Gilliam’s films but it’s hard to deny that the director doesn’t have a style that’s instantly recognizable. Even if I didn’t know that this first look at The Zero Theorem was the newest entry of Gilliam’s colorful oeuvre, I’d have come away thinking it very Brazil-esque.  Starring two time Oscar winner Christoph Waltz (Django Unchained), The Zero Theorem’s trailer isn’t one I’ll be craving to watch over and over again without an Aleve handy but I’ll keep my peepers open for the finished product.