Synopsis: A modern-day story about the boundless love between mother and child.

Thoughts: I must admit that after several years I’ve yet to fire up my audiobook of Emma Donoghue’s 2010 bestseller that explores the relationship between and mother and her child, both held captive for years inside one singular room.  Now that the film version is arriving this fall, I guess I’ll gave to get on that.  For those like myself that haven’t made it through the novel, this first teaser shows a little more than I’d expect to see in terms of spoilers but I’ve a feeling that the movie is less about the circumstances surrounding the capture and more about the interaction between the family members.  Starring Brie Larson (The Spectacular Now), William H. Macy (Jurassic Park III), and Joan Allen (The Bourne Legacy)…this one looks like a tough watch considering the subject matter. 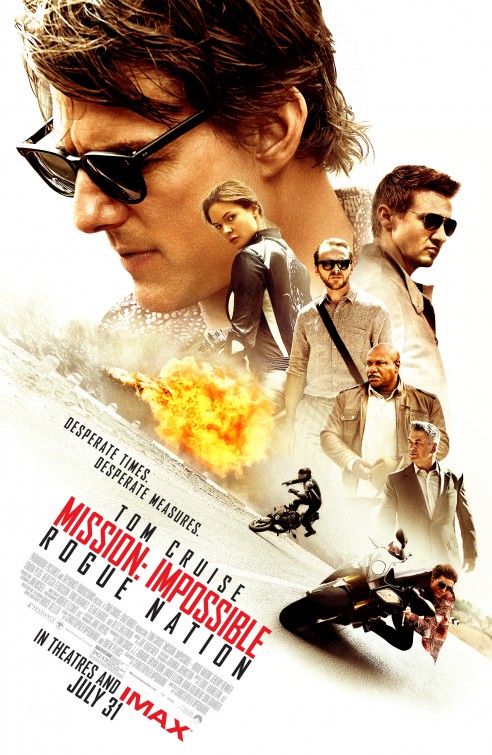 Synopsis: Ethan and team take on their most impossible mission yet, eradicating the Syndicate – an International rogue organization as highly skilled as they are, committed to destroying the IMF.

Review: If there’s one thing I’ve said time and time again in this here blog it’s that Tom Cruise knows how to deliver a spectacular action film.  Off-screen antics aside, Cruise proves with each new release that he knows how to build off of his strengths and give the audience what they came for.  Never less than 100% committed to the work (see his bold turn in the otherwise blah Rock of Ages), he’s best when he’s going the extra mile.

That being said, for this fifth installment of the TV show turned blockbuster franchise I felt that Cruise and company didn’t take as strong a step forward as they did with 2011’s Mission: Impossible – Ghost Protocol.  That film felt fresh, with a renewed interest in inventive action sequences coupled with an intriguing plot of crosses, double crosses, and triple crosses.  Cruise tried out some cool stunt work and director Brad Bird produced a nice mix of over the top action and sly spy work.

With Bird off directing Tomorrowland, Cruise brought old pal Christopher McQuarrie into M:I5 and that’s where some problems surfaced.  All four previous installments had brought Cruise together with different directors he had no prior shorthand, but this is the first time Cruise is working with a director he has history with.  McQuarrie wrote 2008’s Valkyrie and 2014’s Edge of Tomorrow for Cruise and wrote/directed the underappreciated Jack Reacher back in 2012.

So what we have is a star and a writer/director that kinda already had it all figured out before starting up production and the final effect feels like an overly safe but still better than average film that could have been great.  No matter how many of his own stunts he was reported to have performed himself, Cruise isn’t challenged much by McQuarrie to truly push the limits so the resulting movie feels slightly tentative and more in service of protecting the profitable franchise instead of doing something truly original.

Not that McQuarrie’s script is your run-of-the-mill spy tale.  Sure, there’s a lot of intrigue to go along with the spy movie checklist items but it’s more intelligent than its predecessors and aims high in covering a lot of thoughts and ideas.  Each previous Mission: Impossible film has had its share of twists and turns and this is no different, it’s a credit to the filmmakers that even when the plot points feel rehashed from similar films they still manage to be effectively entertaining.

Building off of an idea introduced in the final moments of Mission: Impossible – Ghost Protocol, Rogue Nation starts with Ethan Hunt and his IMF (Impossible Missions Force) compatriots attempting to prevent a stash of nuclear armaments from falling into the hands of the shadowy organization known as The Syndicate.  At the same time, the future of the IMF is called into question by a high ranking government official (Alec Baldwin, Aloha, doing his best impression of Alec Baldwin) and soon Hunt becomes a wanted man by The Syndicate and his own government.  Teaming with a skilled agent with a questionable allegiance (Rebecca Ferguson, Hercules), Hunt hops around the globe in search of the head of The Syndicate (rat-faced Sean Harris, Prometheus, a mostly forgettable villain).  Saying more of the serpentine plot would take up too much room here but suffice it to say that the quest isn’t easy and more than a few lies will be told along the way.

Where the film really excels is the breath-taking stunt work.  From the opening airplane sequence (already more than a little spoiled by the trailer and poster) to an underwater operation to thwart a complex security system to an edge of your seat motorcycle chase through the Moroccan desert, the film is a must-see on the biggest screen possible.  I didn’t catch it in IMAX but will seek out a screening later to really appreciate the scale of the work that went into these stunts that are more than worth the price of admission.

While Cruise may be the star of the show, Ferguson manages to swipe the film right out from under him.  Previous movies have placed the females as little more than damsels in distress (no matter if they’re trained super agents or not), but Ferguson represents a character that’s Hunt’s equal in every way.  Sure, her presence in a variety of skin baring costumes gives Cruise and audience members something to swoon over but McQuarrie wisely keeps it all business, adding to her mystery.  We never really know quite what side she’s on, so we never know what to expect when she appears onscreen,

While I’ve loved Simon Pegg’s work as a supporting cast member in Star Trek, Star Trek: Into Darkness, and two previous Mission: Impossible films, it was an unfortunate mistake to beef up his role here as Cruise’s nervous ally within IMF.  Sure, he’s a valued element of comic relief but he’s made too much of a central figure here, taking time away from Cruise, Ferguson, and the forward motion of the plot.  It’s not all Pegg’s fault, but I’m sure Jeremy Renner (Avengers: Age of Ultron) and Ving Rhames (Won’t Back Down) would have liked a little more screen time of their own.

I felt like Mission: Impossible – Ghost Protocol heralded the start of a new chapter of Ethan Hunt and the IMF and thankfully that’s continued here in Rogue Nation.  I do, however, wonder whatever happened to Paula Patton from Ghost Protocol, and Maggie Q from #3…not to mention Hunt’s wife (Michelle Monaghan, briefly seen at the end of the last film).  I kept hoping for a hint at what’s to come next but sadly the film leaves us with more questions than answers.  I’m invested enough in the series to keep accepting future Missions…but hope that the next outing feels a bit more challenging.