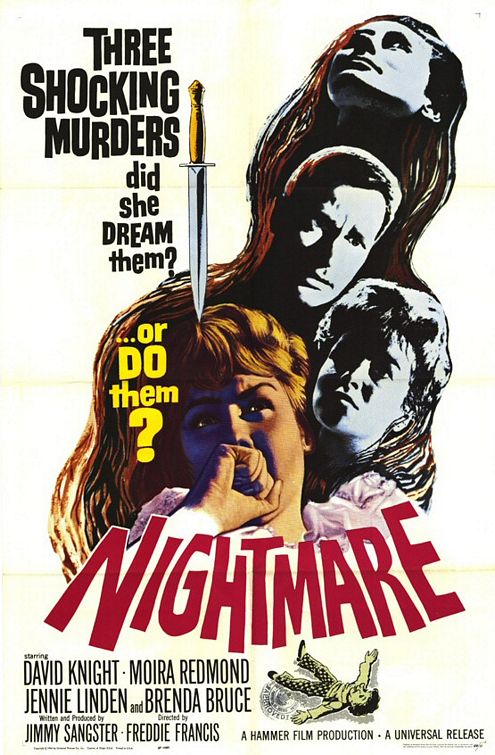 Synopsis: Janet is a young student at a private school; her nights are troubled by horrible dreams in which she sees her mother haunting her. Expelled because of her persistent nightmares, Janet is sent home where the nightmares continue.

Review: As a life-long fan of scary films and all things that go bump in the night, I frequented the horror sections of local video stores in search of something to give me the shivers.  No matter what I saw from hungry piranhas to red-coated killer dwarves, my favorites were always the vampire movies.  That dates back to the first movie I ever rented (back when you rented the movie AND the VHS player at the same time!) which was Hammer Studios production, Horror of Dracula.  An ever-so slight re-working of the classic Bram Stoker story, this Dracula re-telling had Christopher Lee and Peter Cushing in roles they would return to in the ensuing years.

I give that context because aside from Horror of Dracula and several of its sequels, I’m not as familiar with the Hammer Stuidos catalog as I should be.  Not just focused on vampires, mummies, creatures, or monsters, the studio also produced a range of thrillers where psychotic men and women were the ones to be feared.  I recently picked up an 8-film collection with an assortment of offerings from Hammer Studios and Nightmare was the first film I gave some attention to.

Directed by Oscar winning cinematographer Freddie Francis (who would film Cape Fear for Martin Scorsese late in his career) in glorious black and white, Nightmare has some twists that could be considered cliché by today’s standards but still manage to work well thanks to the overall strength of the production. Janet (Jennie Linden) is sent home from her boarding school when her night terrors become too disruptive.  Accompanied by a kindly teacher (Brenda Bruce), Janet arrives back at her stately country manse and is welcomed by her loyal chauffeur (George A. Cooper) and housekeeper (Irene Richmond).  There’s also a new nurse (Moria Redmond) sent by the family lawyer (David Knight) to keep an eye on the unstable Janet who fears she is insane just like her mother was.

A change of scenery doesn’t help things and it isn’t long before Janet begins to see a strange woman in white walking the hallways and beckoning her to follow.  When the woman turns up with a knife in her chest only to disappear again before anyone else can bear witness, the line between nightmares and reality begin to blur as Janet comes to realize she can’t trust herself or her actions.  But is she really losing her mind…or is someone helping her descend into madness?

As is typical of any Hammer production, the production design and costumes are gorgeous and the music loud and dramatic.  While there aren’t any true ‘scares’ in the picture, it’s nicely ominous with above average performances from every single actor – overall, quite enjoyable.  Those that have been around the block with these movies will be able to spot the clues that lead you to solve the mystery long before the characters do, but the ride is brisk and entertaining.