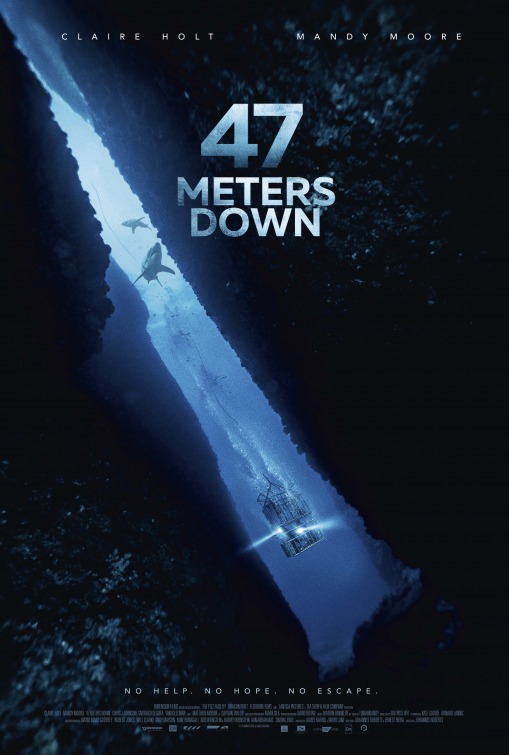 Synopsis: Two sisters vacationing in Mexico are trapped in a shark cage at the bottom of the ocean. With less than an hour of oxygen left and great white sharks circling nearby, they must fight to survive.

Review:  If there’s one thing this critic knows and loves, it’s shark movies.  Never one to shy away from a made-for-TV yarn about sand/snow/air sharks and forever true to  big screen fare like Jaws or The Shallows, I was looking forward to 47 Meters Down no matter how bad I thought it was going to be.  You couldn’t blame me for having some low expectations, though.

Originally set for release in spring of 2016 and titled In the Deep, a few copies of the DVD were sold before the film was bought by another studio and given a late summer 2017 release.  I don’t remember the last time a movie was all set for home consumption only to be pulled off the shelves to be released in theaters.  That just doesn’t happen…it’s usually the other way around. Clearly, someone at the new studio saw some potential to make more money and made the right call because while 47 Meters Down doesn’t reinvent the shark flick in any shape or form, it provides some solid entertainment and a decent amount of thrills.

Sisters Lisa (Mandy Moore) and Kate (Claire Holt) are on holiday in Mexico trying to cheer Lisa up after a bad break-up.  Lisa is the more reserved one while Kate is the risk-taker of the two (it also should be mentioned you won’t believe these two actresses are related in the slightest) so when Kate makes nice with some local boys and they float the idea of the ladies tagging along for cage diving with sharks, it takes some convincing for Lisa to get on board (literally).  At 89 minutes, the movie has to pack a lot of information into the first 20 minutes to set-up some later conflict so you’re going to have to grit your teeth until the film moves to the high seas.

When the ladies do make it onto the rusty boat with its crusty captain (Matthew Modine, doing his best to fly under the radar) it doesn’t take long for both to have second thoughts on getting into the water in a case that doesn’t look like it would survive a strong wind, much less a two ton eating machine.  The boys go first and have a jolly time, which encourages the ladies that it isn’t all that bad and safer than they imagined.  Not long into their dive the winch breaks, which sends them, yep, you guessed it, 47 meters down.  It’s a survival tale from that point on as Lisa and Kate deal with a quickly dissipating air supply and a handful of hungry great whites that begin to stalk them.

Director Johannes Roberts manages to keep this one or two levels above your standard direct to video effort.  Most of the shark effects are executed well and the underwater cinematography in general is clear and focused.  Yeah, there are some iffy moments that suggest quick reshoots on a lower budget but for the most part the movie is an impressive little nugget of fun. Performances are about average and Roberts slips in a few white-knuckle sequences and clever gotcha surprises.

Underwater horror films are a rare breed so when you find one that does its job and does it more than halfway decently it’s perfectly ok to celebrate it.  It’s success has actually sparked talk of a sequel…48 Meters Down and no, that’s not a joke. Now available (again) for home viewing, this is one you can dive into with ease.