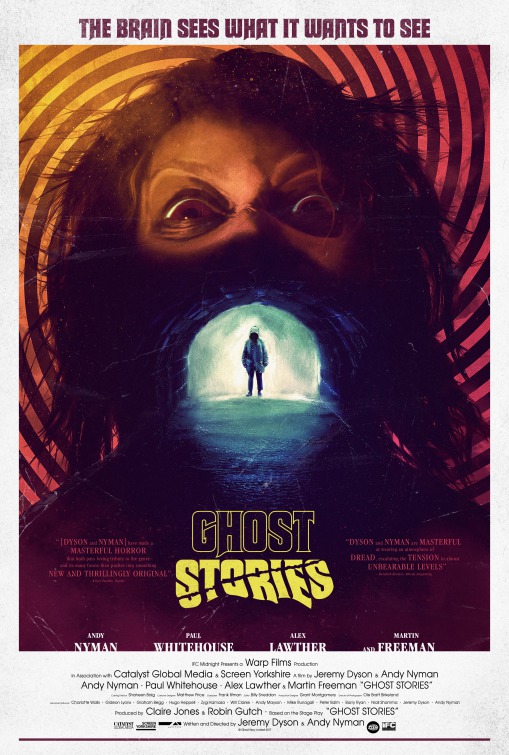 Synopsis: Skeptical professor Phillip Goodman embarks on a trip to the terrifying after being given a file with details of three unexplained cases of apparitions.

Review:  It should be clear by now that I’m a fan of anthology horror.  If you don’t believe me, take a gander at my reviews of After Midnight, Cat’s Eye, From Beyond the Grave, Tales from the Crypt, Asylum, The Willies, Tales of Halloween, and the Creepshow films.  There’s something satisfying about compact tales of terror that are to the point and, if they aren’t your cup of tea, don’t overstay their welcome.  What you often have to deal with in these omnibus films are framing devices that are hackneyed and can have little to do with the interwoven stories.  This makes the overall experience feel choppy.

Why Ghost Stories is unique, aside from the fact that it’s adapted from a stage play, is that the interstitial scenes that tie everything together actually play a part in the tales themselves.  So there’s value in paying attention to what’s going on throughout. Even when the film starts to go off the rails near the end, it remains a cleverly crafted and unique entry in the anthology genre…and one that is often quite frightening.

A TV personality known for debunking supernatural occurrences, Phillip Goodman (writer and co-director Andy Nyman, Judy) is summoned to meet one of his childhood idols, Charles Cameron.  A leading paranormal investigator in his day, Cameron is haunted by three cases he was unable to solve and asks Goodman to take a look to see if he can figure out the mystery that surrounds them.  The first case involves a night security guard (Paul Whitehouse) working at an abandoned women’s sanitarium that might not be as empty as it seems.  Next, Goodman looks into a teenager (Alex Lawther, The Imitation Game) who has a literal run in with the Devil.  Finally, we’re introduced to Mike Priddle (Martin Freeman, Black Panther) a man awaiting the birth of his child who arrives with…complications.

Each story has it’s own stable of shivers but it’s the first one set in the shuttered hospital that will really give you the chills.  With some great camera work and expert timing, Nyman and his co-director/writer Jeremy Dyson goose the audience with the right amount of scares to get the blood pressure up.  The subsequent investigations have nice moments of dread but are ultimately a bit more depressing than scary.  The outcome of Goodman’s inquiries are surprising and not exactly what you’d expect…just when you think you might know how it’s going to end (or when it’s going to end), Dyson and Nyman have another trick to unmask.  It’s not an entirely slam-dunk ending, to be honest, but it definitely wasn’t what I could have guessed at the beginning.

I can’t imagine how this was produced on stage and would have loved to see this one during its initial run in the West End where it played to great success for some time.  It subsequently toured through Europe but I’m unaware if it’s had a premiere stateside yet.  I would think it would be a special engagement show NYC audiences would get a kick out of but would take some expertise in staging regionally.  In any event, Dyson and Nyman have translated it to the screen with style and if the play is half as scary as the movie I’d bet the shrieks would be as loud as the applause.