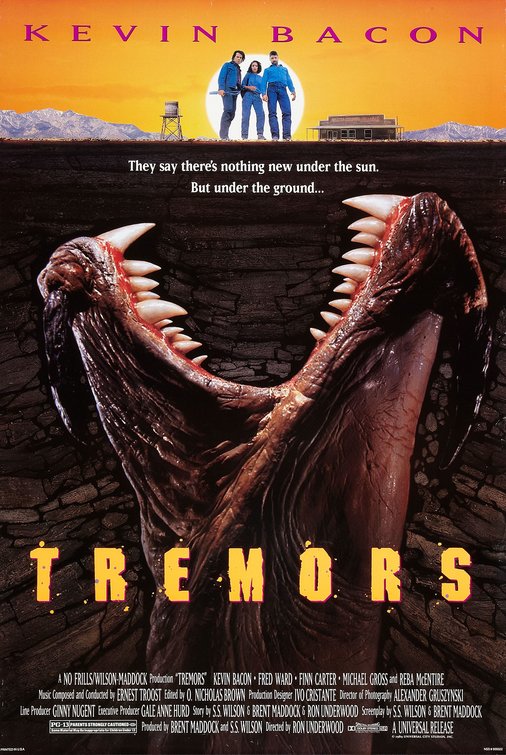 Synopsis: Natives of a small isolated town defend themselves against strange underground creatures which are killing them one by one.

Review:  I’m sadly too young to have experienced the popularity of the B monster movie craze of the ‘50s and ‘60s that kept kids entertained during the afternoons and on weekends at the drive-ins.  There were no shortages of mutated tarantulas, scorpions that came from under the earth, radioactive lizards, or other pesky beasts that preyed upon fine upstanding Americans.  Now looked back on with some degree of novelty, these movies did some serious business and often had a fun tie-ins that made the film experience unique in a way that meant you had to go see it in the theaters so you’d know what everyone was talking about.  Seeing it on TV as the midnite movie later on just wouldn’t cut it.

While I may have missed out on that piece of movie-going history, I was lucky enough to be there for a tiny resurgence in the early ‘90s when creature features came back into fashion.  Before everything became overdone with CGI and lacked that life-like sheen, practical effects provided some nifty scares for audiences, which is why these films have held up better over time than releases that came several years later.  Having actors able to battle something actually in front of them (the more realistic, the better) raised the stakes and made for the kind of memorable moments I think audiences had all those years ago.  It didn’t need to be bloody, it didn’t need to be gory…it just had to have some intelligence to it and a little creativity didn’t hurt either.

Tremors is a sterling example of how to make a B-grade monster movie that feels like an A+ effort from all involved.  It’s scary in all the right places, cleverly keeping you on your toes (literally) for a large part of its economical running time.  Better yet, screenwriters Brent Maddock and S. S. Wilson firmly establish their characters long before they’re have them eaten by an unseen creature attracted by seismic disturbances.  As an added bonus, they’ve somehow managed to make the film funny on top of everything else.  That the laughs come from character-based dialogue and not from physical humor shows how in tune the screenwriters were with the world they were creating.

Seeing no future for themselves in the dying town of Perfection, NV, handymen for hire Earl (Fred Ward, Silkwood) and Valentine (Kevin Bacon, Patriots Day) decide today is the day they are packing up and heading out of this one horse town.  If only they had left just one day sooner.  Just as they are thinking of moving on, something else has decided to move in and it’s claiming the town and the neighboring valley as its own.  The warning signs come fast.  A seismologist (Finn Carter) notices an uptick in unexplained underground disturbances around the same time Val and Earl find several dead bodies around town.  Convinced there is a killer on the loose, the townspeople gather to form a game plan only to discover what’s really hunting them…and it’s not what they expected.  Now, they have to say one step ahead of (and above) something they’ve never seen before and find a way out of their valley town that’s as isolated as it gets.

Director Ron Underwood keeps things buoyant throughout the movie, keeping his foot on the gas and easing off only slightly along the way.  The film has a strong momentum to it so it never lacks for energy or risks losing our attention.  This is partly due to Wilson and Maddock’s screenplay finding a way to keep the townspeople moving into increasingly dangerous situations that require them to strategize a way to stay off the ground from the horror trying to grab them from the ground.  The other point of success is the tremendously enjoyable performances from Bacon and Ward as the good ole boys just going about their business put into the roles of heroes to townspeople that just the day before were paying them to clean their septic tanks.  It’s also noteworthy to see Reba McIntire in her first film role as gun toting survivalist’s Michael Gross’s equally excitable wife.  Like the rest of the small cast, she understands exactly what movie she’s in and plays it pitch perfectly.

Spawning several direct to video sequels that unfortunately did start to use those dreaded CGI effects to less than stellar results as well as a short-lived television show, there’s just no matching the original Tremors. It’s endlessly rewatchable and a fine solution if you are in a group of friends wanting to watch something scary but not too scary.  There’s something for everyone in Tremors and all should come out satisfied.