So here we are, it’s Halloween!  We’ve made it through 31 days of monsters, slashers, hauntings, old classics, new favorites, and just the occasional disappointment.  Overall, it’s been a good time and I thank you for taking this ghoulish journey with me.  I wanted to leave you with not just one review but with five movies to think of this year if you can’t decide on what to watch after the trick-or-treaters have gone home or if you turned out the lights early and wanted the evening to yourself.  These are some well-tested favorites of mine and even if you have your own list of movies that are Halloween traditions keep these five scary selections in mind for the future.

Hope you had a great 31 Days to Scare! 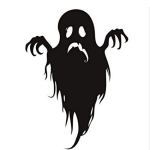 Synopsis: When the king of Halloween Town, Jack Skellington, gets bored of his job preparing for Halloween every year, he discovers Christmas Town and is inspired to take control of Christmas season for a change. Unfortunately his ghoulish subjects have difficulty getting the festive holiday quite right.

Review:  You’ve stuck with me all month so I’m going to let you in on a big secret that I’ve kept – I HATED this movie the first time I saw it.  I thought it was so slow, so stupid, and I couldn’t wait for it to be over.  Flash forward several years and I watched it again on video and wondered what the hell my problem was when I originally caught it in theaters.  This stop-motion animated film based on a poem by Tim Burton has now become a treasured favorite of mine, not just for its clever wit and gorgeous technical elements but for its beautiful music and story.  Watching Jack Skellington (voiced by Chris Sarandon but sung by Danny Elfman) grow weary with his reign as king of Halloweentown and finding pure joy when he discovers Christmastown is a delight whether you consider this a Halloween movie or a Christmas movie.  If you can’t decide, maybe split the difference and make it a Thanksgiving option… It does skew a bit older due to some intense sequences with impish kidnappers and a main villain that’s bug-infested, so it’s not for young children (hence the PG rating) but for kids not yet old enough for more adult fare (and PLEASE, let them be kids a while longer!) this is a good option.  You just might get sucked in too!  I just love this one. 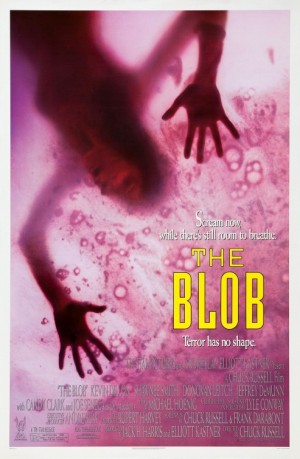 Synopsis: In a tiny California town, high school students discover a strange, gelatinous substance that melts the flesh of any living creatures in its path.

Review: You can keep the memories of 1958 original version of The Blob safely in your heart and still find immense fun with this dynamite 1988 remake.  Director Chuck Russell pivoted off the success of A Nightmare on Elm Street 3: Dream Warriors to this wonderful update about an outer space goo that lands on the outskirts of a California town and begins to feed off of any living thing it comes in contact with.  The more it eats, the bigger it gets and it proves to be an unstoppable force capable of getting in anywhere it wants…like it has a mind of its own.  Recently released in a new Collector’s Edition BluRay from Scream Factory, The Blob is often mentioned in discussions of best modern remakes and for good reason.  It moves like a locomotive and boasts some great effects…and it’s funny too!  Aside from star Kevin Dillon’s remarkable mullet, it’s aged fairly well also.  This is a good one to have in your back pocket if you have friends coming over – it’s short enough to not take up all of your night and so surprisingly entertaining that you’ll earn points for suggesting it.  A fun ride — this is a title I always wished I was old enough to have seen when it first played in theaters.

Synopsis: Ichabod Crane is sent to Sleepy Hollow to investigate the decapitations of three people, with the culprit being the legendary apparition, The Headless Horseman.

Review: So here’s another one that I eventually came around to after not loving it the first time.  With Sleepy Hollow, I think my expectations were so high that it came down to me just feeling like it wasn’t the movie I wanted it to be when actually Tim Burton gave me something much more sophisticated.  I watched this one again a year or so ago and was surprised at a) how fully immersed into the time period the movie brought audiences and b) how deliciously frightening some moments were.  Burton and his often used muse Depp were firing on all cylinders here and even if Depp’s Ichabod Crane was painted as a bit more of an outcast than an odd duck, he’s still presented as a sympathetic lead audiences could relate to.  Burton hadn’t fully given himself over to being so CGI heavy and while there are large portions of the movie relying on computer effects an equal amount is practical as well.  Add to that some fun supporting performances by a stable of faces familiar to old school horror fans as well as a whodunit mystery element that diverged from Washington Irving’s original story and you have something that feels fresh.  A good date night scary movie thanks to some nice jolts, a decent amount of blood, and a quirky Gothic romance between Depp and co-star Christina Ricci.

Synopsis: A family heads to an isolated hotel for the winter where a sinister presence influences the father into violence, while his psychic son sees horrific forebodings from both past and future.

Review: You don’t have to use the November 8 release of Doctor Sleep, the Stephen King-penned sequel to his 1977 novel The Shining as an excuse to revisit Stanley Kubrick’s 1980 adaptation.  This is one movie that works any time of year but add in that extra layer of Halloween atmosphere and the tale of a man driven insane while serving as a imposing hotel’s winter caretaker and you have a doozy of a scare fest.  Kubrick infamously made alterations to the novel that King didn’t approve of but audiences haven’t seemed to care much over the years, routinely naming The Shining one of the all-time great horror films.  It’s extended running time requests your full attention and Jack Nicholson’s lead performance demands it – that indelible image of his crazed face pressed against a door as he tries to get to his unraveling wife (poor Shelley Duvall who really suffered making this film) and troubled son (a grating Danny Lloyd) is burned into many a memory.  The supernatural elements of the movie are handled by Kubrick with a mix of reality and fantasy, blurring the lines constantly so we’re as off-kilter as Nicholson is by the time he fully loses it.  It’s a completely unforgettable film that I’ve come to appreciate more the older I get.  Those wanting to do an even deeper dive into the mythology behind the movie should check out the documentary Room 237.

Synopsis: A group of women organize a trip into a large cave. After descending underground, the women find strange paintings and evidence of an earlier expedition, then learn they are not alone.

Review: For the strong-willed among you, The Descent is a great option to test your mettle.  It’s one of the best horror films to come out in the last few decades and remains one of the single most frightening movies I’ve seen.  I remember watching this in theaters and at one point wondering who just yelped so loudly…only to realize it was me.  I spent most of the running time either holding my breath or gripping my armrest, a relaxing experience this most definitely was not.  It was an incredibly satisfying one though, from a horror fan angle, because it delivered a nearly flawless presentation of a bad dream that turns into an all-out nightmare.  Opening with a bang before letting the audience get a breather for about 20 minutes, the action picks up again when friends get trapped in an underground cave and find out far too late they have more to worry about than finding another exit.  Who or what is down there with them is fingers-over-the-eyes scary and director Neil Marshall is unrelenting in the vice grip he puts on the audience.  Fighting for survival and with matters complicated by personal demons surfacing, the women are intelligent but not above pushing each other buttons when stressed.  This is horror at its most primal, consistently going for the ultimate nerve-shredding scare/visual and Marshall doesn’t make a wrong step.  The ending, usually a sticking point in horror movies, is handled well and I can say the movie got a better than average sequel without it spoiling anything for you.  If you can handle it, take a journey with The Descent.  One of the very few movies that can be called a modern classic and have it mean something.