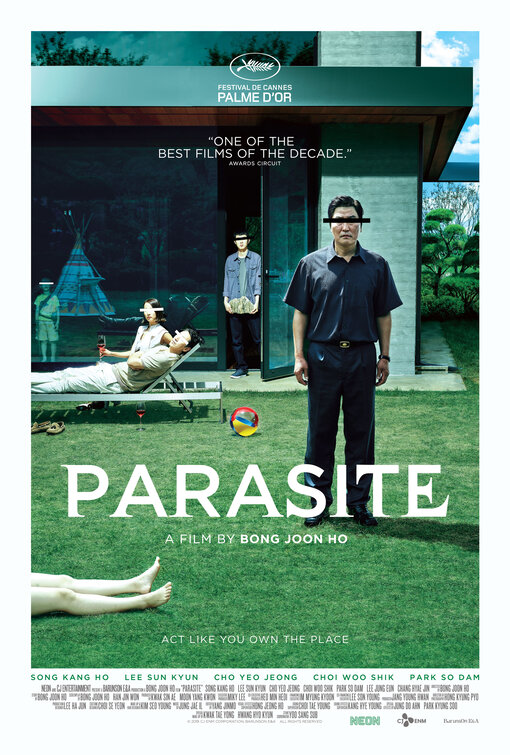 Synopsis: All unemployed, Ki-taek’s family takes peculiar interest in the wealthy and glamorous Parks for their livelihood until they get entangled in an unexpected incident.

Review: We’re at the point of the yearly movie cycle when you’re going to be bombarded with a lot of pull quotes that proclaim every movie to be the “best” thing you’ll see featuring the “greatest” performances and the most “revolutionary” filmmaking and frankly, they can’t all be winners.  Each studio hopes to hang their hat on at least one movie that will generate the good buzz that can carry their film, or even key players in their film, through to the awards season that is advancing at us at a rapid rate.  Audiences can look forward to new work from old masters as well as sophomore films from festival darlings that will surely garner the popular vote and net some admirable box office returns.  Yet there’s one film that’s bulldozing them all…and it isn’t doing it quietly.

Since premiering at the Cannes Film Festival in May and winning the prestigious top prize by a unanimous vote (a rare feat), the Korean film Parasite has been knocking the socks off critics as it gears up to a tiered release around the country.  After Cannes, it continued to play well at subsequent festivals and its entire opening weekend in NYC sold out before the first showing.  Early reviews touted the film as the new surprise front runner for Best Picture and its slick trailer enticed the viewer without giving too much of the plot away.  The hype machine on this one was gassed up and ready to go without going into overdrive…but could it possibly live up to all that advance praise?

I’ve been to this rodeo before where I’ve heard nothing but cheers for a film only to finally see it and not get what all the fuss was about.  The same thing happens when general audiences see the movie as well and the box office reflects it too when a film that scored a bunch of awards at a supposed award precursor is finally released and flattened by less than enthused mainstream media and viewers.  While I was excited to see Parasite and thrilled my city was on the list to be in the first wave of release, I took my seat with more trepidation than usual because this was one I truly wanted to meet the expectation I had for it.  It didn’t meet my expectations…it exceeded it.  And then some.

Director Bong Joon Ho’s Parasite is such a tight knot of a film that I feel as if I have to be careful with what I say for fear I’ll somehow assist in unraveling it.  There is so much surprise to be had in the performances and so many unexpected turns in the plot that there’s no way you can say at the beginning you’ll know where the movie will wind up by the time the credits roll.  There’s just no possible way you could do it.  It takes a true master storyteller to weave this kind of complex tale of social commentary and still manage to make it a lively, nail-biting, funny, incredibly entertaining piece of cinema.

Living in a run-down sub-basement apartment and taking odd jobs to make ends meet, Kim Ki-taek (Kang-ho Song) and his wife Chung-sook (Hye-jin Jang) have raised their son Ki-woo (Woo-sik Choi) and daughter Ki-jung (So-dam Park) to make the most out of any opportune moment.  When Ki-woo’s friend turns up and says he’s leaving to study overseas, he offers Ki-woo the chance to take over his job as an English tutor for the daughter of a rich family.  When Ki-woo arrives at the pristine mansion of the Park family, he’s instantly taken by their deluxe lifestyle and the relative naiveté of Mrs. Park (Park Yeon-kyo) who he soon begins to manipulate.

With the rest of his family looking for work and possessing a knack for filling a certain gap that exists (whether it already it exists or is cleverly manufactured), it isn’t long before Ki-woo’s parents and sister are employed at the Park villa and that’s when the lines between the haves and have-nots become disturbingly blurred.  As Ki-woo continues to teach the daughter and his sister becomes an art instructor for the son, Ki-taek takes over chauffeur duties for Mr. Park who is your typically detached husband.  It’s an easy family to insinuate themselves into.  While the Kim’s aren’t necessarily bad people, they are extreme opportunists who seize upon every advantage presented to them, whether it will ultimately provide value to them or not.  Only realizing the consequences later, the Kim’s abandon any measure of caution as they are swept away by the allure of the Park’s lavish lifestyle. Right about the time you think you see where the Kim’s might be heading, a doorbell rings and changes everything.

What I so enjoyed while watching Parasite was a genuine feeling that anything could happen.  Around every corner was the unknown and down each staircase was a new twist waiting to be discovered – I can’t remember the last time a movie held such interest for so long.  In the past, writer/director Bong Joon Ho has delivered some impressively detailed films with a strong familial core like Snowpiercer, Okja, The Host, and Mother (not the awful Jennifer Lawrence movie) and he’s focused his eye once again on a family that has a lot going on under the surface.  As the head of the family wanting to provide for his wife and children, Kang-ho Song is wonderful trying to navigate keeping up appearances not only with the ruse he’s pulling on the Park’s but in saving face in front of his loved ones.  I also found Jeong-eun Lee to be dynamite in a tricky role playing the Park’s first housekeeper, a genial if all business woman that learns too late not to underestimate the new hires the lady of the house has taken on.  The entire film is well cast, down to the Park children who are just the right amount of cluelessly spoiled.

Shepherding the first Korean film to win the Palme d’Or at Cannes is a high honor and well-earned bragging rights for director Bong Joon Ho but the commercial success of Parasite will be the truest test of all.  I can see good word of mouth elevating this one, and with good reason.  For once, the preview hasn’t ruined any of the surprises or given any more clues than I have at what may be going on in the latter half of the movie.  Subtitled films are a tough-sell for audiences that like their movies loud and with impressive special effects but this is one that would be wholly enjoyed with a full theater.  That way, you can all share in the experience of discovery at the same time – and what a find this excellent film is.  Don’t miss it.