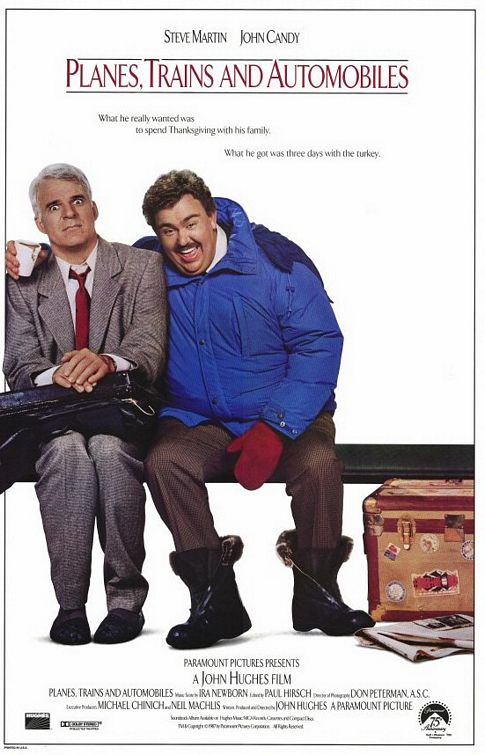 Synopsis: A man must struggle to travel home for Thanksgiving with an obnoxious slob of a shower ring salesman his only companion.

Review: Here’s a movie I’m really, truly thankful for.  30 years (!!!) after its original release, Planes, Trains and Automobiles is a gift that has kept on giving to countless people throughout the year but especially at Thanksgiving.  Writing this review in 2017 as I’m about to hit the road to celebrate the holiday with family, I knew I had to get my annual viewing of this one in a day before the big Turkey Day. Revisiting this one is like meeting up with an old friend who tells the same jokes but still delivers them with a master’s precision.

It’s two days before Thanksgiving and marketing exec Neal Page (Steven Martin, Parenthood) is rushing to catch an early flight home to Chicago to be with his family for the holiday.  If only he could make it to the airport.  In mid-day NYC rush hour traffic, he races for a cab with another big shot (Kevin Bacon in a cameo done as a favor to John Hughes right before they made She’s Having a Baby together), gets his cab stolen out from under him by an unseen man toting a large trunk with him, and arrives at the terminal to find his flight delayed.  That’s where he meets Del Griffith (John Candy, Splash), a portly shower ring salesman that turns out to be the cab thief.  When their plane is diverted to Kansas on account of the weather, Neal and Del become unlikely travel mates as they work together to get back to their families.

Hughes was on a real roll at this point, having just come off of directing back to back to back to back hits that have become seminal favorites (Sixteen Candles, The Breakfast Club, Weird Science, Ferris Bueller’s Day Off) not to mention writing National Lampoon’s Vacation, Pretty in Pink, and Some Kind of Wonderful.  This was his first movie to deal with real adults and it’s a marvelous pairing of a perfectly assembled cast with Hughes’ hilarious (if episodic) script.  There’s not a single boring moment in the movie, pretty remarkable considering how hard it is to sustain comedy for any length of time, let alone 92 minutes.

The movie is filled with classic scenes.  Martin and Candy waking up in their small hotel bed in an awkward embrace, Martin’s hysterically foul-mouthed run-in with a car rental agent (Edie McClurg, Elvira, Mistress of the Dark), Candy driving cross-country and accidentally getting both of his arms stuck behind him while Martin sleeps, the list goes on.  Hughes is smart enough to have Del be the catalyst for a joke but not make him the ultimate target, to do that would be too cruel to be funny and that’s not what he’s interested in.

Martin is great as the tightly wound Neal who alternates between hating the schlubby Del and hating himself for the way he treats him.  It’s not hard to see why Neal gets so frustrated, either, because Del does himself no favors.  He’s a slob, he takes all the air out of any room he’s in, he doesn’t recognize normal social signals, and he has an uncanny way of destroying anything he touches.  Still, in Candy’s brilliant hands he’s a lovable dude and by the time the movie reaches its surprisingly emotional zenith, you’ll probably be like me and wiping tears away.  Oh yeah, I cry every time I watch the movie…I know I will and have accepted it at this point.

On a personal note, I can’t watch this movie without remembering my late father’s howling laugh when I first saw it.  I can still hear him roaring at Candy’s cluelessness and Martin’s slow-burn reactions.  This was a family favorite of ours and while my dad isn’t here to watch it with me, I think of him constantly when I put it on.  I watch a lot of movies and don’t always take the time to go back and rewatch many films…but there are exceptions and Planes, Trains and Automobiles is certainly one of them.