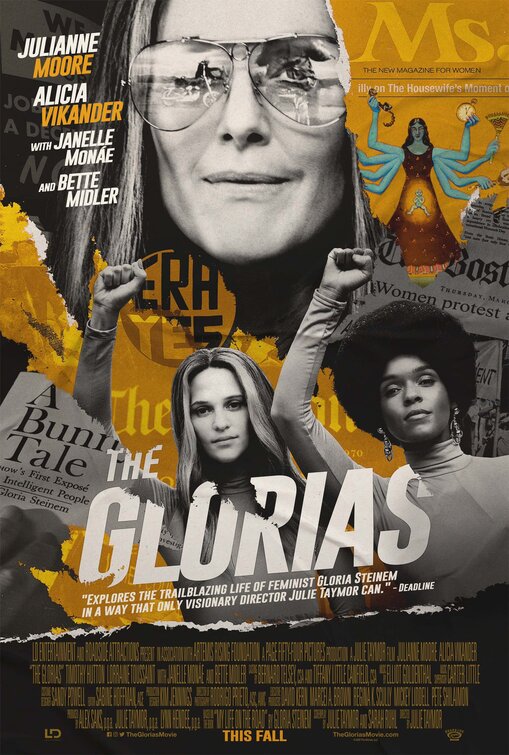 Synopsis: The story of feminist icon Gloria Steinem’s itinerant childhood’s influence on her life as a writer, activist and organizer for women’s rights worldwide.

Review:  One thing 2020 has definitely needed is more empowerment.  We’ve gone through this year feeling like we’re just behind in a lot of ways, from our health to our control over what happens within our government, even to what goes on in the neighborhoods we want everyone to feel safe in.  No one wants to be at odds with each other (at least I don’t think the majority of us do) and it becomes draining to watch news reports on the great division that appears to be widening between numerous groups that used to be able to find common ground.  The rise of social media and the ability for those that hid in the shadows to now speak their hateful rhetoric from the comfort of their anonymity has only added fuel to that and the spiral just continues downward.

That’s why in some small way a biopic like The Glorias feels like a welcome bit of relief right about now, even though it too focuses on an upward battle for acceptance and understanding in the face of adversity.  While a number of documentaries have been made and work has been written about the activist Gloria Steinem over the years and just in the last decade alone, this is the one that has sprung from her own words and is based on her 2015 autobiography My Life on the Road, written when she was 81.  Adapted by celebrated playwright Sarah Ruhl, directed by lauded auteur Julie Taymor, and starring two Oscar winning actresses sharing the role of Steinem at various points in her adult life, on paper The Glorias feels like a project that sounds like an ideal convergence of the right people.  Why, then, does it wind up feeling like a artistically curated Cliff Notes version of a colorful life, only finding some true resonance with its audience in its final half hour?

I honestly doubt a life as large and full as Steinem’s could ever be fully captured in a feature film and to whittle down eight decades into 140-some minutes does seem like a Herculean task, but Ruhl does her best by not taking the traditional biopic route.  This is not a straight-timeline kind of film, but rather one that seems to go from one memory to another, at least at first.  That may be frustrating for audiences that are used to seeing where someone began and watching their life unfold until they wind up in the present (or their version of the present if it’s a person that’s no longer with us) and discover what they learn along the way.  Here, Ruhl and Taymor make use out of the multiple Glorias (Becky’s Lulu Wilson and IT: Chapter Two’s Ryan Kiera Armstrong’s play younger Glorias) to replace others seemingly at will as a way of commenting on what is to come in her life or in service of reflection on her past.  It’s cinematic trickery that works some of the time, mostly when Julianne Moore (Still Alice) as the eldest Gloria subs in for one of her younger counterparts who may not have found her authoritative voice yet but it gets a little showy if a smaller one takes over for an adult.

This narrative alignments also makes it harder to review The Glorias in such a straightforward way.  Taymor and Ruhl jump around through different periods of Steinem’s life with such apparent abandon that it’s a bit of a whirlwind.  One moment we’re with the youngest Gloria (Armstrong) as she dances with her huckster father (a stalwart Timothy Hutton, Ordinary People) on the music hall pier he owns before he packs up the family and hits the road in search of another easy money opportunity.  The next thing we know, Taymor has us with ¾ Gloria (Vikander, The Danish Girl) on her travels through India or her early journalist days where she goes undercover working at the Playboy club.  Then we’re back to teenage Gloria (Wilson) caring for her bedridden mother (an excellent Enid Graham) before meeting the Gloria in full bloom Gloria (Moore) as she comes into her own as an activist fighting for the ratification of the ERA, forms Ms. magazine, and in her later years develops a friendship with Wilma Mankiller (Kimberly Guerrero, A Wrinkle in Time), the first woman elected to serve as Principal Chief of the Cherokee Nation.

What I found the most interesting in The Glorias was not the typical biographical data that makes up the usual films of this type.  Steinem’s upbringing, dealing with a dreamer Father that lived in the clouds and a Mother who toiled away making up for his frivolity, doesn’t feel so dissimilar than many that would go on to champion the rights of women who served unnoticed for so long.  Though Steinem had a number of relationships over the years (and was questioned often about them in interviews), the film bypasses any of these tangents in favor of exploring her friendships with other women, including feminist Dorothy Pitman Hughes (Janelle Monáe, Harriet), U.S. Representative and a leader of the Women’s Movement Bella Abzug (Bette Midler, Hocus Pocus), and civil rights activist Flo Kennedy (Lorraine Toussaint, Scary Stories to Tell in the Dark).  Those that watched the FX series Mrs. America earlier this summer may be surprised to see how little the ratification of the ERA fits into the film, it’s almost a good thing to have watched that nine-episode series because it gave more context to conversations between Gloria and Bella that those who aren’t as familiar with the movement might feel a bit at sea in.

As she does with all of her projects, Taymor brings a keen eye to The Glorias but occasionally lets her artsy side get the best of her.  This is never more obvious than a misguided sequence where Moore’s Gloria steps in to respond to an interview question on live television and sends the studio into a Wizard of Oz-ish tornado that’s not entirely rendered with the same style or polish as other flights of fancy.  Another animation of the Hindu goddess Kali that becomes the first cover of Ms. magazine feels awkward and a tad childish in the context of what has been a more maturely delivered movie until that point.  Taymor’s blending of dreamy fantasy works best when its done subtly, like when the camera that’s focused on one Gloria will pan back to show another iteration of Steinem gently resting her head on the shoulder of her younger self.  It’s brief specialties like these that Taymor is so adept at that The Glorias needs more of throughout.

Even as it races through the decades, it’s when The Glorias finally slows down a bit in Steinem’s later years that Taymor and Ruhl strike something special.  Moore ages forward and with the help of believable prosthetics manages to look remarkably like Steinem without becoming a grotesquerie of plastics in the process.  These quieter later scenes of The Glorias make up for the frenetic earlier part of the movie and lead to a final transition that I should have seen coming a mile away but didn’t.  When it happens, you suddenly realize that Taymor and Ruhl have done what they set out to do and connect Steinem’s past to our present with a graceful sincerity.  Essentially, they hand the film back to their subject as a way of communicating “If this is what Gloria Steinem’s legacy is to be, then let the final word on the matter be hers.”  And, simply, it is.