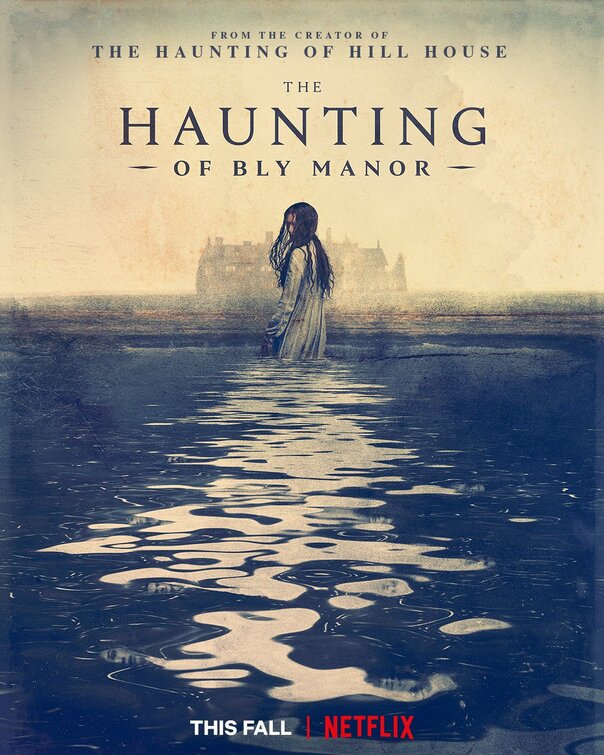 Synopsis: After an au pair’s tragic death, Henry Wingrave hires a young American nanny to care for his orphaned niece and nephew who reside at Bly Manor. But all is not as it seems at the manor, and centuries of dark secrets of love and loss are waiting to be unearthed because at Bly Manor, dead doesn’t mean gone.

Review: In 2018, Netflix debuted writer/director Mike Flanagan’s clever reworking of Shirley Jackson’s classic novel The Haunting of Hill House and it became the type of buzzed about show every streaming service dreams of.  Viewers posted about its spine-tingling scares, marveled at its creativity in taking Jackson’s novel concerning a spooky haunted house and turning it into a family drama masquerading as a horror series, and began dissecting the intricate ways Flanagan (who directed each episode and had at least some part their conception) had made it all fit together.  More than anything, everyone wanted more.  The trouble was, the story had been told and Flanagan was a smart enough filmmaker to know that returning to make a continuation would be a disaster.

Instead, the pitch to Netflix was to step back and see this as an opportunity for each season to be an entirely new “Haunting of” and so Flanagan the producer was given the green light (and lots of green, I’m sure) to explore a new set of spirits.  Here we are, two years after Hill House closed its doors and we’re standing at the front steps of The Haunting of Bly Manor which has arrived just in time for a chilly October welcome.  Taking inspiration from the works of Henry James (and not just the author’s celebrated and oft-filmed “The Turn of the Screw as you may have originally thought) Flanagan’s involvement in the second season is limited to directing the first episode.  As was the original intent on Hill House, Flanagan then hands the reins of the remaining episodes to four different directors and one directing duo.  This creates an unavoidable discord from episode to episode, which unfortunately holds Bly Manor back from reaching the same level as its previous season.

By this point, I’ve seen enough of the work Flanagan has done (Oculus, Doctor Sleep, Gerald’s Game) to spot his style so the season opener starts strong out of the gate.  A framing device reveals a narrator I was greatly excited to see, but I’ve been asked not to reveal who it is.  Though we see them briefly on screen in the first and final episodes that take place in 2007, their main contribution comes from a voiceover that gives a storytelling structure to the episodes.  They take us back to 1987 in London when American Dani (Victoria Pedretti, Once Upon a Time… In Hollywood) is hired for an au pair position with barrister Henry Wingrave (Henry Thomas, Fire in the Sky) to care for his niece and nephew at Bly Manor, their home in the English countryside.  Dani seeks solace away from the busy city and a glowing eyed figure that haunts her reflection and hopes Bly Manor will be a good change of pace.

Arriving at the well-kept estate, she meets the other staff.  Gardner Jamie (Amelia Eve), Cook Owen (Rahul Kohli) and housekeeper Hannah (T’Nia Miller) are all welcoming in their own way and instantly take a liking to the way she is able to communicate with the children.  Flora (Amelie Bea Smith) and Miles (Benjamin Evan Ainsworth) appear to be well-adjusted considering they’ve lost their parents and a previous caregiver in short order and under tragic circumstances but need Dani’s attention and even her discipline to remain that way.  They do have their own peculiarities though.  Flora’s dollhouse is a small scale replica of Bly Manor and is filled with crude dolls that bear an off-putting resemblance to members of the staff…and others.  The dolls seem to have a way of turning up in strange places and Flora is particular about who touches them and where they should stay at night.  Keeping Dani off balance becomes a game for Miles who appears to be bold with his actions one moment and less assured the next.

Over the episodes we come to learn more about Dani and what led to her leaving her home in the US and the secret she’s trying to hide from at Bly Manor.  Then there’s Wingrave’s former assistant Peter Quint (Oliver Jackson-Cohen, The Invisible Man) who was thought to have disappeared with a hefty sum of embezzled money but may have returned to the grounds for another sinister score.  We’ll also find out the full story about the children’s previous nanny (Tahirah Sharif) and how her time in the manor led to a destructive path.  More secrets are scattered throughout that I either won’t or can’t spoil for you at this time, but the fun in the show is gathering all the mysteries that Flanagan and his writers introduced and then waiting for the solutions to arrive.

The trouble with Bly Manor is, I think, that there are too many episodes.  Where Hill House made good use of its 10-episode arc, Bly Manor can’t exactly justify the nine full length chapters, many of which are excessively talky and meditative.  Audiences coming expecting another Hill House are bound to be disappointed with Bly Manor’s more arid setting and less intimate feel.  The writing also doesn’t feel as carefully crafted here and that’s a major problem for me.  You could tell that the script for Hill House was delivered nearly complete but I kept getting the impression Bly Manor began filming before the scripts for later episodes were done and that’s on account of those final episodes struggling without much plot mechanics to work with.  Hill House was such a thrill because it was solving its own mystery as it went along without you even realizing it…so that in the final episode it sort of went “Ta-Da!” and you suddenly realized what it had accomplished right under your nose.  In Bly Manor, the answers arrive without the same satisfaction.

Perhaps it’s because I didn’t warm to these characters in the same way I linked up with the family at the heart of Hill House.  Watching that show again in the days before taking on Bly Manor, I was struck not by how well it holds up on a second viewing (which it most definitely does) but how deeply emotional it is more than anything.  Though she’s playing another tortured soul, Pedretti manages to transform into a totally different person which is a complete 180 from the gentle Nell in Hill House. Aside from Miller’s uniformly excellent performance as the manor’s kindly housekeeper and, to a slightly lesser extent, Kohli’s cook working at Bly Manor while harboring dreams of opening his own restaurant, much of the cast stalls out when saddled with some of the expositional dialogue that starts to infiltrate the back episodes. when a lot of ground needs to be covered in short order.

Here’s the good news, though.  Forget about the long-winded speeches the writers start to favor near the end of the season.  Try to ignore the eyebrow raising accents from Americans going full community theater with their “veddy Breetish” patterns of speech. Pay no attention to the fact there’s a disappointing lack of ingenuity in the camera-work or hidden Easter eggs like last season which make future viewings more fun.  No, what you need to know is that with all the nitpicks I’ve picked at, I still think Bly Manor is well worth a visit.  One episode is downright great (sadly…or smartly, Netflix already asked me not to tell you which one) and there’s another focused on Miller that’s a definite highlight.  There are far too many shows that prove popular that don’t spend half the time this show does on how things fit together.  The production design is gorgeous, the ‘80s styles are chic but not gaudy or intrusive, and while I didn’t love the finale as much as I in particular should have, it’s a brave way to end things with a look toward a possible third residence to haunt.