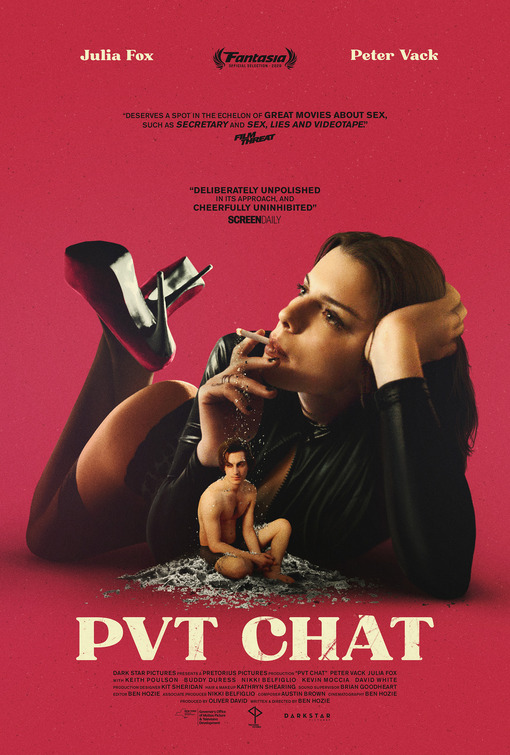 Synopsis: An internet gambler living in NYC becomes fixated on a cam girl from San Francisco. His obsession reaches a boiling point when fantasy materializes in reality on a rainy Chinatown street.

Review: When you hear the term “sad movie” you almost instantly think of the kind of film where someone is valiantly battling an incurable disease while their bereft family and friends look on with glistening eyes.  These predictable weepies have the desired effect (on you and me, let’s be clear) and tear-jerkers like Steel Magnolias or Terms of Endearment might wring the sobs from your lungs but even they manage to leave you with a bit of a smile.  All is not ever completely lost, even in the darkest of sad endings.  On the other side of the Kleenex box are the films that can send us into a kind of funk that can ruin a day.  These are movies like Requiem for a Dream, with so blistering in their outlook that all that will break their moody curse is the anti-venom of the sunniest comedy you can find or the sprightliest Disney film you can withstand.  You need your medicine, and you need it fast or else the blackness left by the filmmakers could overwhelm you.  It really can be that awful when the movie has hit the most sensitive of buttons on your psyche.

While I wouldn’t call PVT CHAT, a grungy bit of gack of a film, depressing, it’s definitely one of the saddest movies I’ve experienced in a long time.  The characters are sad, the look of the movie is sad, even the usually vibrant New York City streets look like they’re aching to go unnoticed in writer/director Ben Hozie’s uggo film that wants to be edgy but winds up feeling like an exercise in boundary pushing.  Aside from it being shot like a grotesque underground snuff film much of the time, it skates by with the thinnest of plots.  Undoubtedly aiming to lure audiences in with the promise of its explicit nudity, it achieves its goal of making you so uncomfortable that you want to look away but doesn’t have any worthy filler content in between the exposed genitals that make it compelling viewing.

You’ll know right away if PVT CHAT is for you as Hozie opens on Jack (Peter Vack) having a, uh, intimate moment with himself while conversing through his laptop with internet cam girl Scarlet (Julia Fox) who belittles him, wants to put a cigarette out on his tongue, and in general gives him the dominating treatment he is paying for. The scene is graphic and startling, but it quickly accomplishes an introduction of sorts to the characters that sit at the center of an increasingly banal screenplay involving losers, scams, artists, loser-artists, scam-artists, and losers that scam through cam…though not always in ways that are immediately clear.

About to be kicked out of his comfortable apartment after his roommate dies, Jack’s job apparently is playing poker online, but it obviously isn’t making him enough cash to pay his rent.  Or it could be he’s spending it all on sessions with Scarlet, a San Francisco-based dominatrix that becomes his obsession, mostly because she’s open to doing more than get down to business and talks to him like a person rather than a dollar sign.  Wanting to impress her, he lies about his profession and pretends to be a tech wiz creating a ludicrous new way of communicating (I won’t even say the name here, but it rivals the equally snort-inducing “Brain Box” from Bliss) and whether she truly buys it or not isn’t the point, she’s just that good at pretending she does.

The point is actually this.  He’s a loser but doesn’t know it and after seeing her paintings and getting a peek at her life when the cameras are turned off we get the impression she might be an actual winner…so the longer the two talk and after its revealed they really share the same zip code, you root for her to unplug her connection to Jack and find a new way to fund her dreams.  Yet Hozie keeps PVT CHAT going for longer than that, subjecting Scarlet (and Fox) to more lurid objectification and the audience to drab plot machinations and pointless scenes like an art show where bread is the main ingredient, and a voice keeps that repeating “Mic Check!” on a loop.  All meant to show that Jack is willing to push aside what little he does have in the way of friends and prospects for a woman he only thinks he knows.

Hozie floats some sort of business around a money scheme between Jack and a house painter hoping to send his kid to college but it’s all too much for a barely 90-minute movie to support and still give proper time to its leads.  Some credit has to go to Vack and Fox for really laying it all out there and not merely taking off their clothes but…going there.  To everyone complaining that only women are asked to do questionable things onscreen…Vack’s appearance in PVT CHAT seems to be a rebuttal to that.  He holds nothing back (while holding one important thing) and that he does it in front of Fox speaks to the level of trust the two actors must have had in each other but the director.  Making a big splash last year in Uncut Gems, Fox doesn’t quite score the same points again because she’s more of a pawn than a player, but you can absolutely see the potential for more if given a role that isn’t built around her appearance.  The best scenes in the movie are when the camera is on her face, catching a reaction shot to one of her “real life” interactions with people she knows.  It’s a tough break that these actors are pretty terrible, and the camera set-up often looks like the actors are holding it in their laps, but that her spark shines through all that is something to take serious note of.

Never one to be embarrassed by flesh on film or taboo subjects, I was still really put off PVT CHAT and I had to ask myself often if it was the explicit nature of the material/visuals that I was having such a problem with or if it was something else.  For me, it wound up being that the rest of the movie was so grimy, creaky and unresolved in several areas that these extremely graphic sequences felt undeserved and, therefore, made me as an audience member uncomfortable.  It truly feels sleazy, like something we shouldn’t be watching…and I don’t think you should even bother.