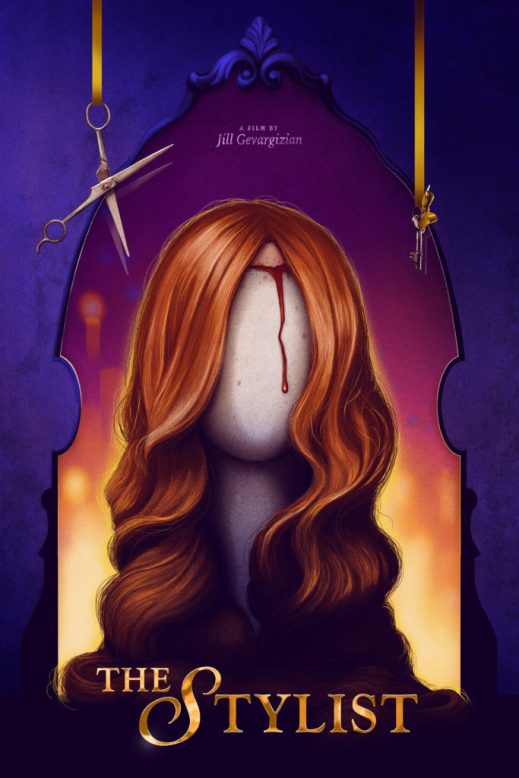 Synopsis: A lonely hair stylist becomes obsessed with the lives of her clients and descends into murderous madness.

Review:  Over the past year, I’ve made peace with something I knew was coming.  It had been foretold by my grandfathers, my dad, and several other male relatives.  The warning signs started to show up after college but slowed down as I entered my post-graduate years so I thought maybe, just maybe, I was going to skate by as the rare family member that would avoid the inevitable.  Yet, as I neared forty the writing was on the wall.  Understanding that I was working with a fixed amount of time, I lived it up while I could, but the time spent indoors throughout the past year only forced me to face it.  My hairline was receding and joining the half crescent moon of fine thinning whisps at the back of my head.  Never being someone that was going to do a comb over or hide this in any way, I finally sat down in a chair and told my partner, “Buzz it”…and buzz it he did.  RIP my hair but what a freeing moment it was.

One of the things I’ll miss most about the detailed haircare regimen beyond a simple wash and go now is the chance to catch-up with my barber/stylist.  It was always an important decision on who you’d entrust to make life-altering decisions on your ‘do and trust me, “It’ll grow back” doesn’t mean much when you’re staring at yourself in the mirror looking like you paid someone to give you the same cut you’d have given yourself at age 6.  These relationships you form with the person that handles your hair can be surface level if you go to a drop-in location but might be deeper if you’ve seen them forever or if they happen to be your friend outside of the professional service they provide (I’ve had both.).  Often (such as in films like Steel Magnolias), stylists can be portrayed as who you go to for gossip first or even more one-dimensional in other projects, but do you ever stop to think about their lives after they’ve swept up, turned out the lights, and gone home?

That’s the question that seems to be on the minds of the filmmakers behind The Stylist, at least as a jumping off point.  Co-writer/director Jill Gevargizian then takes what could have been your basic indie exploration of the life of a lonely hairdresser that longs to be liked/loved and gives it a gruesome edge, successfully braiding the horror and drama together in interesting ways.  It’s going to give audiences well-versed in the horror genre rather loud echoes of 1980’s grotesque cult classic Maniac, but don’t let that sway you into thinking it’s a copy of that troubling film.  The Stylist has its own methodical plan of attack which it takes remarkably seriously.

A traveling saleswoman is unassuming hairdresser Claire’s last client of the day.  Claire (Najarra Townsend) goes through the opening motions of asking what the client wants and gets her something to drink.  She also covers the windows and locks the front door while the woman blithely flips through a magazine, eventually surprisingly even herself as she opens up to Claire about some extremely personal information.  Because, she reasons, that’s what paying customers do with stylists: open up their lives to them knowing they aren’t an important figure in their lives or the lives of anyone in their personal bubble so what could it hurt?  What ends up happening to the woman is left for you to find out, but it does get what I’d reckon is the film’s most squirmy hurdle out of the way.

Yes, it appears that Claire might have a little problem with keeping a line of regular customers because she can’t help but murder them and keep a souvenir to remember them by.  Keeping her mementos in the basement of her modest home, she seems to use them as a comfort and/or coping mechanism for a particular grief or trauma in her life because the soothing they bring quickly turns to painful awareness of what’s she done.  This is someone that eventually has full realization of her crimes but can’t help herself in the moment…and that’s what makes the character interesting, frightening, and more than just a mindless killer.  A creature of habit and routine, she doesn’t appear to seek out prey so much as choose them when the urge overtakes her.  This makes being even modestly nice to her almost like playing with fire.

She gets a small ray of hope in the generous friendship offered by bride-to-be Olivia (Brea Grant, A Ghost Story), a casual acquaintance that pings Claire at first largely because she is desperate for someone to do her hair for the wedding and later because she can see several similarities between the two of them.  At first resistant to get close to Olivia for fear of rejection, Claire soon finds solace knowing someone actually wants to spend time with her.  So she makes a conscious decision to leave her underground lair locked and bolted.  While the friendship teeters on peculiar, the more Claire warms to her new chum to further she’ll go to protect her well-being from anyone that tries to hurt her or interfere with their connection.  When Olivia herself tries to cut ties, it sends Claire on an even more dangerous spiral into the darkness she has been trying to avoid…and back down into her basement.

I found myself rather engaged with The Stylist throughout and it’s partly due to the script from Gevargizian and co-writers Eric Havens and Eric Stolze not being as predictable as it seems from the outside looking in.  Yes, the usual obsessive friend/jilted bestie hang-ups are all there from the embarrassingly awkward phone call when Claire goes too far to Claire breaking into Olivia’s home (there’s a weird scene here that I won’t spoil but I think the movie didn’t need it to illustrate Claire’s feelings) and almost getting caught but the screenplay also has more than the usual number of character-building scenes that help flesh out who these people are.  Often in these sub-genre films we never understand why these lost souls have come to this point and instead of making it a mystery I liked that the writers created an interesting origin story.

What also keeps this afloat are the two lead performances from Grant and especially Townsend.  Repeating her performance from Gevargizian’s original short film this is based on, Townsend’s unraveling glamour technician doesn’t go too far over the top to be campy, but she doesn’t undersell it either.  She has a brutal streak in her if called for but there’s a workmanlike efficiency (or is it serenity?) to her main priority with a body that is quite chilling.  For her addition to the equation, Grant is a good counterpart to Townsend, never reducing the role to a mean girl we feel deserves what may be coming to her down the line.  It’s a tricky line to walk but Grant keeps her performance strongly centered and it makes even some of the weaker supporting characters better as a result.

The film could use a bit of a trim, there’s far too many scenes following Townsend around when she’s not doing much and several scenes that feel extraneous to the forward motion of the plot.  I wish the ending had as much creative spirit as nearly everything that came before it because you can see it coming from a mile away, but I mostly just wanted a stronger resolution for the actors seeing that they contributed so much to the film up until that point. When Gevargizian focuses her action just on the two leads, The Stylist clips along nicely.  Overall, it’s nice to see that you can have your blood and gore and still make a rather intricate character study at the same time.