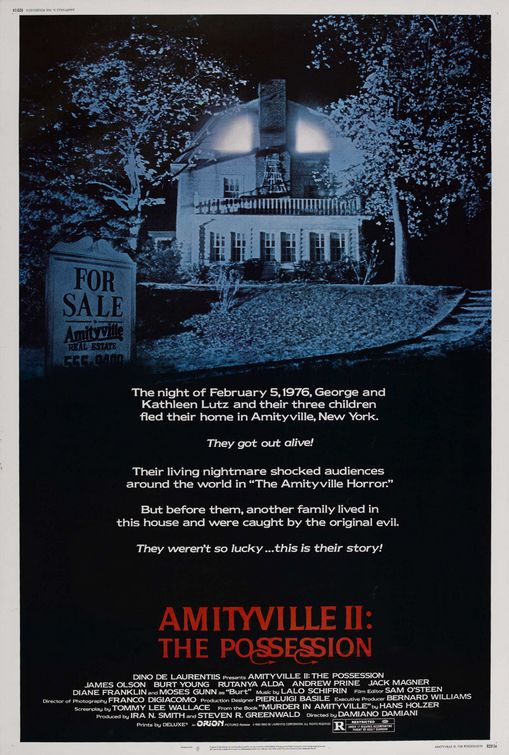 Synopsis: A family moves into their new home, which proves to be evil, resulting in the demonic possession of the teenage son. Only the local priest can save him.

Review: Few would argue that 1979’s The Amityville Horror is any kind of movie to write home about.  While it’s poster, preview, and press shots suggested a snazzy new twist on The Exorcist the final product was ham-fisted, poorly acted, and more funny than scary.  Still, the public that had made the book that inspired the movie a bestseller turned the feature film adaptation into the second highest grossing film of the year ahead of Alien, Apocalypse Now, The Deer Hunter, and The Muppet Movie.  I mean…think on that…it made 86 million dollars, 20m short of the #1 title, Kramer vs. Kramer.

Three years later new producer Dino De Laurentis took over the property and made this prequel to the events that transpired in the original.  Now the movie would focus on the murders that took place in the house and supposedly were the source of the haunting that plagued future tenants.  While it’s considered one of the stronger entries in the franchise of countless sequels spawned over the next several decades, it’s easy to see where director Damiano Damiani and screenwriter Tommy Lee Wallace (Fright Night Part 2 and Halloween III: Season of the Witch) ripped off other films when piecing together their contribution to the Amityville legacy.

The Montelli family has moved into that soon to be infamous house with the windows that look like eyes.  Nestled into the sleepy hamlet of Amityville in Long Island, NY the family has relocated to start a new, quieter life.  Still, they bring some major baggage with them.  The father (Burt Young) is an abusive drunk, the mother (Rutanya Alda) is religious woman frightened of her husband’s anger, and while their two youngest children seem to adjust well to the new living arrangements it’s tougher on eldest son Sonny (Jack Magner) and daughter Patricia (Diane Franklin).

Sonny’s a loner, a perfect vessel for the evil that lurks within the house to prey upon.  It isn’t long before Sonny’s demeanor changes and he becomes more physically hostile to his father and sexually predatory with his sister, both unfortunately icky subplots that just don’t feel good.  The more the family fights to save Sonny’s soul, the deeper the possession becomes.  If you’ve seen the opening of The Conjuring 2, you’ll know what happens next…if you haven’t, well, it doesn’t end well.

Though operating on a small budget, Damiani makes his film effectively creepy and often downright frightening as Sonny begins to show outwardly the possession going on within.  There’s good use of lighting to keep figures in the dark so that they can be discovered at precisely the right moment and the tension builds slowly but aggressively.  Performances are uniformly good and, gross incest plotline aside, Wallace’s script goes for realism instead of hyperactive hysteria.  The film has several climaxes, and each arrive with an assured flair for intensity.

Far less successful than its predecessor, Amityville II: The Possession still gives me the chills all these years and multiple viewings later.  It’s a dark movie though, filled with some hard to watch sequences of physical abuse and inappropriate conduct that’s in no way glorified or excused.  The focus of the horror is on the house but it’s tenants might not have been all that good to begin with.