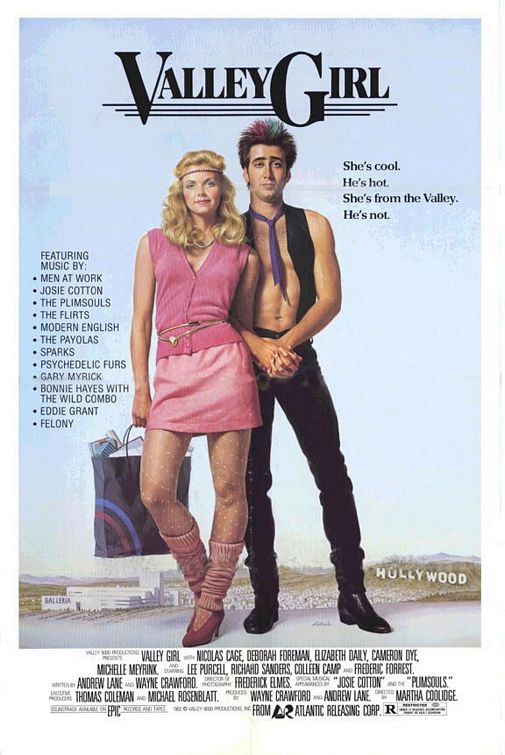 Synopsis: Julie, a girl from the valley, meets Randy, a punk from the city. They are from different worlds and find love. Somehow they need to stay together in spite of her trendy, shallow friends.

Review: Boasting one of the best soundtracks of the 80’s, Valley Girl is a film I’ve seen countless times but never can seem to remember what it’s all about.  I get the general plot line and remember the characters but how they get from the start to the end seems to vanish once the credits roll.  That’s not always a bad thing and it helps that the movie is filled with excellent nostalgic shots of various California locales of the day.

Foreman is our valley girl and while she does have that groovy accent down it’s not over-the-top like many movies tried to imitate after.  I kept being reminded of Alicia Silverstone in Clueless while watching Foreman nicely float through the movie.  Her performance is understated enough to explain why she may not have been the breakout star that she probably should have been.  I always shudder a bit when I have to start to review Cage but here we get the young and relatively sane Cage rather than the absolute trainwreck he’s become.  I’ve liked him better in the movies he made after this but he and Foreman make for the perfect awkwardly matched pair.

The rest of the cast is filled with familiar faces and some we’ve never seen again.  Watching it now the film works so much better because it’s not chock full of “stars of tomorrow” and Coolidge directs them all with a loose style in line with the mindset of the young Los Angelinos they all were.

Try to get over the now passé storyline of star crossed lovers and keep in mind what film was like back then.  Movies for teens were either the dime a dozen slasher or sexploitation films and Valley Girl represented a different voice to young filmmaking.  It’s not hard to see why the film was praised for going against the grain…even though it was well documented that Coolidge was contractually obligated to deliver a finished movie with a minimum of three topless shots.   I’ve actually watched the movie a second time since I originally screened it for review here and the second viewing only firmed up my feelings expressed throughout this review…and this time I also remembered the plot!

One comment on “Down From the Shelf ~ Valley Girl”