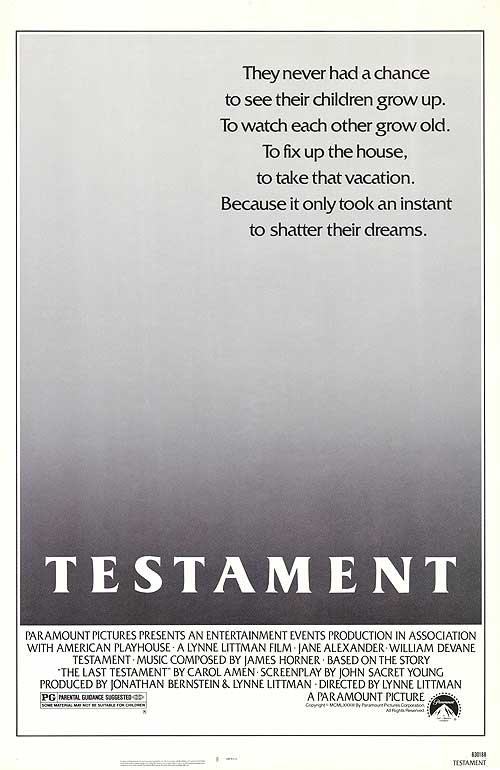 Synopsis: Nuclear war in the United States is portrayed in a realistic and believable manner. The story is told through the eyes of a woman who is struggling to take care of her family. The entire movie takes place in a small suburban town outside San Francisco. After the nuclear attack, contact with the outside world is pretty much cut off.

Review:   Nuclear war has been put on film in so many varied and bombastic ways throughout history.  From the comedic (Dr. Strangelove) to the action (Terminator 2: Judgment Day) to the realistic (both incarnations of Fail Safe on TV) the famed “Mushroom Cloud” has had its fair share of screen time.  Still…none of these movies really gave time to the honest and human side of what is left behind when the dust settles and life has to go on.

In the early 80’s, Testament was originally envisioned as a made for television movies.  Paramount saw they had a major product on their hands and quickly moved it forward as a big screen release.  Now audiences in 1983 would see the devastation that happens to a town and the loss that one family suffers after an attack on our soil leaves little options for survival.

In case you haven’t guessed it…this is one somber piece and you should be prepared for a film that doesn’t take the easy way out. What’s so miraculous about Testament is its utter devotion to the truth while continuing ever onward.  At no point do we have a big moment where one of our main characters speechifies about the horror of death or laments the fate of others just to make the audience feel more comfortable with what they are seeing.

As the mother of your Average American Family Jane Alexander was deservedly nominated for an Oscar for her work here and she may have even won…but she was up against equally strong competition from Meryl Streep, Debra Winger, Julie Walters and eventual winner Shirley MacLaine.  Alexander gives such dignity to her character in the face of unspeakable loss and never sacrifices the work for getting an especially good moment.  Her whole performance is a “good moment” and I believed everything she did.

Haas, Zal, and Harris play her children and Devane her husband.  In his first movie role, Haas has the wide-eyed wonder of a child to young to truly understand that life will never be the same and Harris (who I still remember from his small role in Airplane) excels with a role reversal halfway through the movie.  Zal and Alexander share what may be for me one of the most unforgettable scenes ever as mother and daughter have a very different and heartbreaking “birds and bees” discussion.

Unforgettable scenes are hard to come by in film and Testament has several.  Credit must be given to Littman who directs the piece with a sensitivity sadly missing from many movies nowadays.  I think it’s probable that her work as a documentary filmmaker aided her in capturing moments that were real and seemingly unrehearsed.

It’s a tough movie but incredibly worthwhile.  There is a journey taken in these ninety minutes that is rewarding, sad, and ultimately inspiring.  Seek it out…