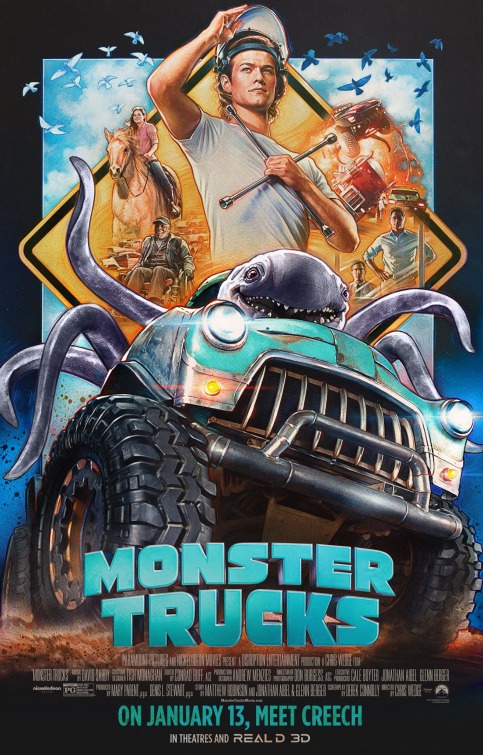 Synopsis: Looking for any way to get away from the life and town he was born into, Tripp builds a Monster Truck from bits and pieces of scrapped cars. After an accident at a nearby oil-drilling site displaces a strange subterranean creature,Tripp may have just found the key to getting out of town and a most unlikely friend.

Review:  It’s not always the case, but when a completed movie sits on the shelf watching numerous planned release dates come and go it’s a sign something isn’t quite right.  Filmed nearly three years ago and waiting for a release date ever since, the early notices for Monster Trucks weren’t great and this silly (okay, stupid) family fare became the scapegoat for its studio (Paramount) to lay some of their money problems on.  I’m not sure how that all came about but there’s little in doubt the movie isn’t anything someone would be proud to feature on their tax returns, resume, or digital library.

Creaky from frame one, Monster Trucks shows its battle scars of reedits and reshoots loud and proud with familiar faces being introduced and then vanishing (Oscar nominee Amy Ryan pops up at the beginning and then is MIA until the epilogue, same goes for a wheelchair bound Danny Glover) or actors sporting different hairstyles and/or obvious wigs from one scene to the next.  That leaves the movie with ideas that are hard to string together, let alone follow with any kind of interest.

Teen Tripp (blank faced Lucas Till, Kristy) wants to get out of his small town and into…well, I dunno and obviously neither does the movie because Tripp is painted as someone that doesn’t know what he wants, but it sure isn’t what’s standing right in front of him.  Pined after by a sweet classmate (Jane Levy, Don’t Breathe), he’s a loner grease monkey more at home in the junkyard where he works than in school or at home.  His mom has married the local sheriff (Barry Pepper, The Lone Ranger, sporting lips so purple as to suggest a serious lack of oxygen) and his loser dad (Frank Whaley, Ironweed) is out of the picture working for a local oil company.

It’s at the drill site for the oil company where three creatures escape when the evil CEO (Rob Lowe, Sex Tape, oilier than the crude his company peddles) ignores environmental warnings of digging too deep.  Two “monsters” are captured but the third finds his way into Tripp’s life and fixer-upper roadster.  Going over what happens next isn’t worth my time or yours, but know that Tripp’s new friend Creech somehow becomes part of the car and improves the life (and gas mileage) for its young owner.

Directed by Chris Wedge, Monster Trucks is a very lame attempt at catering to a specific audience who are already wise enough to know there are better options out there.  Whether it be from its long gestation or problematic production process, no one seems to be invested in the film and that goes double for the special effects team.  I’ve seen better effects in a Hot Wheels commercial and at least those are around 30 seconds.  At 100 minutes, Monster Trucks is the kind of roadkill material audiences of all ages are wise to avoid.