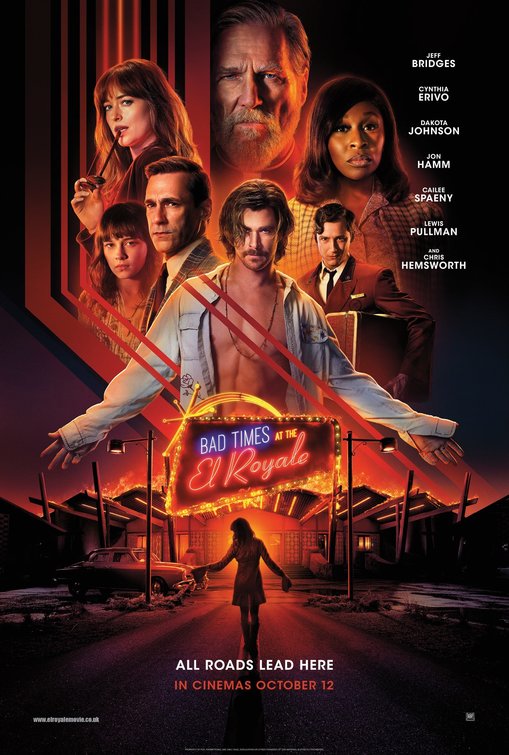 Synopsis: Seven strangers, each with a secret to bury, meet at Lake Tahoe’s El Royale, a rundown hotel with a dark past. Over the course of one fateful night, everyone will have a last shot at redemption – before everything goes to hell.

Review:  After making a sizable splash with the super fun horror film The Cabin in the Woods and then netting a well-deserved Oscar nomination for his adaption of The Martian, Drew Goddard was clearly given a wide berth for his next project.  He was also evidently given final cut of the movie because Bad Times at the El Royale winds up clocking in at a staggering 141 minutes.  Now, I’m all for movies that take their time but they have to earn their running length and, while I enjoyed El Royale for the most part there are absolutely sequences that could be trimmed or removed all together to keep the film moving along.  This is, after all, a crime drama that sees a group of strangers converging on a motel that sits on the border of two states one rainy night.  Told from various points of view (it has a Pulp Fiction vibe to it) with each person adding a piece to a complex puzzle of deception, the movie worked far better for me than some of my critic colleagues and that’s totally fine.  It’s a movie that I think will play best in a home viewing instead of in a theatrical exhibition so you can stretch out and get comfortable.  Though it’s filled with A-listers like Chris Hemsworth (Thor), Dakota Johnson (Suspiria) and Jeff Bridges (Only the Brave), it’s actually newbies Cynthia Erivo (Widows), Lewis Pullman, and Cailee Spaeny (On the Basis of Sex) that manage to be the most memorable.  Worth a look.