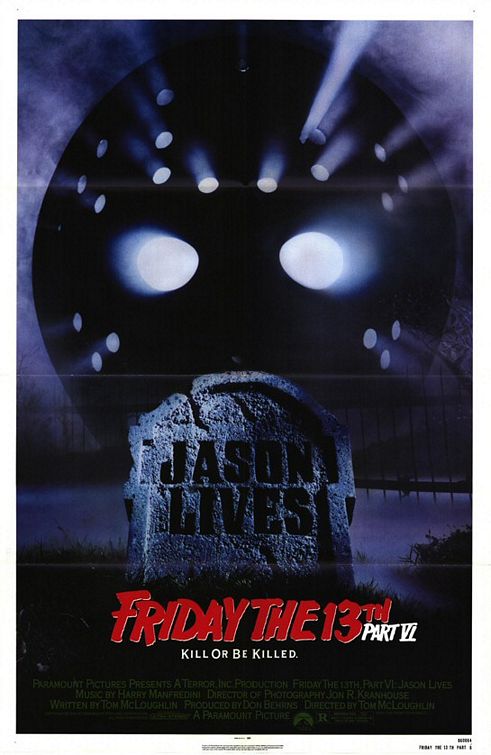 Synopsis: Tommy Jarvis goes to the graveyard to get rid of Jason Voorhees’ body, but he accidentally brings him back to life. Jason wants revenge and Tommy must defeat him once and for all!

Review: In case anyone has missed it, the Saw and Paranormal Activity movies are the new Friday the 13th and A Nightmare on Elm Street annual event films for horror buffs.  Since being released in 1980, the Friday the 13th sequels arrived on a pretty regular clip for the next six years though after Jason Lives: Friday the 13th Part VI was released in 1986, Jason took a year off before returning in 1988.  Of the countless sequels featuring the hockey-masked killer terrorizing nubile girls and oafish guys in the woods, Jason Lives: Friday the 13th Part VI is arguably the best of the bunch thanks to clever writing, snappy pace, good acting, and enough gore to earn the film an X rating before it was trimmed down to its R.

After misfiring badly with the previous entry, the filmmakers employed McLoughlin (of the little seen classic One Dark Night)to direct and write the next installment of the Jason Voorhees franchise to above average results.  McLoughlin was able to steer the film back to Crystal Lake without too much trouble and put Jason back where he belongs…with some big weapon in his hand and attitude to spare.  Opening with an unintended resurrection of Jason’s decaying corpse, the film is a machine that keeps moving and takes no prisoners.

Tommy Jarvis was first introduced in Part 4 and was the star of Part 5.  The third actor to play the role, Mathews is a nice leading man while retaining some boyish charm and impulse as he tracks down Jason to stop him once and for all.  He’s well matched with Cooke who (in my opinion) is the best female lead in any Friday sequel thanks to her good looks and playful bad girl vibe.  If you didn’t know it, you’d think Mathews and Cook were making a sequel to Footloose the way they make eyes at each other under the disapproving eye of her father (Kagan) who happens to be the tough chief of police.

Crystal Lake was renamed Forest Green in an attempt to make people forget about the massacres that happened in and around the campgrounds but Jason only knows it as home as he slices and dices his way through the woods back to…well…we never really know where Jason is headed or why…just that those who enter his woods have a shorter life expectancy.  Until Jason X (in space!) was released, this entry had the highest body count of any Friday sequel and it earns it mightily with excessive kills of its secondary characters.

With the gore level up so high, it’s refreshing that the filmmakers dialed by the excessive nudity and sex that were selling points at the time but also made the films that much sleazier to watch.  There’s not a boob on display here…unless you count the late Ron Palillo in a head-scratcher of a cameo role in the film’s opener.

McLoughlin’s script is full of nicely funny bits that are a nice balance with the grisly heart of the film.  It was widely known that the Nightmare on Elm Street films had the market cornered on jokey one liners for Freddy Krueger so McLoughlin wisely stays away from Freddy’s turf and doesn’t make the film one big comedy routine for the wink-wink-nudge-nudge heck of it all.

The counselors in the film are a healthy mix of forgotten faces from soap operas or made for TV films.  Tom Fridley channels his uncle John Travolta as a doofus counselor and a pre-Ghost Tony Goldwyn shows up as well.  At times, there’s too many people in the mix and they’re really only there to provide Jason with a body to slash and that’s when the film begins to feel a bit repetitive.

Jason Lives: Friday the 13th Part VI is really when Jason Voorhees became this other-wordly being and an unstoppable force of nature.  In the previous entries he was always a man that just happened to be able to take an axe to the head in good stride.  Here he’s been brought back to life Frankenstein style so there’s no real way to say what will do him in.   McLoughlin sorta threw out the rules for this film and ever since Jason has been a killing machine that can’t be restrained.  As much good as McLoughlin did for the series, it’s possible that he ushered in the films that were to follow.

I prefer to think of the film as breathing new life into a franchise that was in serious disrepair.  What began as a solid indie thriller in the summer of 1980 had blossomed into a cultural icon and cash yielding franchise that Paramount Pictures was desperate to keep going.  McLoughlin brought Jason back to life in fine form and thanks to a knowing take on the material; it works better than other sequels before or after.