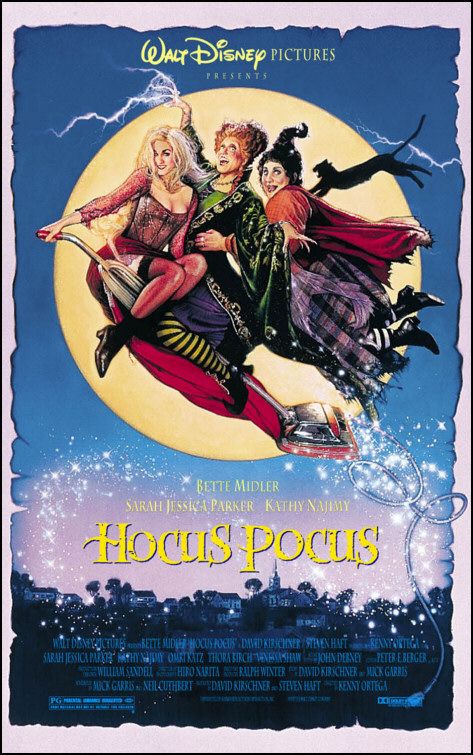 Synopsis: After 300 years, three sister witches are resurrected in Salem Massachusetts on Halloween night, and it us up to two teenagers, a young girl, and an immortal cat to put an end to the witches reign of terror once and for all.

Review:  Though it has gone on to have a healthy life on home video/DVD/BluRay, it’s hard to believe now that when it was released in 1993 Hocus Pocus was a disappointing flop for Walt Disney Studios.  Receiving mixed reviews the movie underperformed at the box office and barely made back its production costs.

Don’t blame it all on the movie, though.  For some strange reason Disney released the film in mid July up against Free Willy…the soon-to-be blockbuster film that opened big and left Hocus Pocus in its dust.  For a film centered on Halloween it’s a mystery why the film was unceremoniously dumped into a busy summer movie season.  Had it been released in late September or early October I’m betting the film would have landed better with audiences…especially families.

That’s not saying Hocus Pocus is a kiddie film because it’s really not.  Viewing it now, I’m a bit struck by how much it teeters on the edge of its PG rating with its plot hinging on a virgin bringing back three witches that were hanged three centuries before.  Add to that some scary situations, costumes, and effects and parents of younger children will want to make sure they are ready for what is otherwise a total ball of a movie.

Though on the surface Hocus Pocus was fashioned as a star vehicle for Midler, she graciously shares the attention with Parker and Najimy as they join her in chewing the scenery to bits.  You get the sense that all three ladies are having a great time and that energy is infectious to everyone and everything they come in contact with.  Yes, they are playing some pretty bad witches but filtered through a mostly family-friendly lens they are never truly threatening.

As the trio of pesky kids that threaten to ruin the witches plans to drink up the lifeforce from all the children of Salem, Birch, Katz, and Shaw are a mixed bag.  Birch was still in her whiny brat casting phase before she took on more serious fare and doffed her top in American Beauty.  Katz (who I still remember from Dallas) and Shaw (Ladybugs – love it!) are bit on the bland side but their fresh-faced look and squeaky clean appeal suggests an updated version of Tommy and Annette.

It’s really all about our witchy sisters, though; as they encounter a Salem that is far different than the one they last saw.  Some fish-out-of-water jokes are to be expected and it’s thanks to the comedic talents of the trio that even when they don’t exactly hit the bulls eye they are able to bounce back with another joke that does.  A funny cameo by Garry and Penny Marshall allows all five comic actors to have some fun with one another.  (Though suggesting that the brother/sister Marshalls are husband and wife was kinda iffy to me.)

Director Ortega (who was coming off another Disney flop, Newsies) presents his film with a nicely saccharine view of some dark proceedings but is smart enough to play on the talents of his stars.  It’s nice to hear Parker’s breathy voice used as a lure for children and Ortega would have been run out of town if he didn’t get Midler to sing a few notes.  Sing she does…and famously so  in a brief musical number that cleverly riffs on the song “I Put a Spell on You”.  I often will pull up that clip on YouTube if I need a pick-me-up – it’s a perfect moment that riffs on Midler’s turn in Gypsy and a clever nod to her concert days.

A top Halloween favorite of mine, Hocus Pocus really delivers with each viewing.  It’s a nice example of casting gone right…the film wouldn’t have been nearly as good without Midler who often cites this film as her personal favorite.  Add a game Parker and goofy Najimy, mix in a dash of magic, a virgin (!), and some Disney fueled scares and you have a solid winner….but you probably know that already.