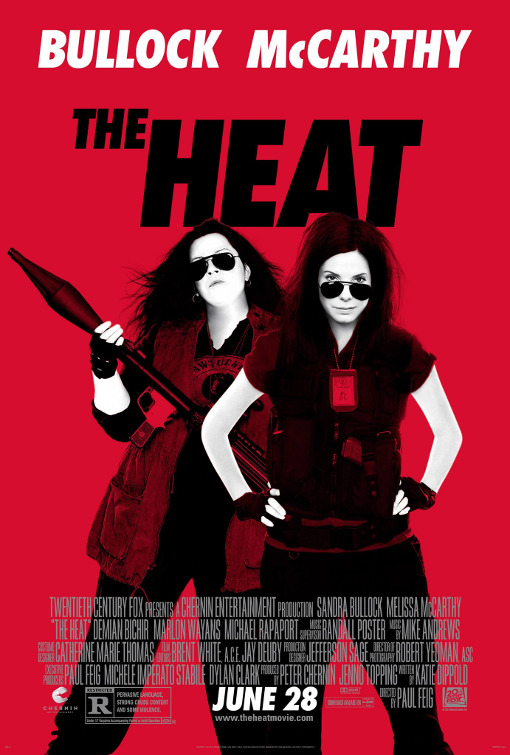 Synopsis: Uptight FBI special agent Sarah Ashburn is paired with testy Boston cop Shannon Mullins in order to take down a ruthless drug lord. The hitch: neither woman has ever had a partner — or a friend for that matter

Review: I recall the first time I saw the trailer for The Heat and marveled at how two and a half minutes could go back without a single laugh for a film that was supposedly a comedy.  Then positive early buzz had Twentieth Century Fox move it from an early spring opening to a prime June release date, so I was curious to see if the buddy cop film with two proven comedic stars (albeit adept at very different styles of comedy) partnering with the director of the wildly successful Bridesmaids may have just made a bad first impression.

Turns out it pays to trust your gut because The Heat is a barely lukewarm summer bummer, a movie that probably started out with potential but is unfortunately sacked by copious amounts of overstuffing an ungainly turkey of a film.  Don’t be fooled by the cleverly cut TV spots and trailers that suggest a laugh a minute comedy awaits all those that shell out their dough because the film itself is a chore to get through.

Perhaps knowing that the movie was rushed into production to accommodate Melissa McCarthy’s other commitments provides some context to why the film feels only half thought out.  I’m wondering if the script from television writer Kate Dippold (Parks and Recreation) didn’t start out as something more interesting because the movie seems to have been tailored to cater to McCarthy’s gruff comedic instincts and tweaked to make room for Bullock’s star wattage.

The film wants to have it both ways – it so desperately wants to be a hilarious genre re-defining buddy/cop picture while retaining a gritty edge with bloody violence.  The trouble is that it’s not funny enough to stand on its own and not gritty enough to be salvageable as a hybrid comedy-thriller.  Instead it’s a middle of the road affair with Bullock and McCarthy lost among the chaos.  All the cinematic chefs in the world couldn’t make this oil and water concoction palatable even though the recipe is right in front of them.

Though McCarthy has shown up in several movies where her improv skills have been a highlight, (The Hangover Part III, This is 40) in The Heat she lets her ad-libs get the better of her and the result is akin to the feeling of being at a bad sketch comedy show where the performer can’t right her sinking, laughless ship.  Her early scenes are so achingly bad and long that I half wondered if Judd Apatow didn’t direct the film instead of Paul Feig.

Worse is Bullock, so out of her element that she’d need a map to find her way into a joke and a compass to get herself out of it.  I like Bullock and probably appreciate her dramatic turns more than anything lately (I’m very much looking forward to Gravity, arriving later this year) but she does herself no favors here, resisting the wise idea to simply play her Special Agent as the straight (wo)man to McCarthy’s foul-mouthed Boston cop.

That’s another thing that bothered me about the film and only goes to show you how many opportunities were missed in the quick shooting schedule.  Though McCarthy is supposedly a dyed-in-the-wool Bostonian with a comically stereotypically family, there’s not a hint of an accent on her.  So at a dinner scene where her family (including the woefully underused Jane Curtain) is laying the accent on thick, when McCarthy chimes in she sounds like a visitor from Idaho.

The less said about the supporting cast, the better with not one person coming close to anything resembling a committed performance.  That’s largely due to the bi-polar script that feels as if it was either entirely made up or written scene-by-scene by different local comedians.  Did no one read, really read, this script?  It’s so formulaic and obvious that you could watch the first five minutes of the film and probably write verbatim the denouement of the bad guy and also the final scene between McCarthy and Bullock.

The few bright spots in the movie come from McCarthy…because even firing blanks she occasionally hits her target when the movie allows her to infuse the character with a little sensitivity and heart.  That’s where McCarthy really gets to shine and come alive…when she’s shown as vulnerable and layered.  Bridesmaids was smart in that it allowed this element to come out naturally but in The Heat it’s forced out in a way that’s no lasting fun for anyone.

There’s talk of The Heat 2 being fast tracked by the studio and if that’s the case, I fear what may await us.  I can only hope that any further adventures involving McCarthy and Bullock are better crafted than the cheap looking mess masquerading as a summer blockbuster.  Both actresses are better than this…you know it, I know it, and (worst of all) they know it.