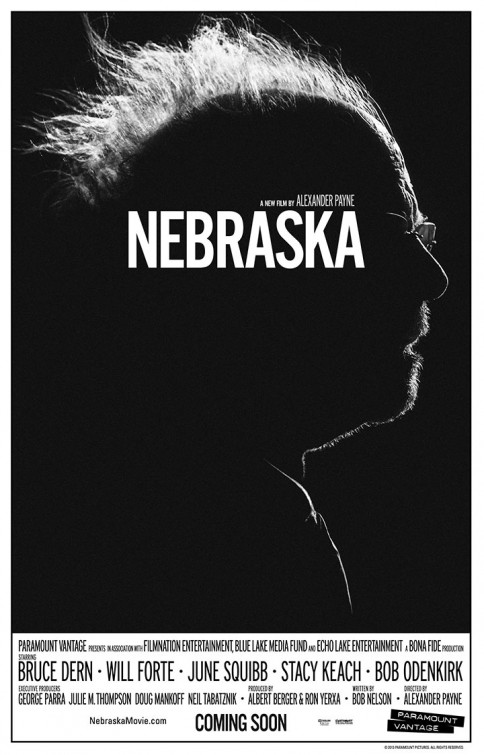 Synopsis: An aging, booze-addled father makes the trip from Montana to Nebraska with his estranged son in order to claim a million dollar Mega Sweepstakes Marketing prize.

Review:  If one were to look at through the seven films that Alexander Payne has directed, one could conclude that the director loves a good road trip.  Four of his films (Sideways, About Schmidt, The Descendants, and now Nebraska) deal with the central characters making some sort of journey from their home to a destination not totally familiar.  It’s through this trek that they discover new truths about themselves and the people that surround them.

You’d think that after three films this trope would get old but Payne once again demonstrates dexterity as a film craftsman that helps keep Nebraska on a focused course.  He’s not alone in his success, though, thanks to stark black and white cinematography from Phedon Papamichael.  Papamichael’s luscious lensing of the dense tropical locations of The Descendants is countered quite nicely with the way he turns his camera onto the vast open expanses of the Midwest.

Skilled directing and excellent cinematography aside, a movie this delicate has to have the right cast to convey its message and Payne has assembled another ensemble that works in harmony with Bob Nelson’s script to create an array of broken (and hilarious characters).

Center stage is veteran actor Bruce Dern who delivers a career high performance in an already richly celebrated resume of films from the last four decades.  He’s Woody Grant, an alcoholic of creaking bones and wispy hair that could be either drifting into senility or simply not caring what he remembers any more.  When he receives a letter in the mail from a Publishers Clearing House-like compay letting him know he’s a millionaire, he becomes fixated on getting to Nebraska to claim his prize and buy that truck he always wanted.

Much to the chagrin of his brusque wife Kate (June Squibb, About Schmidt), his stereo salesman son David (Will Forte) agrees to pack up his car and take his dad those many miles…because Woody has already tried to walk there on more than one occasion.  During the road trip there’s your typical father/son bonding but a stop in Woody’s hometown for a visit with old family, friends, and friendly enemies threatens to derail the journey altogether.

What Payne does so well is find new ways of exposing family secrets in a way that doesn’t feel trite or forced.  There’s a definite history of the Grant family in this rural rest stop where they find themselves and anyone that’s come from a small town will get a good laugh out of the way that news spreads fast amongst even the most out of touch townspeople.  The funniest moments (and Nebraska has quite a few) spring from the most mundane goings on and that’s the beauty of the discoveries Payne offers up.

Even at nearly two hours, the film doesn’t have a lot of slack moments.  You’d think that once Woody and David get off the road and basically wander around this quiet town that there’d be one or two moments where the film would lose some steam but in fact it only gets more interesting as its then that we truly learn more about Woody’s past and how his character influenced how he formed and raised his own family.

Deeply funny with a hint of a somber future, Nebraska still is one of the more entertaining films I’ve seen this year.  Curmudgeonly Dern and the irascible Squibb are sure-fire Oscar nominees but special mention should also go to Forte for stretching his dramatic chops far beyond the confines of his previous post-Saturday Night Live opportunities.  Hitch your wagon to this cross-country comedy and enjoy the ride.