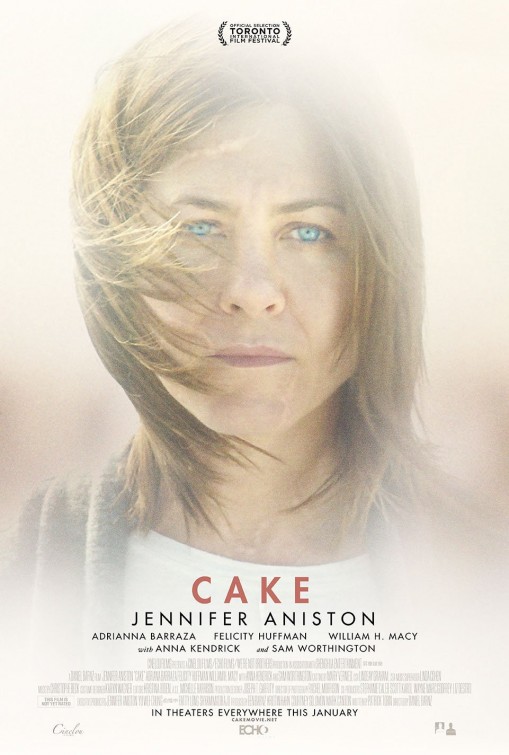 Synopsis: Claire becomes fascinated by the suicide of a woman in her chronic pain support group while grappling with her own, very raw personal tragedy.

Review: Though she’s getting a lot of recognition for her dramatic turn in Cake, I’m wondering if the masses have forgotten that this isn’t Jennifer Aniston’s first trip to the non-comedic side of films…but it may be her best. OK…so maybe films like The Good Girl and Derailed didn’t afford Aniston to truly carry a film with some weight behind it but they did show that there was more to her than that 90s show she was on and her twice yearly visits to the multiplex with a romantic comedy in tow.

Where Aniston seems to excel (and thrive) is with roles that are the exact opposite of how people see her. With other actors, that can come off as merely trying to pull a fast one on fans in a display of false supposed dexterity but in Aniston’s case you get the sense that she has real depth waiting to be tapped.

As Claire, Aniston (Wanderlust, We’re the Millers) finds that raw edge and runs with it, elevating the film in the process. For a movie about suicide, chronic illness, divorce, substance abuse, loss of a child, and depression there’s often the relief of a welcome promise of redemption around every corner. True, Claire fails to recognize these moments and continues on in pain and cynicism but as time goes on we see that she’s coming around.

Opening with a support group for chronic pain discussing the recent suicide of a member (Anna Kendrick, Into the Woods), Claire seems to be the only one unwilling to play along with the namby-pamby kumbaya-ness of the exercise. Obviously considering suicide once or twice herself, Claire becomes interested in the family the young mother left behind, particularly the husband (Sam Worthington, Man on a Ledge) that hasn’t dealt with his grief. Between popping pills and discouraging her well-meaning housekeeper (Adriana Barraza, Thor) from interfering with her wallowing, Claire gains a new perspective on where her life is taking her.

Though the premise of the film seems simple, there are a lot of complexities into the relationships featured onscreen. Barely able to stand up straight for long periods of time, Claire finds solace in random encounters with handymen and calls on her UCLA-trained law education to sweet-talk her doctor into yet another prescription of the pain meds she downs like candy. Worthington and Aniston have a nice rapport as they both flesh out characters in different stages of the acceptance of loss of a loved one.

The film is best, however, in its scenes between Aniston and Barraza. Oscar nominated for her work in Babel, Barraza quietly steals the majority of her scenes right out from under Aniston. For all of the Academy Award buzz surrounding Aniston’s work here, it’s really Barraza that was snubbed for more widespread recognition. There’s an empathy Barraza displays for Aniston’s character suggesting a mother/child relationship more than an employee/employer one. Though they bicker frequently, when push comes to shove both women stand up for one another in moving displays of emotional support.

I usually walk into these types of movies with the knowledge from experience that someone will start off one way and be a changed individual by the time of the final fadeout but with Cake I was never sure where it would all end. Of course we know how it should end but do we really want everything wrapped up in a ribbon as we head to our cars and into the world outside the movie theater?   A slice of life film that’s fairly filling, Cake may not have snagged an Oscar nom for Aniston (though she did get SAG and Golden Globe nominations) but it reaffirmed that she’s an actress worthy of more of these types of roles.