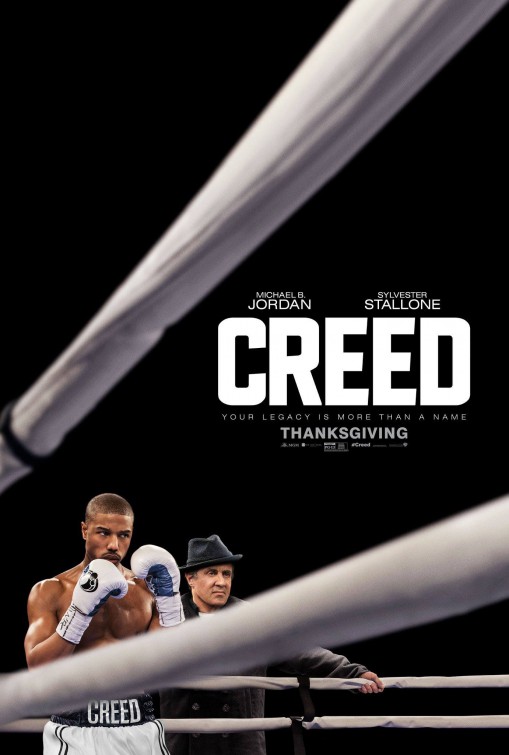 Synopsis: The former World Heavyweight Champion Rocky Balboa serves as a trainer and mentor to Adonis Johnson, the son of his late friend and former rival Apollo Creed.

Review: Back in July when I posted my thoughts on the preview for Creed I made an admission…that I’d only seen the first and fifth Rocky films.  It was a tough thing to say, not because the other Rocky films were classics but being The MN Movie Man, I just should have had those locked down years ago.  In my trailer review I also mentioned that before Creed was released I would go back and catch up…but alas, I only made it as far as buying the Rocky collection on BluRay.  So, like the books made into movies that I never finished before the release date arrived, I went into Creed only knowing a brief history of the boxing franchise that inspired it.

As most reviews will state, Creed is really Rocky 7 masquerading under a different name.  And that’s an OK thing because like the titular character, it needed to stand on its own and succeed on its own merits.  And succeed it does.  You won’t believe it, but let me assure you that this drama is an undisputed winner filled with knockout performances, dynamite filmmaking, and enough electrifyingly crowd pleasing sequences to keep the lights on in small city for months.

This is first and foremost a story about fathers/father figures/mentors, and the sons/young men that look up to them.  A pre-credits scene shows a teenage Adonis Johnson fighting his way through a stay in a juvenile correctional facility.  The illegitimate son of world famous boxer Apollo Creed, he’s a ward of the state when Mary Ann Creed (Phylicia Rashad) pays him a visit.  Interested in the boy her late husband never knew, she takes him in and provides for him while keeping him on the right path…and away from the sport that she believes killed her husband.

Flash forward a decade to an adult Adonis (Michael B. Jordan, Chronicle) fighting in a Tijuana boxing ring before heading back to his 9-5 job, his boss and Mary Ann none the wiser.  Turning down a promotion in favor of making a go as a professional boxer without Mary Ann’s support, Adonis finds his way to Philadelphia intending to track down the famous friend of his late father.

Of course, the man is Rocky Balboa (Sylvester Stallone, The Expendables 3) and at first he’s not interested in returning to his boxing roots, preferring a quiet life running his restaurant and paying visits to the graves of his late wife and best friend.  But Adonis is persistent and eventually the men are working together toward getting Adonis prepped for a big time fight with a towering rival…leading, as all of these movies do, to a showdown finale that ends the film on an emotional uppercut.

There’s a formula to any sports related film and Creed isn’t unique in its overall construction.  It’s the execution of said formula that makes the film work like gangbusters.  On one side of the ring we have Adonis desperate to prove something not only to himself but his father’s memory.  On the other side we have a faded fighter that sees a younger version of his friend (and himself) unaware of the effects the boxing life will have on his body and the sacrifices he’ll be making.

Director Ryan Coogler reteams with his Fruitvale Station star Jordan and has written a thoughtful extension of the Rocky franchise that honors Stallone’s original creation while crafting a new underdog hero story that’s more than just another entry in a long line of sequels.  Not only does Coogler break down the sport to make it less about jabs and blocks, he shows the commitment it takes to be the best of the best.  You really come to understand a boxer’s life, swollen eyes, bruised bones and all that goes with it.  Each punch lands with such force that by the end it’s possible you could forget you’re just watching a movie — I found that several times I had to fight the urge to stand up and cheer along with the film extras.

Whenever a romantic subplot is introduced in a sports centered picture, it can sometimes feel shoe-horned in but Coogler has given Adonis (and the film) an equal partner in Bianca (Tessa Thompson, Selma).  A singer with her own struggles, the film takes its time in showing their courtship…a courtship that winds up as tenderly authentic as the boxing scenes are brutally realistic.  Jordan and Thompson have excellent chemistry and you’ll be rooting for their relationship as much as you’ll root for Adonis to deliver a knockout blow to his final opponent.

Though Coogler’s use of real athletes more than a little stiff in the acting department can take you out of the picture, it somehow winds up lending a strange authenticity to the film.  Jordan trained so much for his role that the line between real fighter and actor is a thin one indeed, shown to great effect in one continuous take that seemingly lasts for three minutes.  Taking you from the locker room to the ring and through several rounds of a fight, the camera never cuts or stops moving — it’s a thrilling sequence, expertly accomplished by Maryse Alberti (already represented in 2015 with The Visit and Freeheld).  Alberti’s camerawork is so strong that I think you could watch the movie with the sound off and still be bowled over.  With the sound off, though, you’ll miss Ludwig Göransson’s (We’re The Millers) stirring score.  Interlacing the famous Rocky theme with unexpected an unexpectedly effective instrumentals, the music only adds to the excitement on top of Alberti’s visuals.  When Göransson’s perfectly timed reworked Rocky theme is introduced, just try to keep those goosebumps at bay.

Jordan’s star continues to rise and he’s delivered an award-caliber performance here, along with Stallone doing his best work in three decades.  Both men, along with Coogler and the picture itself, should be recognized by the Academy when they announce the Oscar nominations in January.  Based on the previews, I figured I would like Creed but I never thought it would be as moving and inspiring as it is.  Audiences are in for a true TKO with this one.