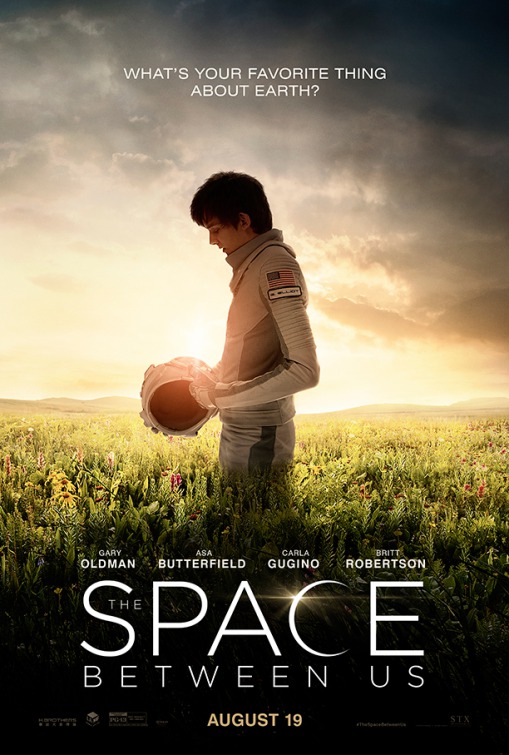 Synopsis: The first human born on Mars travels to Earth for the first time, experiencing the wonders of the planet through fresh eyes. He embarks on an adventure with a street smart girl to discover how he came to be.

Review: There’s going to be an easy litmus test as to how well you’ll enjoy The Space Between Us. If you can make it through the first five minutes without groaning and/or rolling your eyes than maybe, just maybe, this sci-fi adventure/teen romance will be worth your time. For everyone else, do yourself a solid and have a back-up movie prepared because as the film begins to lose all control of logic, tension, and interest the groans will just get louder and the eye rolls more strenuous.

In the vision of 2018 suggested by the movie, colonization of Mars is a reality and the first settlers are ready to blast off. Dubbed East Texas, the endeavor is the brainchild of Nathaniel Shepherd (Gary Oldman, Dawn of the Planet of the Apes) and serves as a chance to not only explore life on another planet but a chance for Shepherd to live out a childhood fantasy. Unable to physically make the journey due to an illness never fully defined, Shepherd voyeuristically watches the crew blast off and tracks their movements while big wigs from NASA (including an authoritative, if bored looking, B.D. Wong, Jurassic Park) keep an eye on the progress.

Early into the trip, mission leader Sarah Elliot (Janet Montgomery) discovers she’s pregnant but they’ve gone too far to turn back and she winds up having the baby shortly after arriving on the red planet, dying in childbirth. While the identity of the father isn’t immediately known, plenty of talking heads dub Sarah’s ‘behavior’ as inappropriate…making me wonder if the movie takes place in 2018 or 1968.

Flash forward 16 years and the baby has grown into angsty teen Gardner (Asa Butterfield, Miss Peregrine’s Home for Peculiar Children). Aside from a ramshackle robot (a stock character right down to his Brit accent and uppity demeanor), Gardner’s only real friend is Kendra (Carla Gugino, San Andreas) an astronaut that seems to have other responsibilities but is shown only as a well-educated babysitter. In between shifts in the colony greenhouse (leading me a first to be confused if Gardner was his name or his profession), Gardner chats up a lonely foster child (Britt Robertson, The Longest Ride) who doesn’t know her internet pen pal is literally from another planet.

Finding a clip from his mother’s personal items of a man that could be his father and driven in no small part by his developing libido, with Kendra’s help Gardner is eventually brought down to Earth. However, whatever freedom he thought he would have isn’t in the cards and he becomes a science experiment kept in quarantine. In short order, Gardner stages a daring escape and tracks down Tulsa who isn’t so happy her pal ditched her for 7 months while returning home through the stars. A cross-country chase ensues with Gardner and Tulsa hilariously pursued by Kendra and Nathaniel with all the conviction of a Looney Tunes cartoon. Along the way, secrets are revealed, love blooms, and every scene is written and performed like the cliffhanger final moments of a season finale.

On the performance spectrum, the range is anywhere from passively engaged to Gary Oldman. As a teen finding his Earth legs, Butterfield gets the gangly piece down…but unfortunately, Allan Loeb’s (Collateral Beauty) script sets him up first to be an introverted orphan in search of answers before switching it up to make him a romanticized dweeb that loses key brain cells in his new environment. On Mars, he’s marveling at the deeper context of Wim Wender’s Wings of Desire but on Earth he recoils in horror when he spots a horse trotting down the street. Gugino is typically dependable for a dose of grounded reality but paired with Oldman’s awkwardly earnest portrayal of a smarty-pants wunderkind, there’s no balance for either to find good footing. Also, Oldman can never decide if he’s from London or the Midwest. One moment his accent strains on the consonants and the next he’s practically demanding tea time. Robertson’s fairly one-note as a tough on the outside soft on the inside tomboy. It’s hinted she may have a talent for music but after plunking out a song on a keyboard at Sam’s Club, it’s never mentioned again.

Director Peter Chelsom doesn’t do much with the material either, moving actors and set pieces through a variety of hackneyed action sequences with little fanfare. He also isn’t able to inspire many sparks between Butterfield and Robertson, as both seem uncomfortably ill matched and kept together for the sake of the plot. Taking place in 2034, Chelsom’s spin on future living is delivered with little bells or whistles. Aside from some upgrades to personal computers and communication devices, teens still dress like hobos and no one is traveling around in flying cars.

Worth keeping your distance from, The Space Between Us was originally set for release in August and then pushed back again to December. Ostensibly, it was moved to the less busy pre-Valentine’s Day weekend with the hopes to attract some of the date night business for those unable to go for Fifty Shades Darker. Too light to stay Earthbound and too lackluster to be fueled by a mission to Mars, this misfire has no atmosphere to speak of.