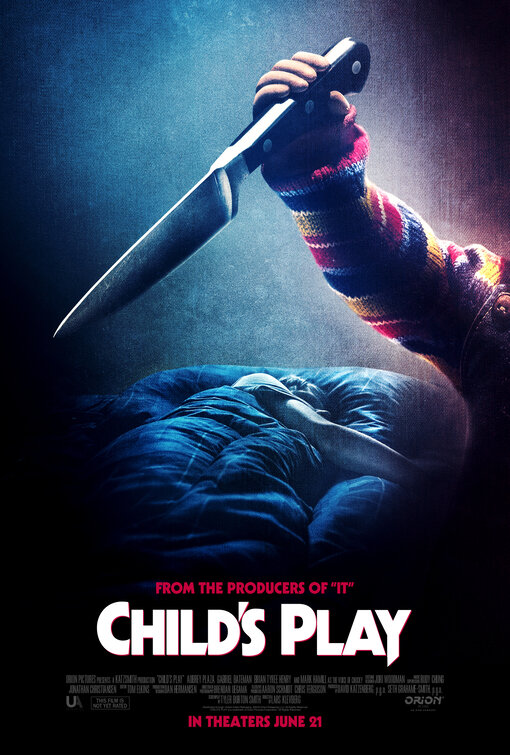 Synopsis: A mother gives her son a toy doll for his birthday, unaware of its more sinister nature.

Review: I’ve heard a lot of talk lately from podcasters and film pundits about how 2019 has been a disappointing year for theatrically released films and up until I saw the remake of Child’s Play I didn’t agree. Having now seen the low-budget and low-brain cell reimagining of the 1988 surprise shocker that launched an unexpectedly lucrative franchise, I can easily point to it as the type of film that is sinking the box office and eradicating audience expectations of quality. This is a bottom-feeding exercise in how to take a valued property and dumb it down to the lowest common denominator in filmmaking and leave nothing but crude remnants of an idea that have been hastily assembled.

In the original film, the soul of a murderer was transferred into a popular children’s doll that started wreaking small-scale havoc in the life of a boy and his mother. When young Andy told his mother that the strange things that have been happening were because “Chucky did it”, it was spooky and ominous. Spawning six sequels and a television series currently in development, the Child’s Play series morphed from outright horror into a mix of comedic meta commentary in-between some gruesome bits of gore…but they were always interesting thanks to the effects team that brought Chucky to life. Add in Brad Dourif’s instantly recognizable voice of the demonic doll and you have a one-name film villain that stands up next to the likes of Jason, Freddy, and Michael.

On paper, I can see why Child’s Play might seem like a good property to get an upgrade. It’s been over thirty years since the first film was released and technology has changed in the three decades since Chucky was first introduced. Why not re-imagine Chucky as Buddi, an Alexa-ish techdoll that not only would be a best friend to your kid but could also control all of your branded devices designed by the same manufacturer? And how about removing the supernatural element, while you’re at it. No more evil soul inhabiting the doll, just have him programmed without restrictions by a vengeful worker. Now his loyalty would know no bounds…he’d kill to be your friend to the end.

Having just moved to a new apartment, Andy (Gabriel Batman, Annabelle) and his single mom Karen (Aubrey Plaza, Safety Not Guaranteed) are still adjusting to their new environment. Karen works at a knock-off department store that is getting ready for the launch of the Buddi 2, the next generation of best-selling toys that every kid in America wants. When a first generation Buddi is returned, Karen convinces her manager to let her keep it and gives it as a gift to her son as an early birthday present. At first, the doll is fun in a kitschy weird way for Andy and it’s unfiltered vocabulary attracts the attention of several kids in the apartment building. As Andy makes more friends and loses interest in his weird-looking toy, the doll starts to get jealous of anyone that comes between him and his best friend and takes deadly measures to make sure he’s always #1.

The problem is in the, ahem, execution of Tyler Burton Smith’s hokey pokey screenplay. It just isn’t sophisticated enough to go beyond a simple logline concept that bears the fruit of a fully realized motion picture. There’s nothing in the movie that is of any value or permanence, be it character, motivation, or logic. We’re supposed to believe Karen and Andy are new to the area yet Karen seems to have a long-term boyfriend and appears quite settled in her dead-end job. Worse, the movie introduces Andy as having a hearing impairment that is barely discussed or factored into the plot unless it is the punchline for an off-color joke. One moment a detective (Brian Tyree Henry, If Beale Street Could Talk, slumming it here in more ways than one) is troubled by grisly deaths that seem to be linked the apartment complex his mom lives in and the next he’s laughing it up over dinner with a boy (Andy) he just met and invited in. I’m positive the movie was edited down from a longer cut (thank God!) but no one bothered to make sure the continuity was there from one scene to the next. A major character dies and aside from a scene showing Karen swigging a glass of wine they are barely mourned.

Then there’s Chucky himself. I don’t know how it’s possible in 2019 to have such an ugly, fake looking doll but the producers of Child’s Play have managed to make the 1988 doll look positively futuristic in comparison. The mouth crudely moves up and down, making a big O and a squished O, all while Mark Hamill’s (Star Wars: The Last Jedi) goofy, nasally voice of Chucky is coming forth. It’s like an awful roadside animatronic you’d find in some backwater Kentucky town. You never see the doll move independently and the few times he does move his hands in quick action the animation is decidedly questionable. The only performance worse than the doll is Plaza, who is atrocious and atrociously miscast.

Director Lars Klevberg has had some small success with his Norwegian horror entries but his big shot at a Hollywood film is a major bust. The creativity is nil and even the cinematography is frustratingly pedestrian. There’s also a major question on taste level here. Eviscerating animals, ripping off faces, spraying little girls with blood, and viciously knifing old ladies isn’t exactly the type of horror film we should be clamoring for right now. It’s like the movie got a greenlight and then no one knew what to do…though I’m not convinced any studio head actually read the screenplay for this nonsense. Usually I roll my eyes at devotees of a film that whine about a modern remake but in the case of Child’s Play I can say the fans were right to be worried. This is an abysmal effort, unworthy to carry the Child’s Play moniker.