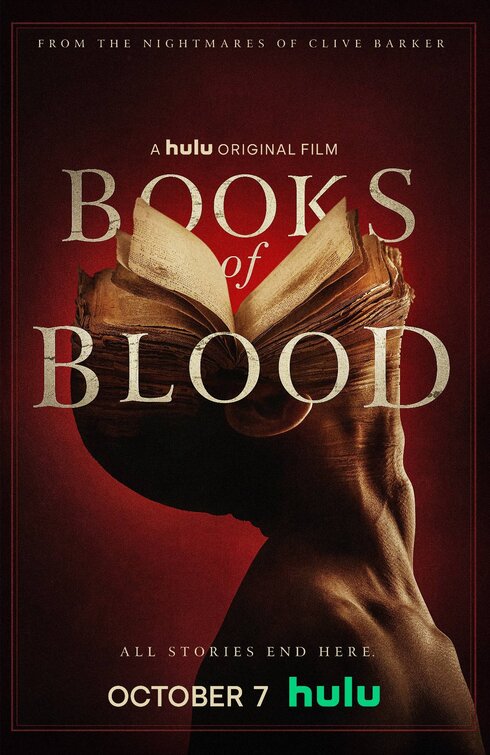 Synopsis: A journey into uncharted and forbidden territory through three tales tangled in space and time.

Review:  Chances are that as Halloween approaches, the watchlist of many diehard fright fans will include at least one film that’s sprung from the mind of fantasy-horror writer Clive Barker.  Staring with Hellraiser, the unforgettable forever classic from 1987 that launched an endless series of sequels all the way to 1990 cult favorite Nightbreed and 1995’s Lord of Illusions, similarly admired by a select few with a taste for the bizarrely macabre there is usually something for every kind of Barker fan.  The most commercial of all Barker’s work is undoubtedly the truly terrifying Candyman from 1992, taken from his short story “The Forbidden”.  Along the way, Barker has contributed the odd short story to horror anthologies, with a number of them (including those that inspired Candyman and Lord of Illusions) taken from his “Books of Blood”.

Published between 1984 and 1985, “Books of Blood” is Barker’s collection of thirty short stories that run that gamut from ghoulishly gory to fiendishly funny, all very in line with Barker’s taste for blending fantasy and horror in a potent mix.  It’s no wonder several have leant themselves nicely to film adaptations and it shouldn’t come as a huge shock that there was already an attempt in 2009 to make a full-length movie inspired by the stories.  What I’m surprised to find, though, is that it’s taken this long for a streaming service to realize that biting off a little Barker at a time is the best way to digest his extreme storytelling.

Hulu already started off October on shaky ground with the eight-episode Monsterland which failed to deliver the kind of chills its low-key modern day stories of strange occurrences were (I think) meant to invoke.  It’s nice to report that they’ve followed that disappointing effort with a spooky and well-crafted anthology film that takes Barker’s volumes of stories and uses them both as the basis and a jumping off point to tell a trio of intersecting tales.  Still, while the results deliver the promised guts and gore and the overall entertainment value is somewhat high, unevenness in storytelling keeps Hulu’s Books of Blood from reaching the top of the charts.

A prologue sets ruthless hitman Bennett (Yul Vazquez, Last Flag Flying) on the trail for the mysterious Book of Blood which promises a payday greater than any high-profile target he could score.  While he speeds off to track down the rare find, we flip several hundred miles away and meet Jenna (Britt Robertson, Tomorrowland), a troubled artist college student recovering from an unknown traumatic event at the beachside home of her impatient mother and mom’s new boyfriend.  Hearing of her mom’s plans to send her away for treatment, she hops on a bus and, fearing she’s being pursued by an unknown man, gets off in a quiet town where she finds a local bed and breakfast run by Ellie (Freda Foh Shen, Ad Astra) and Sam (Nicholas Campbell).  Deciding to hide out in the couple’s pleasant lodgings for a few days may be just the rest she needs to clear her mind, but is their calm demeanor hiding a sinister secret?

The second story follows Mary (Anna Friel) a noted psychologist who has gotten good at explaining the unexplainable.  When she meets Simon (Rafi Gavron, A Star is Born), though, she finds that she can’t provide a rationale for how he’s able to produce his specific talent that appears to help him communicate with the dead and the first message is from her deceased son.  The closer the two work, the more intimate their relationship gets but Simon should be careful if he tries to pull one over on Mary…or any spirts that don’t like to be misrepresented.  Hell hath not fury like the undead and someone in this story learns this the hard and extremely painful way.

The final tale is the weakest of all three and circles back to the beginning characters we’ve almost forgotten about.  It manages to bring all three stories together, true, but it doesn’t have the substance of the previous two parts and feels like the bookends it really is.  Though the film does actually wrap up with an added extra bit of fun at the end that alters some of the storylines and suggests the books of blood have more tales to tell, there’s somewhat of an overall feeling that writer/director Brannon Braga didn’t meet his goal of bringing this over the finish line.

Braga does have some nice atmosphere throughout, particularly in the Jenna segment when we get to Ellie and Sam’s too perfect house and again in the third segment in one specific well-timed scare and the performances are all pitched to the right level for the material.  No one is overselling or underplaying, which lets the sometimes silly situations play at a far more normal level than they should and the more gratuitous sequences feel nicely grounded.  Friel, more than anyone, seems to be enjoying her time amidst a lot of chaos and I also appreciated what Foh Shen brought to her sunshine-y (on the surface) motherly character.

Books of Blood is definitely worth checking out but one hopes that if there are future volumes there’s more material lifted directly from Barker’s work and less liberties taken with the material.  Don’t just snag Barker’s name and then not go all the way with it – if you want to play with the kind of ideas and extremes he does you have to be willing to push yourself a little further and Braga doesn’t seem to feel the need to do so.  What’s there made for a just fine Saturday evening watch but it could have been a lot scarier and creative in the way it weaved together its trio of terror tales.