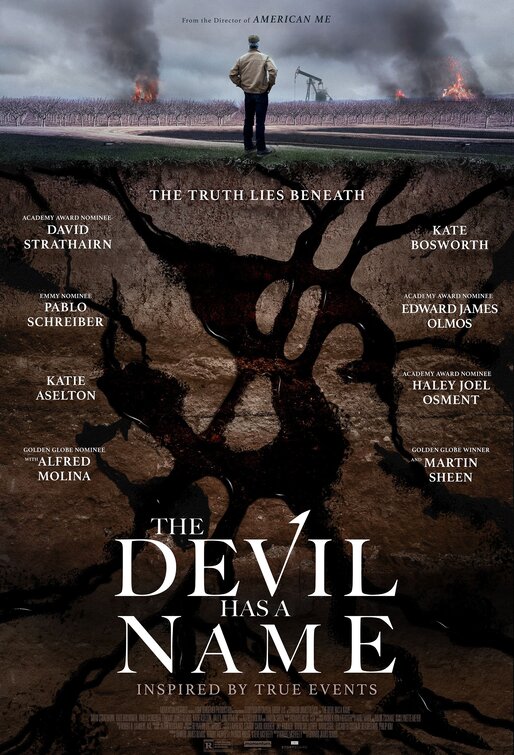 Synopsis: A psychotic oil matriarch leaves the whole industry exposed when she attempts to outfight a bullish farmer whose water has been poisoned.

Review: When Netflix first came out, the hardest part was waiting for those discs to come in the mail.  It was especially difficult when you got a movie that you hated and didn’t watch all the way through because you essentially just wasted up to a week of your monthly subscription waiting for another film to arrive.  That’s why the streaming service was such a fantastic upgrade because whenever you wanted to tap out of a movie or show that wasn’t grabbing you, there wasn’t as much guilt as before.  That’s both a good thing and a bad thing.  Good because of the reasons I just mentioned but bad because we’ve all talked to someone that stopped watching Schitt’s Creek after the first few episodes of Season 1 saying they “just didn’t get it” though we all know that show took several episodes to find its stride.  People just aren’t willing to stick with something if they aren’t into it…there’s too much out there to waste time.

I have a confession to make.  Sometimes I feel that way about screeners as well.  Look, when I say I’ll review something, I’ll review it and I’m going to give it my all.  Take the new drama The Devil Has a Name (not The Devil All the Time…which is, coincidentally, a Netflix film) from actor-director Edward James Olmos.  This was one of those examples where the movie started and I had that sinking feeling in my stomach that I had gotten myself into something that was going to be trouble to review.  It starts off very badly and stays that way for at least the first twenty or so minutes.  I wanted to chuck it and give up but forced myself to stick with it…and I’m glad I did because while it got only marginally better it did have some redeeming qualities that I wouldn’t have caught if I gave up at the outset.  On the other hand, the more I watched, the more problems I had with the turgid script, oversized performances, and sloppy filmmaking.

Gigi Cutler (Kate Bosworth, Homefront) is in big trouble with the head honchos at her family’s Houston-based business, Shore Oil.  For what, we aren’t sure of yet but, like many a film, she’s going to down a swig from a flask and tell them (and us) just what brought about her bad behavior.  Flashing back, we’re introduced to Fred Stern (David Strathairn, Lincoln) a widowed almond-farmer whose land has been unknowingly polluted by a nearby oil-rig owned by Gigi’s family.  They’ve found this out before him and, wanting to avoid a costly lawsuit, attempt to buy his land for a paltry fee via negotiations by local yokel Alex ( Haley Joel Osment, Tusk).  Sensing something isn’t right and eventually uncovering the truth with the help of his longtime foreman Santiago (Olmos), Stern turns the offer down and hires legal counsel (Martin Sheen, The Dead Zone) to sue the company.  A legal battle ensues which brings out a whole host of nasty actions and a brutal fixer (Pablo Schreiber, Skyscraper) into town to make sure nothing gets in the way of a win for the oil company.

Viewers are going to have to hunker down and commit to the film from the start, there’s no easing into Robert McEveety’s screenplay and the direction from Olmos (Wolfen) doesn’t help much either.  I found the first twenty minutes to be disorienting as character introductions were slack or nonexistent and when they are onscreen they’re so oversized that it feels as if Olmos used a fifth take where he told them to “be as big as possible, just for fun.”  The degree of seriousness afforded to some rote dialogue is pretty funny after awhile.  Things pick up once the legal proceedings begin (because who doesn’t love a good courtroom drama?) but even that starts to get wacky after a bit, with the kind of grandstanding and unbelievable turn of events even the soapiest of legal dramas would raise an eyebrow at.

Speaking of performances, I wonder if Strathairn watches the film and wonders what movie everyone else is in.  He’s essentially playing the same low-key role he’s played before and that works well for the high strung movie but everyone else can’t decide exactly what volume they want to pitch their performances.  Schreiber is having a field day with his professional slimeball, aiming for dark and lethal but landing on gentlemen’s club bouncer.  The only thing he’s missing is a well chewed toothpick in his mouth. Come to think of it, he may have had one of those, too.  It’s always great to see Olmos in front of the camera, but wearing two hats seems to have clouded his ability as an actor to question some of the crappy dialogue he has to wade through.  I don’t quite know where to start with Osment, what worked for him as a child actor has not carried over to adulthood.  He’s just completely unappealing (which is the point of the character) but as an actor he’s also unquestionably terrible. Aside from Straithairn, Bosworth probably comes off the best because she at least puts some dynamics into the role so she has some place to go.  There’s a regrettable scene where she goes mental on a piece of carpet but anytime she’s cool, calm, and collected is when she’s at her most dangerous…and most interesting to an audience member.

Clearly, this is a film with a targeted message at the protection of the environment but the message gets lost in the large performances (can I say again how awful Osment is?) and the messy storytelling.  Olmos has directed films before that have had more solid footing but for some reason, either the directing or maybe even it’s the editing, The Devil Has a Name gets off on the wrong foot and never finds its way back in time with the music.  There should be a better way of getting the point across than relying on the unreliable resources gathered for this project.

One comment on “Movie Review ~ The Devil Has a Name”