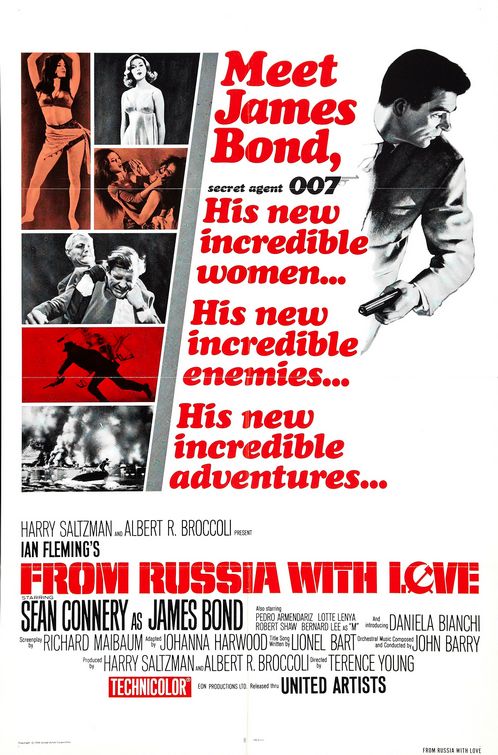 Synopsis: James Bond willingly falls into an assassination ploy involving a naive Russian beauty in order to retrieve a Soviet encryption device that was stolen by SPECTRE.

The second Bond adventure, From Russia With Love, was released almost a year to the day that Dr. No landed on US shores introducing audiences to Britain’s top secret agent.  Working with largely the same team that helmed the first entry and with now dreams of a franchise becoming a reality this first sequel was produced with a bigger budget and featured a globe-hopping 007.

What works so well for this film is its casting of several key roles.  Connery brings Bond back with a slightly softer edge than was on display in Dr. No.  He’s more relaxed here, in fantastic shape, and hits all the right notes that help to make him the best Bond around. Connery’s work here was in service to paving the way for future installments in allowing some levity when Bond wasn’t fighting the bad guys.

Speaking of bad guys, we have two legendary ones here.  German cabaret star Lenya makes a rare film appearance as the wicked double agent Rosa Klebb.   It’s here that we’re also introduced to SPECTRE, the organization whose minions would battle Bond in several movies yet to come.  Lenya takes her job very seriously, a wise choice considering that it would be easy to make the character cartoony.

The other smart casting move was Shaw as classic Bond baddie Grant.   Before he would go to battle with a great white shark in JAWS, Shaw was a buff blonde killer that famously goes head-to-head with Bond in a fantastic fight sequence set aboard a passenger train.  It’s in this fight where you get the feeling the film really hit a chord with its audience – returning director Young stages it brilliantly as he does several other action scenes set in Turkey and Venice.

The only casting bust here is Bianchi as Russian spy Tatiana Romanova.  With her voice clearly dubbed as many early Bond girls were, there’s not much a performance to be had.  She’s set-up to be a spy that is supposedly immune to personal connections but she’s not with Bond for five minutes before she’s hopping into bed with him.  This willy-nilly hay-rolling that Bond gets involved with can seem ludicrous to today’s audiences…but considering the accepted male/female roles of the age it does fit.

Matt Monro becomes the first singer to tackle a Bond theme song…but it’s interesting to note that though visual artist Robert Brownjohn designed a full length title sequence, the theme isn’t played over it as they would be for all other Bond films.  Instead, an instrumental track by long-time Bond orchestrator John Barry is used.

While a bit more genre-specific than its predecessor, the film does drag a teensy bit at times…but it always bounces back when the audience needs another thrill.  All said, From Russia with Love is a swell sequel that nicely sets the stage for Bond’s third outing.