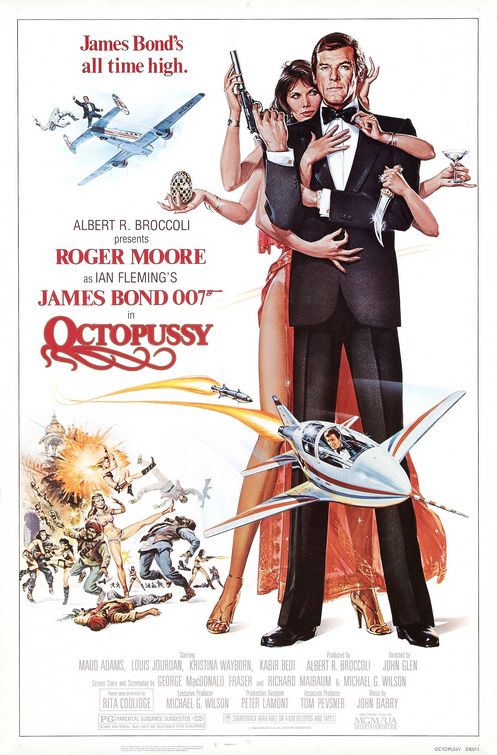 Synopsis: A fake Fabergé egg and a fellow agent’s death leads James Bond to uncovering an international jewel smuggling operation, headed by the mysterious Octopussy, being used to disguise a nuclear attack on NATO forces.

Review:  After a decidedly mixed reaction to For Your Eyes Only, the next Bond film is where the machine started to break down.  Though more realistic in tone than Moonraker, this reviewer still feels that For Your Eyes Only was a tad of a yawner.  While Octopussy is mostly a fairly silly entry in the grand scheme of things, it’s enjoyable in a goofball sort of way.  Now ‘goofball’ is all well and good if you’re making a spoof film but the producers of the Bond franchise were going for something different.

The film enters the dance floor with twisted ankle thanks to an opener that feels like its poking fun at previous entries rather than making its own mark.  Rita Coolidge’s rendition of “All Time High” over the credits is a fine song but perhaps a bit too languid for its own good.  It seems to suggest the film would have more to do with a romantic Bond angle that never comes to be.  Even our beautiful title character doesn’t show her face until well into an hour into the film where by that time audiences won’t want to wait for love.

Following Bond as he goes after a band of jewel smugglers, director Glen gives the film a softer edge than was evident in previous Moore entries.  So much of the movie is shot with warm tones and gauzy edges…and it plays nicely in contrast when Bond is put in peril in various international locales.  By this point I’m not sure if even Moore knew what he was still doing in the role and he seems to just be going through the motions of a character he’s gotten everything out of.

That leaves it to the supporting players to keep the movie afloat and they mostly do.  I’ve always found it an incredibly odd piece of casting having Adams play Octopussy.  Adams had previously appeared in a major role in The Man with the Golden Gun…and didn’t survive.  Had her character lived it would have been nice to tie her back into Bond’s life but as it stands here it just feels like everyone involved simply forgot she had already been a Bond girl.  Still, Adams is one of the most gorgeous of Bond’s ladies and she’s a solid actress on top of it.

I can’t look at Jordan without thinking of him being Swamp Thing…made especially confusing with several sequences set in a swamp-like jungle.  His Kamal Khan is one of the more enjoyable foes for Bond because he keeps his cards close to his vest.  Though Bond and Kamal Khan come face to face maybe one too many times without incident, I did enjoy Jordan’s two-faced schemer.

This being a Bond film…it couldn’t be just about a jewel thief and it once again boils down to possession of nuclear weapons with an added twist of pitting one country against another by a totally different foreign power.  The problem with Octopussy is that the stakes never feel so high that 007 wouldn’t be able to overcome them so therefore we aren’t ever held in that much suspense.

Featuring several clever action sequences, one very fake looking crocodile disguise, and Bond dressed like a clown in a circus; this 13th Bond film is the beginning of the end for Moore.  Though perfectly serviceable, the franchise was starting to drift away from the central character that Ian Fleming had so cleverly crafted.