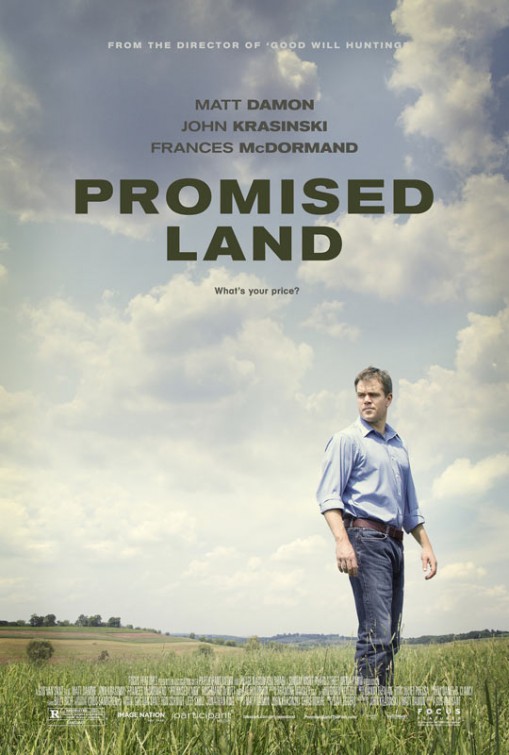 Synopsis: A salesman for a natural gas company experiences life-changing events after arriving in a small town, where his corporation wants to tap into the available resources

Review:  The ads for Promised Land make it seem like it’s a cross between Erin Brockovich and Silkwood — while there is a definite David vs. Goliath element to the plot, it turns out that the film is less interested in the business side of things and more focused in the subtle exploration of what constitutes the “right thing to do”.   In the end, the film is perhaps too subtle for its own good and ends up barely making a blip on the radar despite even keeled direction and strong performances.

Damon and McDormand are representatives for a natural gas company that is looking to lease precious farm land from a community sitting on top of a 150 million dollar payload.  Instead of going in as smarmy salespeople, the two seek to ingratiate themselves with the townspeople so they can make their pitch with ease.  It’s a tricky balancing act to perform; we aren’t sure if they believe what they’re saying/selling so it’s hard to know what to discredit.

We’re shown early on that the team of Damon/McDormand are at the top of their field, so it’s no surprise that any sort of problem with this particular town takes a while to become evident.  It’s the combination of an informed retiree (Holbrook) and the appearance of an environmentalist with a personal story to tell (Krasinski) that throws two very big wrenches in what should have been an open and shut sales trip.

I appreciated that the film kept the big city business element out of the picture – there’s very little involvement from the billion dollar company that has sent Damon and McDormand out to close the deal. Instead, we watch as the two continue to meet with their target audience to not only sell them on their plans but stand up to the claims that their mining procedures would eventually turn the soil and water toxic.

Damon and Krasinski wrote the screenplay from a story by David Eggers and the piece is very timely.  As we continue to deplete our natural resources and fight for oil overseas, there is the thought that we need to look within our own soil for a way to fuel our country.  As farming begins to disappear across the US, the leasing of land to natural gas companies may be the only way for families and communities to survive.  To its credit, the movie does make good points on both sides but because it never really takes a solid stand either way there is a feeling of neutrality that may leave some unsatisfied.

Reteaming with his Good Will Hunting director Van Sant, Damon delivers a nicely nuanced performance — though I found it hard to believe that it’s this particular town that opens his eyes to problems within his company.  A shoehorned semi-romance with a teacher (DeWitt) doesn’t seem to jive with the rest of the movie and the implied competition with Krasinski for her hand feels a bit too pat.  Speaking of Krasinski, it’s clear that he’s got more in him than the character he’s played for nine seasons on television’s The Office but it’s strange that he’s written himself such a one dimensional role.  It also bugged me that his environmentalist character is very concerned about chemicals in the ground but could care less about scattering hundreds of pamphlets around town and Damon’s truck.

It’s really McDormand that quietly steals the show from her male counterparts.  Clearly realizing this is simply a job to support her family, she can be equal parts bulldog and supportive parental figure.  Her scenes with a local business owner (Welliver) have the kind of on the money feel that the film needed more of.  Wearing little make-up and dressed down, she looks the part and acts it wonderfully.

Swede cinematographer Linus Sandgren helps Van Sant’s even-keeled direction with a nice eye for small town life.  There are the requisite shots of American flags, county stores, and endless fields of harvest but it’s straightforward enough to not feel gimmicky.  Danny Elfman’s score is a far cry from the work he’s done for Tim Burton and it’s nice to hear something smooth and considerate from him.

Promised Land is a perfectly fine film with good people doing good work.  It’s going to fade from your memory quite fast and probably isn’t a movie you’ll revisit after it’s over.  Perhaps it’s too small of a film to really have an impact on the big screen – had it been made for television it might have worked out better.  That being said, it’s worth a watch if you’re a fan of anyone involved or some of the stronger thematic material it covers.