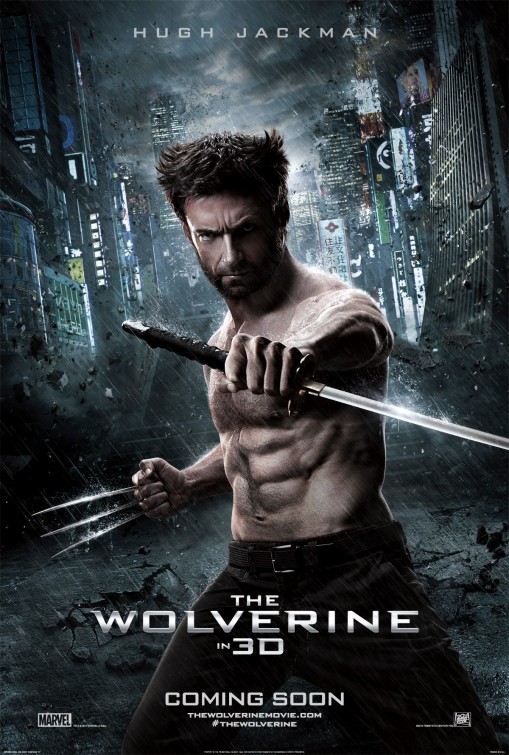 Synopsis: Summoned to Japan by an old acquaintance, Wolverine becomes embroiled in a conflict that forces him to confront his own demons.

Review:  It’s hard to imagine it now but audiences very nearly had a different actor playing Logan/Wolverine when the original X-Men movie was released back in 2000.  Though several A-List stars were sought for the role, their fees provided intimidating and newcomer Dougray Scott was cast as the mutant hero with the Adamantium claws.  When Scott’s work on Mission: Impossible 2 ran long he was swapped out for total unknown Hugh Jackman and the rest, as they say, is cinematic history.

Thirteen years later Jackman (Les Misérables) has suited up again, marking his sixth appearance as the man with the questionable sideburns and some serious anger issues.  Though he stumbled with 2009’s misguided X-Men Origins: Wolverine, Jackman isn’t one to throw in the towel easily so it was back to the drawing board.  After several stops and starts his mea culpa is here, simply called The Wolverine and it’s a much more enjoyable outing, taking the character into some needed dark territory which gives Jackman a chance to infuse a fair amount of gravitas to a character born from a comic book.

Still…a little bit of brooding goes a long way and ever since Christopher Nolan re-invigorated the Batman franchise by giving The Dark Knight a dark arc it seems like every superhero action film since feels the need to follow suit.  That resulted in a troubling Man of Steel but The Wolverine just makes it out from the heavy pathos unscathed…though often times the Man with the Iron Claws gets dangerously close to being dragged down alongside the Man of Steel.

What helps the movie immensely is the nice amount of distance from everything else in the world of X-Men.  Though I love a good mash-up of characters as much as the next geeky fanboy, Jackman’s haunted character needed some room to stretch his claws.  Taking place largely in Japan, the script from Mark Bomback and Scott Frank feels more like a moody crime drama than it does a large-scale action film – don’t be scared by that statement because trust me, the film works more often than not.

That’s mostly thanks to Jackman who also seems more invested in the film this time around. Jackman is an engaging presence both on and off screen but in this film he doesn’t shy away from letting his dark side show, especially as Logan continues to be haunted by memories of Jean Grey (Famke Janssen).  When he’s located by a mysterious woman (plucky newcomer Rila Fukushima) and brought to Japan, he gets neck deep into trouble over unsettled scores and family secrets that turn out to involve him more than he thinks.

Aside from Jackman, the women in the movie are the most memorable.  I was pretty fascinated with Fukushima as well as model-turned actress Tao Okamoto as the daughter of a man from Logan’s past.  Though both actresses are very early in their careers, they acquit themselves nicely…even if Okamoto is somewhat clumsily thrown into a “I saw that one coming” romance with Jackman.  As a viper-like villainess, Svetlana Khodchenkova (Tinker Tailor Soldier Spy) looks the part right down to her perfectly placed evil mole but her voice is unfortunately awkwardly dubbed.  This makes most of her work fairly distracting and one wonders why director James Mangold couldn’t have figured out a better solution.

Perhaps a tad overlong and lacking the larger than life action sequences that the franchise would seem to dictate, The Wolverine begins to run out of steam around the 90 minute mark.  With about 40 minutes left, that isn’t great news but thankfully several batteries are recharged near the end and through a not-to-be-missed-if-you-know-what’s-good-for-you credits sequence.

If I’m being honest, I didn’t really mind the last stand-alone Wolverine film.  Yes, it wasn’t the right movie for anyone involved but it wasn’t a disaster like many that have come before and after it.  I know that Jackman wanted to get it right this time and for the most part the film accomplishes what it wanted to.  It corrects some past mistakes and sets up future installments for not only more Wolverine films but other X-Men adventures in the years to come (X-Men: Days of Future Past is set for release in May of 2014).  Is it the best film that could have been made…no, it’s not.  Still, it’s an entertaining entry that rates high on the popcorn scale.