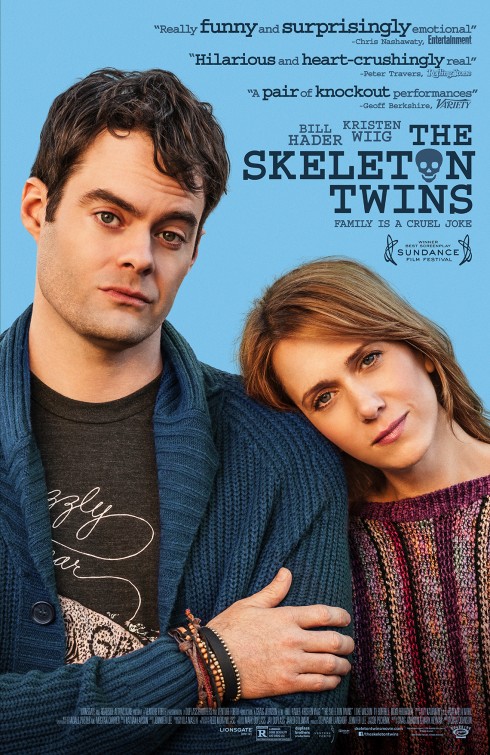 Synopsis: Having both coincidentally cheated death on the same day, estranged twins reunite with the possibility of mending their relationship.

Review:  I blame Saturday Night Live for not liking The Skeleton Twins more.  I mean, stars Bill Hader (The Disappearance of Eleanor Rigby: Them) and Kristen Wiig (Friends with Kids, The Secret Life of Walter Mitty) should shoulder most of the responsibility for the film feeling like an extended sketch from the tail end of the long-running late night show but it’s easier for me as a fan of both to just blame the show that brought them national attention.

As much as I know I should, it’s hard to separate out Hader and Wiig from being comedians and allow them the opportunity to sink their teeth into this familial drama about two twins brought together after a suicide attempt.  Surprisingly (said with the utmost sarcasm) there are a lot of outstanding family issues that need to be settled and, wouldn’t you know it, over the course of the film they all seem to get dealt with in one way or another in director Craig Johnson’s hum drum script he co-wrote with Mark Heyman.  From a visit with their absentee mother (an all too brief appearance by Joanna Gleason) to Hader’s reunion with his first love (Ty Burrell, Muppets Most Wanted) to Wiig’s ongoing issues with her husband (a surprisingly strong Luke Wilson) this is one of those kitchen sink movies where everything gets thrown in just to make sure no dramatic stone is left unturned.

When Hader and Wiig are apart, both actors turn in some impressive work that shows of their dramatic chops nicely.  Hader especially has some nice moments as he comes to grips with his life not being in any shape or form what he intended it to be.  It’s when the two are together in extended sequences involving lyp-syncing Starship’s “Nothing’s Gonna Stop Us Now”, getting high on laughing gas, and dressing up for Halloween that I started to feel like these were scenes from the very late night writing sessions Saturday Night Live is historically known for.  These goofball moments could have worked in a different film with a less somber tone but here they don’t fit with the rest of what Johnson has set-up.

Still, it’s a short ride and one that does go by quickly even with some fairly major bumps.  And it should be noted that it’s a huge improvement over Wiig’s last attempt at a dramadey, the dreadful Girl Most Likely.  A complicated film made more so by Wiig and Hader’s chemistry that reads more collegiate than familial, The Skeleton Twins doesn’t have enough meat on its bones to make much of an impression.