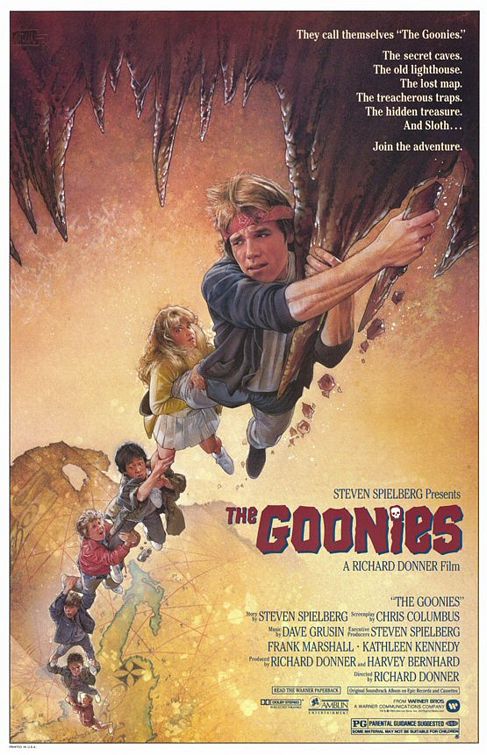 Synopsis: In order to save their home from foreclosure, a group of misfits set out to find a pirate’s ancient treasure.

Review: I was still a tad too young to catch The Goonies during its first run in theaters during the summer of 1985 but boy do I wish I had.  Though I’ve seen it countless times since then on television, at sleepovers, and at any number of midnight screenings I would have loved to have been there on its June opening weekend.

Released in that magical early to mid-‘80s time when Steven Spielberg had his hand in everything, The Goonies is, like 1982’s Poltergeist, one of the few films that Spielberg either wrote or provided the storyline for and its themes of friendship, family, and love of home is classic Spielberg.  Focusing on a group of friends that hunt for a fabled pirate’s treasure as a way to help their families fight off land hungry developers, it may be turning 30 years old in 2015 but it’s held up remarkably well.

That’s partly due to the fact that the film isn’t a splashy effects driven kind of summer fare that were starting to become de rigueur in the ‘80s.  It’s filled with mostly practical effects as the gang of Goonies outwit escaped gangsters (the marvelously droll trio of Anne Ramsey, Robert Davi, and Joe Pantoliano) and maneuver past a series of dangerous booby traps as they track down the hidden fortune.  Because it’s so centered on the friends themselves and not popular culture of the day, it works as both a time capsule of teen-friendly entertainment and a timeless exercise in big thinking adventure.

There’s a lot of ground to cover in two hours and watching it again recently I marveled at how fast it gets going.  Director Richard Donner (Ladyhawke) had a lot of plot points and characters to juggle and he manages (with the help of Chris Columbus’s slick script) to give each actor their own time to shine.  It helps that the young cast is quite engaging, and it was no shocker that most went on to successful careers as adults.  Sean Astin (Rudy) makes for a splendid every-boy kinda lead, young enough to not be a hormonal threat to tween girls and old enough for boys his same age to want to be like him.  Future Oscar nominee Josh Brolin (Inherent Vice) is his understanding older brother while Corey Feldman, Ke Huy Quan, and Jeff Cohen are his partners in goofball crime.  Martha Plimpton and Kerri Green prove themselves to be more than the token sassy girl/pretty girl (respectively) because Columbus treats them as equals to the boys.

If I’m being honest the movie starts to lose steam in the last fifteen minutes, right when it starts to really count.  I’ve been known to watch the first 90 minutes before either conking out or switching to a different channel because the dénouement and wrap-up have always felt like a let-down after all that had come before it.  Even so, the film is downright hilarious at times (mostly thanks to Cohen’s uproarious performance as a roly-poly mini used car salesman of a character) and still sucks me in to the Goonies adventure of a lifetime almost from the get-go.

Rumors abound that a long-awaited sequel (or stage musical!) are in the planning stages and I’d like to respectfully request that neither come to fruition.  I don’t think the film needed a sequel in the first place and if a second installment was ever in the works that should have been taken care of in the late ‘80s or early ‘90s.  And a musical?  Yeesh…though a Ballad of One-Eyed Willie might become the new Defying Gravity if they play their cards right…