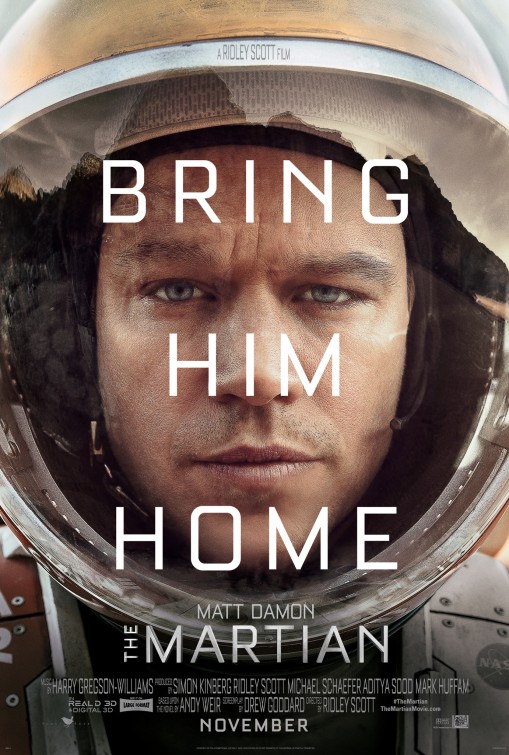 Synopsis: During a manned mission to Mars, Astronaut Mark Watney is presumed dead after a fierce storm and left behind by his crew. But Watney has survived and finds himself stranded and alone on the hostile planet. With only meager supplies, he must draw upon his ingenuity, wit and spirit to subsist and find a way to signal to Earth that he is alive.

Thoughts: There’s a Mars curse in Hollywood and everyone knows it. Numerous films about the red planet have been released over the years and, save for the 1990 version of Total Recall, they’ve all been belly-up flops. True, it’s not as if these were great films to begin with…like the 2000 double-header of Brian DePalma’s Mission to Mars and Anthony Hoffman’s Red Planet. John Carter was savaged by critics but it was better than it was given credit for.

Now here comes director Ridley Scott (Prometheus, Blade Runner) with his bid to break the Mars curse and it looks like he may have cracked the code. Though the first trailer clocks in at an astounding 3+ minutes, it’s a brilliantly edited preview of the November release…giving us some idea on what to expect but not foreshadowing what’s to become of an American astronaut stranded on Mars.

Based on Andy Weir’s 2014 novel and adapted by Drew Goddard (Cabin in the Woods), Scott has gone big with the visuals and cast. After sharing no scenes in Interstellar, I’m wondering if Matt Damon (Promised Land) and Jessica Chastain (Mama) will meet up again in this space tale. There’s also Jeff Daniels (Terms of Endearment), Kate Mara (Iron Man 2), Sebastian Stan (The Apparition), Chiwetel Ejiofor (12 Years a Slave), Sean Bean (Mirror Mirror), and Kristen Wiig (Girl Most Likely…).