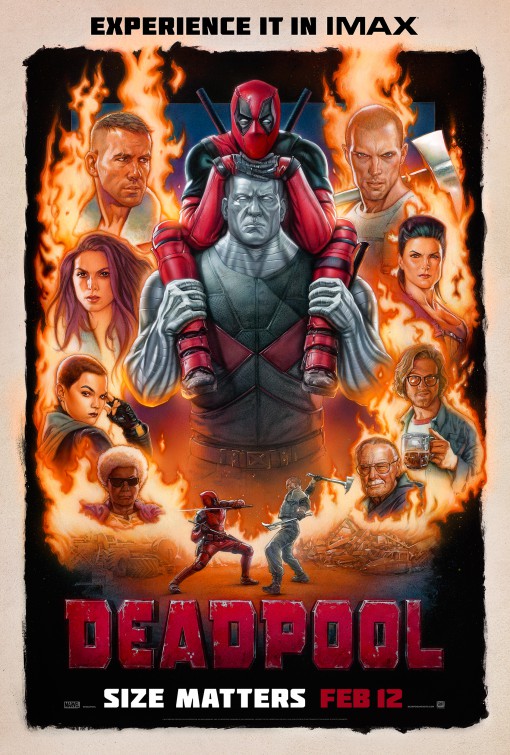 Synopsis: A former Special Forces operative turned mercenary is subjected to a rogue experiment that leaves him with accelerated healing powers, adopting the alter ego Deadpool.

Review:  The first time I was supposed to see Deadpool, I sat in the theater for close to an hour while the projectionist and theater manager tried desperately to get the movie to  play.  We had just come in from the cold, the theater was hot, and the audience grew more restless as the minutes ticked away.  In the end, the technical difficulties sent us back into the chill and I had to wonder if a movie that relied so much on its smart-alecky marketing had pulled the ultimate prank on critics by getting us all ready to go and then leaving us hanging.

At the follow-up screening several days later I was just ready to get it over with.  Growing wearier with each passing comic book turned movie and already feeling strained with months of campaigns featuring Marvel’s wise-ass anti-hero lampooning itself and other similarly themed films, it was finally time for the long in the planning franchise starter to put up or shut up.  And put up it did, emerging as the first shamelessly entertaining movie of the new year.

First introduced awkwardly in the unkempt X-Men Origins: Wolverine, there was a hint in the final moments of a Deadpool spinoff that wound up bumped to the back burner when X-Men Origins: Wolverine tanked with audiences and critics (for the record, I didn’t mind it much).  While 20th Century Fox licked its wounds and threw money at a new path for the X-Men, memories of the Deadpool character started to become a distant memory.  With the rise in popularity of cross-over pictures in The Avengers franchise and soon with Batman/Superman, Fox looked for ways to cross-pollinate their own Marvel niche to co-exist with the X-Men and headline their own movie.  Finally… Deadpool was back in business.

Returning as Wade Wilson/Deadpool is Ryan Reynolds (Woman in Gold), an actor I’ve long since learned to expect little from. His sardonic flair mixed with frat boy good looks only took him so far on my popularity meter…so I wasn’t prepared for how perfect he meshes with the overall style and tone of the film.  Finally, he’s able to capitalize on his sharp snap and make it an actual benefit to a movie, rather than a detraction from the overall impact.

Opening with a ballsy title sequence that lets you know right away egos are being checked at the door, we meet up with an action sequence already in progress.  Bloody, violent, vulgar, and go-for-broke, the film starts out firing on all cylinders and manages to keep up that momentum throughout the remaining 105 minutes.  Flashing back to a time when Deadpool was just ordinary, cancer-striken, tough as nails yet romantic softie Wade Wilson, we gradually see how Wade’s desperate attempt to prolong his life backfires and leaves him with the power of regeneration but looking like a thumb pruned from too much time in the ocean.

Vowing revenge on the man that made him (Ed Skrein, The Transporter Refueled), Deadpool slices his way through a host of bad guys and girls (including Gina Carano, Haywire, as a powerful henchwoman) while trying to reconnect with his girlfriend (Morena Baccarin, Spy, a zinger of a match for Reynolds) and staving off the requests to join Professor Xavier’s elite X-Men.

I love a film that has a little spring in its step and wink in its eye and Deadpool hits the target squarely, never taking itself too seriously yet not becoming an outright spoof of itself.  Like it’s star/lead character, no entendre is left un-doubled and no fourth wall remains unbroken.  There’s references to other X-Men and the actors that play them, a dig at Reynolds stint as People’s Sexiest Man Alive (and recently named Sexiest Dad Alive!), and more profanity gore, and nudity (yep, that’s Reynolds going the full monty) than you’d ever find in the PG-13 recent big budget tentpole films,

Usually I’d be nervous with a first time director and screenwriters with a spotty track record but Tim Miller brings his history as visual artist and blends it nicely with Zombieland’s Paul Wernick and Rhett Reese’s cheeky tale.  Sure, some stuff doesn’t work like T.J. Miller’s (Transformers: Age of Extinction) deadpan comic second banana that feels extraneous when Reynolds already is more than pulling his weight in that department.  I’d also like to have seen more with Deadpool’s grumpy geriatric blind roommate played by Leslie Uggams but there’s only so much you can pack into a respectable running time.

As always make sure to stay until the end of the credits …and if you do you’ll have one upped me because preview audiences only saw one of two post-credit sequences.  Usually I’d wait to catch what I missed when it arrives on video but Reynolds is so in his element and the film so consistently entertaining that I’m already considering a return visit.

*A final note…parents, please for the love of Stan Lee do not take your kids to this. It’s rated R for a reason, make this the film your kids can look forward to watching when they reach the right age.  This is most definitely not for youngsters.