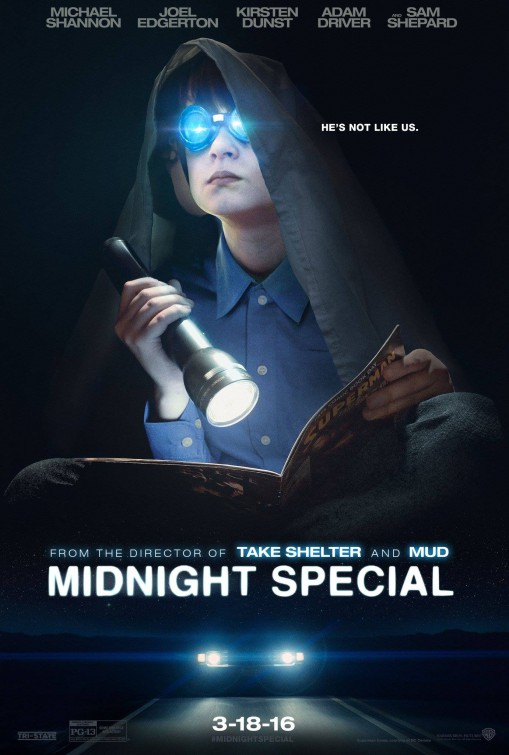 Synopsis: A father and son go on the run after the dad learns his child possesses special powers.

Review: Hot on the heels of 10 Cloverfield Lane comes another film where spoilers and too much information will pretty much ruin your enjoyment.  My best advice, dear reader, is to go in to Midnight Special with the least amount of knowledge available.  Even if that means you bookmark this page and come back to it after you see it, I won’t mind because I want you to get the maximum impact out of the newest feature from Jeff Nichols (Mud, Take Shelter).

OK…you’re either brave enough to trust in my spoiler-free pledge or you’ve just returned from seeing Midnight Special…either way…thanks for being here!

Let’s start off with what I can divulge, which is that Midnight Special is one of those rare movie-going experiences where the filmmakers are wise enough to not let audiences get too far ahead of the events that transpire.  In fact, don’t be ashamed to admit when the movie starts you have no clue what’s going on…it’s ok…I felt the same way.  Nichols plunges you right into the middle of the cross-country pilgrimage of a father (Michael Shannon, Man of Steel) and his son (Jaeden Lieberher, St. Vincent, Aloha) that turns out to be a trek into the unknown.

Nichols draws on elements from old-school paranoid chase films and Steven Spielberg’s late 70s/early 80s sensibilities to fashion his tale of a boy who may or may not possess special powers that the government wants to exploit and who members of a religious cult in the Texas boondocks use to guide their sermons and instruct their belief system.  Shannon has taken the boy from the cult and roped in his childhood friend (Joel Edgerton, The Great Gatsby) to help transport them both to an unnamed location only the boy seems to know.

Picking up the boy’s estranged mother (Kirsten Dunst, Bachelorette) and avoiding a curious NSA analyst (Adam Driver, Star Wars: Episode VII – The Force Awakens) along the way leads to more unexplained phenomena that keep the military and spiritual disciples in hot pursuit.  Through it all Nichols never tips his hand as to what the outcome will be, throwing in multiple surprise moments that act as nifty curveballs in an already eventful ballgame.

Nichols is making his large studio debut with Midnight Special and it would have been easy to style an easily accessible commercial feature and pick up a swell paycheck.  Instead, Nichols has produced a crowd-pleasing sci-fi drama that’s exciting, entertaining, and downright refreshing in its execution.  Even the ending, which could have gone oh so wrong and still may be hard to swallow for the more jaded flock amongst us, feels just about perfect.

One of the nicest surprises here is Shannon’s sensitive turn as a father willing to protect his son at all costs.  Shannon tends to give me the willies but he’s arguably the least creepy he’s ever been here.  Edgerton continues his run as a dependable presence whether in a supporting role or as the leading man. He’s given a lot of good material here and makes the most out of what could have been a low wattage auxiliary role. Driver is well-cast too, though he tends to come up lemons when he’s asked to play overly nebbish and Dunst nearly outshines them all with her understated and delicate performance that’s believably maternal.  The film revolves almost entirely around Lieberher and he proves again he’s a young actor to watch, infusing every line or wordless moment with a truth that’s hard to fake.

They say the fun is in the journey, not the destination and that’s apropos here.  While the ending to Midnight Special is sure to divide audiences, there’s little denying that the events leading up to it are mighty captivating.  Definitely check this one out.