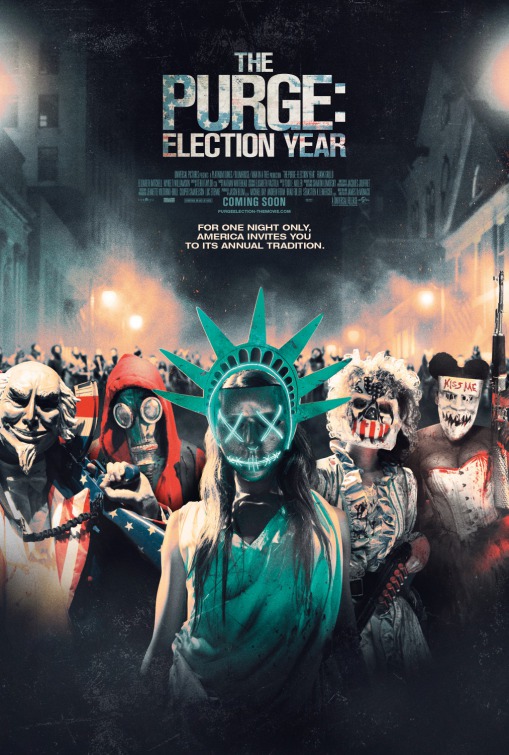 Synopsis: Two years after choosing not to kill the man who killed his son, former police sergeant Barnes has become head of security for Senator Charlene Roan, the front runner in the next Presidential election due to her vow to eliminate the Purge.

Review: I’m not sure if The Purge: Election Year was part of writer/director James DeMonaco’s long-term Purge franchise plan from the start, but with Americans steeling themselves for another bitter election in November and the continued struggle with gun control it’s arrival is anything but poorly timed. Now, the movie itself is fairly run of the mill with performances that range from metered investment to foamed-mouth zeal but, like its two predecessors, its morality tale is disquieting and prescient.

What started as a home invasion thriller in 2013’s The Purge morphed into a rough and tumble sequel in 2014’s The Purge: Anarchy. Both films pretty much disintegrated in their third acts and The Purge: Election Year also struggles with making it over the finish line with any semblance of order…but for me it was an improvement over the previous entries thanks to a strong build-up.

Set in the year 2025, Election Year brings back Frank Grillo from Anarchy as Leo Barnes, no longer out for revenge for his son’s murder but instead focusing on protecting a beacon of hope to end the yearly Purge. That hope is Charlene Roan (Elizabeth Mitchell) an idealistic senator hoping to win the approaching election to unseat the bureaucratic nebula called the NFFA (New Founding Fathers of America) that instituted and continue to support the annual Purge. Running a campaign based around her desire to outlaw the yearly Purge, she’s made a number of enemies from the elite NFFA who conspire to use the pending Purge to get rid of her.

Though their methods of dealing with conflict differ greatly, Roan and Barnes are united in knowing the horrors the Purge can bring. When Roan is double-crossed by agents meant to protect her, Barnes teams up with an inner-city crew to keep Roan alive until the night is over. As in Anarchy, Election Year introduces us to another set of characters whose storyline will intersect with Barnes and Roan sometime during the night. Those other characters are a deli owner (Mykelti Williamson), his immigrant employee (JJ Soria), and a reformed tough-gal (Betty Gabriel) who has left her Purge bloodlust behind and helps transport victims to a triage center instead.

A solid first 45 minutes gives way to another Purge night filled with gory killings and ordinary citizens turning into crazed psychos. All manner of crime is legal for one night…yet DeMonaco never focuses on the jaywalkers, embezzlers, mattress tag rippers, and movie pirates. I suppose it would be tough to generate a thrill from following people that steal stop signs all night, but when we see yet another shot of someone getting an arrow through the head or turning up at the business end of a guillotine it does make me wish for more white-collar crimes.

The film has several endings, none of which are very satisfying. Most of the bad guys are dead, some of the good guys are…but nothing feels finalized or complete. Grillo (Captain America: The Winter Soldier) and Mitchell are strong leads and I liked what Gabriel was giving us. Williamson gest a full meal out of his scenery chewing while Raymond J. Barry and Kyle Secor (The Doctor) devour the film like they’re at an all-you-can-eat buffet. I have to make some space for Brittany Mirabile for her absolutely unhinged schoolgirl turned savage out for payback on Williamson and his store. I’m not saying it’s a good performance, but credit Mirabile for having gusto to just go for it.

It feels like this could be the last entry in The Purge franchise and that’s AOK with me. There’s not a lot further DeMonaco could take the concept/characters and the true finale hints at a Purge-less future that may be even scarier…mostly because it reminds us of the here and now.