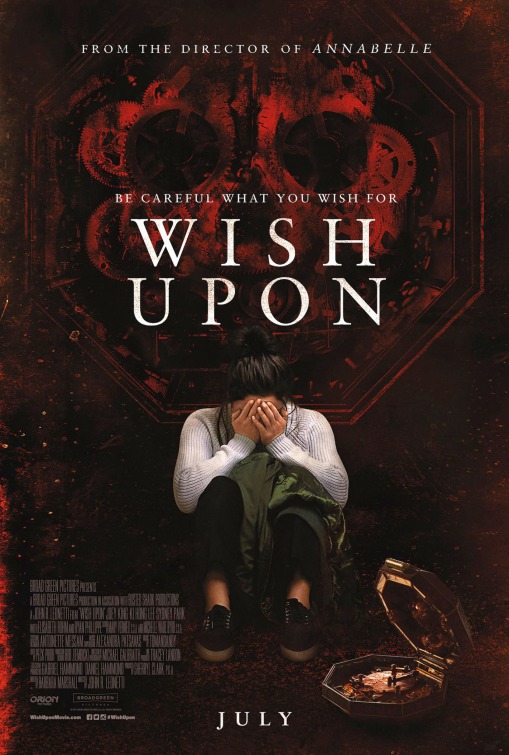 Synopsis: A teenage girl discovers a box that carries magic powers and a deadly price for using them.

Review: This movie sucks. Let’s just get that out there at the start so you can never ever say you weren’t warned. I’m pretty forgiving when it comes to these types of PG-13 horror flicks but even I have a breaking point. Maybe it was because I lament the mid-level studio film that’s slowly disappearing in favor of endless sequels and franchise starters, but I really was rooting for Wish Upon to be 90 minutes of harmless fun. Be careful what you wish for.

Supposedly, the budget for Wish Upon is a staggering 12 million dollars, not exactly cheap considering decent horror films like Split, Insidious, The Visit, and The Purge franchise were made for considerably less. I’m not exactly sure where that 12K was spent. It surely wasn’t on the director, John R. Leonetti (Annabelle) who doesn’t seem to understand how to assemble a movie, much less how to create any kind of sustainable tension. It definitely wasn’t on Barbara Marshall’s threadbare amateurish script which feels an outline of an idea never fully fleshed out. It certainly wasn’t spent on a decent casting director based on a ensemble of forgettable faces almost entirely dead behind the eyes.

A Chinese wish box is the MacGuffin at the center of our tale. Given as a gift to high schooler Clare (Joey King, White House Down) by her dumpster diving dad (Ryan Phillippe, I Know What You Did Last Summer) it’s a good thing Clare is taking Intro to Chinese because she quickly translates that the box will grant her seven wishes. If only she had been in an AP class, she’d have been able to see the warning that went along with it. See, for every wish granted someone she knows will meet a gruesome end…well as gruesome as Wish Upon’s teen friendly rating will allow. As she uses her wishes up on important things like wealth, admiration of her peers, the attention of a hot senior, revenge on a tyrannical mean girl, and for her dad to be less embarrassing (no, really), she gets ever closer to the final wish for which she’ll pay dearly.

A big problem is that our lead protagonist vacillates between being so bafflingly clueless and knowingly reprehensible that you feel nothing for her. It doesn’t help that King is far from up to the task of carrying a movie on her own, too often looking like she can’t decide if she wants the chicken or the beef for lunch. Phillippe is a sad sack in his taped on beard that mysteriously grows and shrinks in size and the less said about his badly faked saxophone playing, the better. Though she’s etched herself on a commercially large canvas, I at least appreciated Sydney Park’s energy as King’s sassy friend…she’s light years better than Shannon Purser (crazily Emmy-nominated as Barb from Stranger Things) who’s acting chops are so green she literally can’t walk and talk onscreen at the same time.

I’m wondering if the studio gave Leonetti and editor Peck Prior a note to tighten the film up because there’s an alarming number of short scenes that don’t make sense when stitched together. Some people are barely introduced only to be swiftly killed before you ever know their name.   It’s just a mish-mash of plot contrivances spewed forth with no one to corral them into anything resembling a cohesive product. As it strenuously plods to its conclusion, the shrieks shrink and the laughs loom large.

It’s not an entirely thumbs down idea for a movie if I’m being totally honest and with a better director, a more polished screenplay, and just more risk-taking in general (clearly the film was edited down from a gorier R-rated escapade) something far more entertaining could have been accomplished. There’s a myriad of problems with countless aspects of the movie, so many in fact that if the film has any redeeming quality it’s that it could be used as grave warning for future filmmakers on just how badly you can screw up.