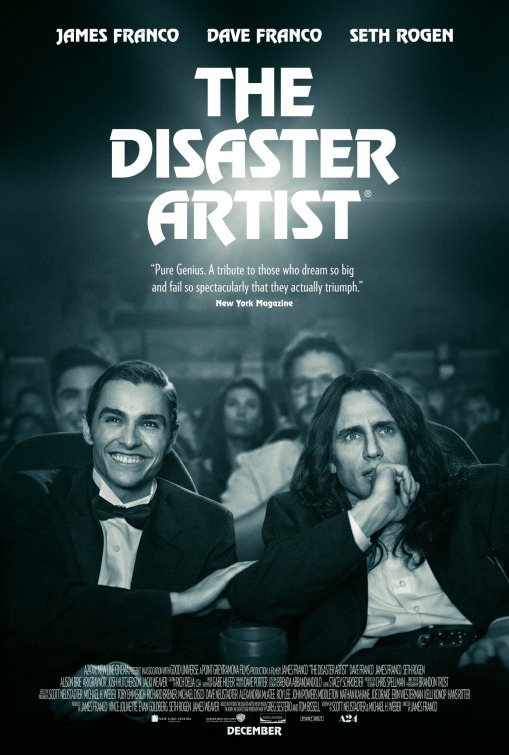 Synopsis: When Greg Sestero, an aspiring film actor, meets the weird and mysterious Tommy Wiseau in an acting class, they form a unique friendship and travel to Hollywood to make their dreams come true.

Review:  There’s a classic movie theater in my town that used to show the best Midnight Movies.  Before they went digital, they often featured classic movies from the ‘70s and ‘80s in all their celluloid glory.  It was at this theater I saw a print of Adventures in Babysitting, Friday the 13th, The Breakfast Club, and introduced several horrified friends to Showgirls.  Then the financial realities of shipping film stock and the public need for crystal clear projections led the theater to remodel and slowly eliminate these wonderfully nostalgic screenings.  While The Rocky Horror Picture Show and Serenity remained bewildering stalwarts on the roster, another movie started to be featured that I’d never heard of and didn’t have any interest in seeing.  This movie was The Room.

Released in 2003 and now regarded as one of the worst movies ever made, I didn’t experience The Room until about a month ago at a screening organized in anticipation of the release of The Disaster Artist.  If you’ve never seen the movie, I highly encourage you to take it in at a theater with an audience of like-minded adults.  The crowd I saw it with were experienced in the jaw-dropping insanity of writer/director Tommy Wiseau’s crazy drama and their reactions pushed the overall viewing of the movie into one of my favorite nights in a theater of 2017.  Yes, the movie is terrible but it’s so joyful in its awfulness that its impossible not to be hypnotized by it.  I can’t imagine watching it at home with friends or, worse, alone.  It’s meant to be seen in the theater.

Working with a script from Scott Neustadter and Michael H. Weber, adapted from a book written by The Room’s original co-star Greg Sestero (played here by Dave Franco, Now You See Me), director James Franco has turned in a loony albeit quite entertaining film that feels like his most sophisticated exercise to date.  Franco (Sausage Party) not only excels behind the scenes, but it’s been years since he’s been as good in front of the camera as he is playing Wiseu, nailing the mysterious man’s personal tics and hard to place accent.

Charting the development of the film from Sestero’s point of view through its troubled creation to opening night, James Franco has surrounded himself with some of the best and brightest up and coming stars of today as well as featuring cameos from a treasure trove of Hollywood royalty.  One minute Zac Efron (The Greatest Showman) is turning up in a brief role as a hysterically memorable character from The Room and then Sharon Stone (Lovelace) appears as Sestero’s man-eating agent.  Keep your eyes out for Melanie Griffith and Bryan Cranston, too!  It’s so chock full of famous faces I’ll likely need to see it a second time to catch everyone that floats by onscreen.

This is a film aimed squarely at fans of The Room so better do your homework before trekking to the theater to see it.  Scenes, performances, and situations are painstakingly recreated as evidenced in the credits which put the original film and this tribute side by side to show how close Franco got to shot for shot perfection.  Going in with no working knowledge of the film that inspired it will likely cause most of the jokes to go whizzing past, robbing you of the plethora of fun to be had.  Some theaters are doing a double-feature and I’d suggest seeking those out and making a crazy night of it!

I don’t think anyone that heard Franco was making The Disaster Artist ever could have predicted it would come off so well, much less be in the running for several major Oscar nominations in mid-January.  When you think about it, though, making a film about the making of the world’s worst movie is something that seems right up Franco’s alley.  The eccentric actor seems like he’d be a kindred spirit of Wiseau and Franco never seems to shy away from challenging material…the more meta the betta, er, better.