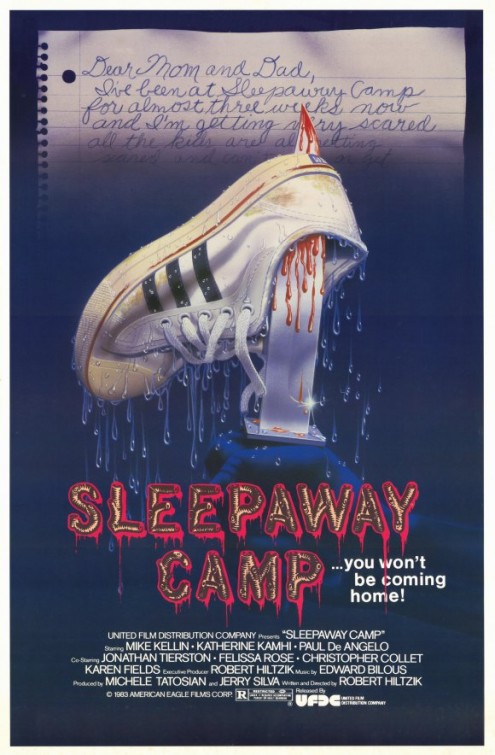 Synopsis: Angela Baker, a traumatized and very shy young girl, is sent to summer camp with her cousin. Shortly after her arrival, anyone with sinister or less than honorable intentions gets their comeuppance.

Review:  Though I combed the shelves of my local video store for all the horror goodies I could find, it took a while for me to get to Sleepaway Camp.  I’m not sure what kept me from it for so long but when I finally did I walked away a bit shell-shocked (more on that later).  I’ve revisited it several times over the years and each time I forget how relatively well made it was considering its budget and where it fell in the slasher genre.  Things were just reaching a fever pitch with every possible holiday and location providing fodder to pit a deranged killer against horny teens.  To have a film released in 1983 about a killer at a camp (hello, Friday the 13th and The Burning) didn’t seem all that interesting…until you get to the end.

After a creepy credits sequence that moves across the abandoned Camp Arawak, we enter a prologue that sees a tragic boating accident befall a family.  Years later, Angela (Felissa Rose), a survivor of the accident, is shipped off to summer camp with her cousin, Ricky (Jonathan Tierston)  A quiet girl with large eyes, she instantly runs afoul of Judy (Karen Fields), the queen bee in her cabinand catches the eye of Paul (Christopher Collet), a friend of her cousin.   While Paul gradually coaxes Angela out of her shyness, strange accidents start to happen around camp and bodies begin to pile up.  The reveal of the killer in the final seconds of the movie is a genuine shock, not just because of who it is (which isn’t much of a puzzle) but how they are introduced.  I’ll say no more because you have to see it for yourself.

Instead of hiring a bunch of twenty-somethings for his film, writer/director Robert Hiltzik wisely cast actual teens to play the campers…which has its pros and cons.  That these kids actually look like people that would be attending this camp gives the movie some authenticity, that is until they start getting killed and then it begins to feel a tad sleazy.  The casting also dictates that the movie isn’t built around copious nudity or exploitative situations which is one way this movie sets itself apart.  The kills are well staged but budget restrictions force Hiltzik to get creative and imply more than he shows, to generally effective results.

Another drawback to casting younger actors is that they haven’t developed much technique by this point and many performances are too broad which becomes grating as the movie goes on.  Even the adults seem to be gnawing on every piece of scenery they can find, many gaining laughs for their line readings that don’t seem to make total sense.  Add to that some thick New Yawk accents from several actors and it almost becomes an unintentional farce.

Still, the movie plays quite well for an 84-minute low-budget horror movie.  The music is sinister and Hiltizik feels like a director with good ideas.  Take the opening credit sequence in the empty camp.  As the camera pans over the vacated cabins, tennis courts, and activity center, Hiltzik overlays ghostly sounds of when there were people in these areas.  It sets a spooky tone right away and one he largely maintains over the course of the film.  Leading to its boffo ending and through the closing credits, the movie has a strong atmosphere throughout.

Spawning three increasingly ludicrously comic sequels that, while maintaining one specific character, feel like films that exist in another universe, Sleepaway Camp is an above average selection from the mass of similar genre films that were released in the early ‘80s.  It has a cult reputation and deservedly so – even if you know what happens at the end it doesn’t diminish your enjoyment revisiting it a second or third time.