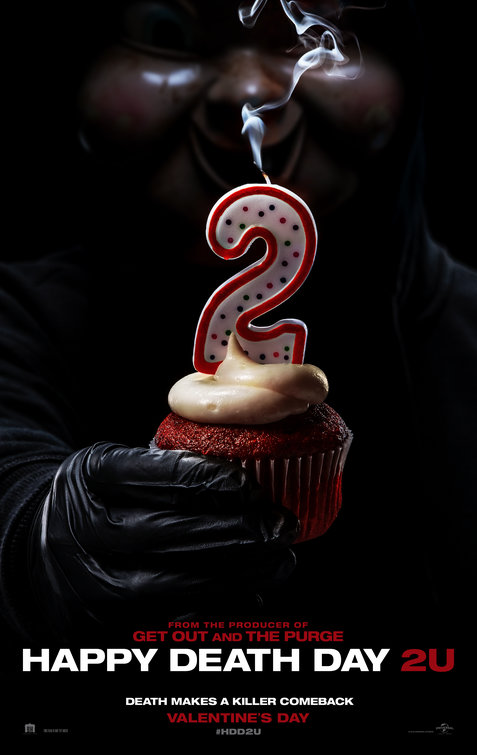 Synopsis: Tree Gelbman discovers that dying over and over was surprisingly easier than the dangers that lie ahead.

Review: I think it shocked everyone when 2017’s Happy Death Day was such a sleeper hit. Sure, it was released on a Friday the 13th and made for a miniscule budget so the target audience was primed and the success factor was measured by a low bar but there was no denying the movie was very likely better than it ever should have been. A fun PG-13 horror spin on Groundhog Day that didn’t have the blood quotient to deter the gore averse or totally turn off the hardcore fans looking for the next great slasher film, the general consensus was that the film took it’s concept capably to the finish line and earned it’s place on the higher end of lighter horror fare.

A little over a year later, Happy Death Day 2U has arrived in theaters just in time for Valentine’s Day and both Blumhouse Productions and writer/director Christopher Landon (Scout’s Guide to the Zombie Apocalypse) have another pleasantly pleasing winner on their hands. Though it’s less of an outright horror film this time around, the movie aims to keep things light when it has to and isn’t above pumping the brakes to take its time navigating through some surprisingly dramatic territory. In many ways, it feels like a superior film to its predecessor because everyone involved knows what they are getting into and doesn’t hold back.

If you haven’t seen the first film and don’t want key plot points spoiled (even though the trailer already spoiled them for you!) then you are free to stop reading now – thanks for visiting! Everyone else, read on for a spoiler-free look at what new directions the sequel takes the action.

Picking up where the first film left off, Tree (Jessica Rothe, La La Land) has discovered who was trying to kill her and broken the time loop that kept her waking up on the same day over and over again. No longer afraid of being killed and having to relive her death day in and day out, she’s settling in with Carter (Israel Broussard, The Bling Ring) when his roommate Ryan (Phi Vu, Pitch Perfect 2) comes into their shared dorm room with some strange news. He’s reliving the same day after being killed the day before…something Tree knows a thing or two (or 11) about.

How and why Ryan gets stuck in the same time loop as Tree is linked to Ryan’s science project that deals with time and space, and when it’s activated again by the Dean of the college trying to shut the study down it sends Tree back into her previous death day cycle. Now Tree is stuck in her old pattern but with new wrinkles as she finds herself in an alternate reality where the previous killer is now a victim, old enemies are friends, and a deceased loved one apparently never died. As she keeps dying in her quest to figure out an algorithm that will send her back to her previous reality, she needs to decide if this reality is better and what she’s willing to sacrifice to save those she loves.

As with most sequels, the stakes are higher and credit should be given to the producers for throwing some more money at this follow-up and to Landon for taking some time to think through the set-up of the next chapter. The logic is still fairly broad and wouldn’t hold up in a court of law but there’s a breezy effortlessness to everything here that makes it all go down without much fuss. The killer out to get Tree becomes a glorified subplot and only shows up again near the end when the action needs a little zap of energy.  Mostly, this is a film that owes more to Back to the Future II than Groundhog Day, with the consequences of changing things in alternate realities playing a part in most everything Tree is thinking about. The performances (particularly Rothe’s) are more assured here and even though production on this one started fairly soon after the release of the original it was nice to see the entire cast (and some extras!) reassembled for this follow-up. Like the first one, Rachel Matthews as Tree’s rival sorority sister gets some of the better moments, even if the outlandish comedy of her faking being a blind foreign exchange student feels like it’s out of a totally different campus frat movie.

At the theater I attended on Valentine’s Day, I was surprised how many of the audience at Happy Death Day 2U were females who apparently had a ball with it. The reactions to the scares were received well and the comedy landed exactly in the right places. It’s horror-lite to be sure but it was an entertaining mix of time-travel comedy and gore-less horror. Blumhouse and Landon obviously are hoping for a third chapter if the mid-credits stinger is to be believed, and I’d be interested to see where they think future time loops could take things.